Jacksonville 50: Every breath you Kate

A FEW WEEKS AGO, I wrote a piece about Fairfax Senior Reporter Kate McClymont's apparent obsession with Craig Thomson.

The article I wrote was about her attack on Thomson regarding two blokes setting up a fund to ensure Thomson can afford a decent defence — something I would consider to be in the public interest.

As I pointed out in the piece she came out with claims that were completely false regarding one of the men who set the fund up, and some ludicrous claims on radio that Thomson should use legal aid for his defence. Clearly, Thomson's salary prohibits him from legal aid — something I would have thought a senior journalist might know, particularly one who covers so many court cases.

There is also the matter of McClymont's Walkley Award winning article that has holes in it bigger than the one that sank the Titanic.

The article titled 'Thomson: new credit card claims' had little to do with Thomson, despite the title. It detailed ridiculous claims about printing costs quoting incorrect numbers; false claims concerning "secret commissions", that were actually invoiced services; and was based on what could go down as perhaps the most flawed investigation in Australian history — with the possible exception of the FWA investigation into the HSU.

The article also went into details of allegations against Michael Williamson, whom Kathy Jackson used to be friends with, before turning on him remorselessly, seemingly in a bid for HSU power.

What you won't read about in McClymont’s articles are details of Jackson's relationship with Williamson, so here is a sample.

Below is the receipt for a pair of Bulgari earrings that were a present for Julie Williamson from Kathy Jackson: 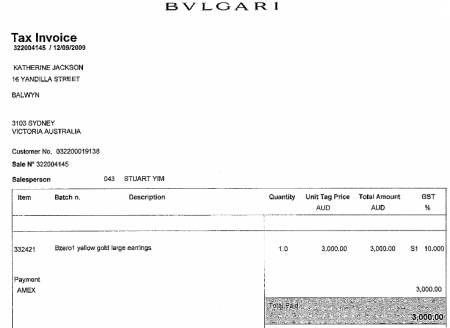 I'm sure that most of the low paid members of the HSU would find it offensive and obscene that Jackson can shell out more for a pair of earrings than they can for a holiday or a car.

The $3,000 earrings show that Jackson was indeed extremely cosy with the Williamson's, despite trying to convince the world she was not; why else would one buy such a hideously expensive present?

I do note, however, that just a few days later, according to HSU Number 3 Branch bank account statements, a $6000 cash cheque was drawn, as can be seen below on the first page, dated 29th September 2009. 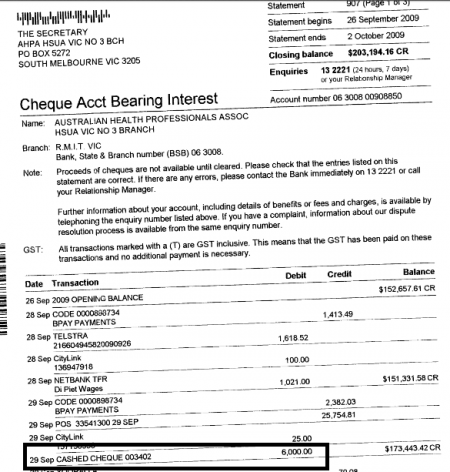 Anyway, as I mentioned earlier, this is one area of Williamson's story that McClymont does not enter into, perhaps because it does not suit her spin on the saga.

Many have questioned whether McClymont has some sort of personal agenda against Thomson.

This would be a huge issue, as the case against Craig Thomson in the court of public opinion has been based, in particular, around her articles. As we now know from her Walkley winning fairytale, McClymont is not one to let facts get in the way of a good story. Her willingness to write falsehoods and lies would be a huge issue, I’d imagine, if it was coupled with some sort of personal vendetta or grudge.

Many would have had such suspicions confirmed over the weekend when McClymont’s article on Chook Fowler and his crotch was published: 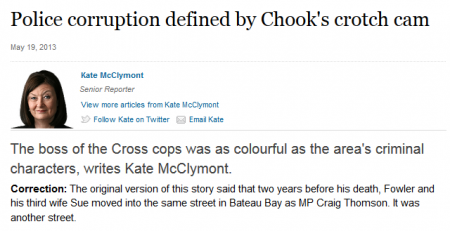 Graham “Chook” Fowler had about as much to do with Craig Thomson as he had to do with Elvis Presley, but Killer Kate couldn't resist throwing in a reference to Craig Thomson.

Below is what was published in Sundays Sun Herald.

'Two years before his death, Fowler and his third wife Sue moved into the same street in Bateau Bay as controversial MP Craig Thomson.'

Here is how McClymont promoted the article on Twitter — a Tweet that still appeared on her page at time of publication: 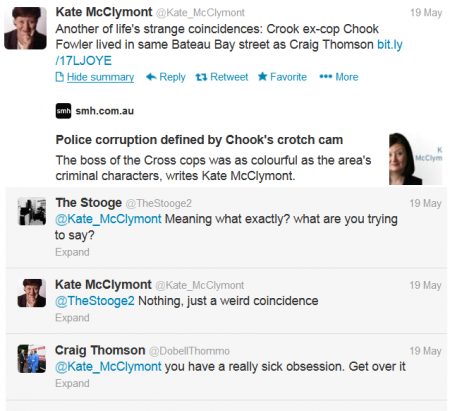 Thomson does not live in the same street that Fowler lived in and he never has. McClymont could have used the oldest tool in the investigation toolbox to verify the Fowler’s address, the phone book — but she neglected to do so. 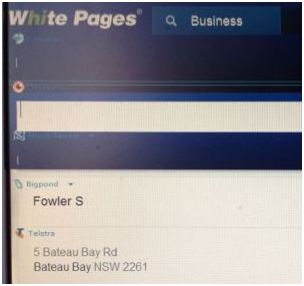 Yes, Thomson may live in that town – and indeed in a street that starts with a B – however that is where the links end.

McClymont has since made an apology to Thomson on Twitter, the article has been amended online  and a correction notice is due to go into Sundays Herald. It will be interesting to see just how prominent that correction is...

It needs to be remembered that Craig Thomson, like him or loathe him, is a democratically elected member of the Australian Parliament.

For McClymont to attack him via the press, based on flawed so-called investigations, the word of dodgy witnesses and outright lies, is not only an attack on Thomson — it is an attack on democracy by a member of the mainstream press.

Who does McClymont really think she is to think she knows better than the people of Dobell?

Her articles, as I have mentioned, have formed the public view of Craig Thomson and have been the lead that other journalists have blindly followed.

Now we know that not only are they based on falsehoods, but they are also the work of someone who seems to have a vendetta.

If a member of the press can do this to a member of Parliament, what could they do to you if they so choose?

Do we deserve better? Yes, I believe we do.

Below is a link to a petition that was started after the evidence was produced that proved McClymont's Walkley Award winning article was false; it is to have McClymont return the Award as it was given based on false pretences.

If you, like me, think that members of the press should not receive awards for vendetta’s and lies, then it is about time we stood up to the mainstream press and showed them that we will not be treated like mushrooms.

As Julia Gillard once said:

(Peter Wicks is a Labor Party member and a former NSW ALP candidate. Catch up on IA's full Jacksonville investigation by clicking here.)