How the ABC spreads doubt about climate change science

Despite the claims of The Australian, the ABC does not possess a" left-wing groupthink" approach to climate change — in fact, says Andrew Kos, it actively sows doubt about established climate science throughout the community in the pursuit of so-called "balance". 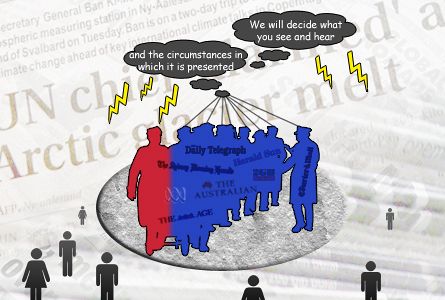 Doubt is our product since it is the best means of competing with the “body of fact” that exists in the mind of the general public. It is also the means of establishing a controversy.
~ “Smoking and Health Proposal”, 1969, Brown & Williamson (former subsidiary of British American Tobacco).

Since the 1950s the causal link between smoking and cancer was confounded by the tobacco strategy of doubt. It was so successful that even as late as the 1990s 30 per cent of Americans were still unable to link it to a particular disease (cancer) even though they had some idea smoking was harmful to their health. Likewise, in the 1990s, the American Food and Drug Administration sought to categorise tobacco as addictive — but were only successful in getting the authority from Congress to do so in 2009.

The ill effects of smoking are now so widely known that it seems almost quaint that it took so long for it to become ingrained in the public conscious. So effective was the tobacco strategy in misinforming the public, in delaying public health regulation and protecting corporate profits, that it became the standard playbook for combating government action against acid rain, the hole in the ozone, second-hand cigarette smoke, and presently with climate change. (See footnote for details on the book that methodically chronicles this development.)

Climate change denialists who seek to distort and reframe the (non) debate on climate change science are guided by this strategy. By courting the media, they circumvent the consensus that has been reached amongst climate scientists in order to muddy and manipulate the understanding of the science by laypeople. They insidiously project the impression it is still a contentious issue in the science community when it is clearly not.

Crucial to the strategy’s success is the employment of prominent scientists who are not climate experts or researchers regularly published in science journals but, instead, are savvy communicators that mix enough half-truths with discredited theories to avoid outright condemnation. Unfortunately, there are not many climate change scientists who possess the clear and cogent language of the late Stephen Schneider and who can then go on to repackage it succinctly for the 30-second media grab. Scientific information is often too complex and nuanced for slick PR — and many scientists don’t see it as their role to engage in public policy debates anyway. This creates a vacant space for climate change denialists to proliferate. They are hardly media shy and consequently some are paid not to be (as you’ll read below).

This strategy of course can only work if there is a complicit media willing to give climate change denialists column inches and airtime. The ABC has been characterised by the right wing commentariat as having (ironically) a ‘left wing’ bias, but in reality the public broadcaster is guilty of – willingly or unwittingly – nourishing the doubt strategy.

In The Australian on May 26th, Chris Kenny argued in “Groupthink takes over at national broadcaster” that the ABC is in the thralls of the “alarmists”. He highlighted the feud between The Australian and ABC’s Media Watch over the way threatening emails to climate scientists at the Australian National University had been reported and portrayed as clear evidence of bias. Click here for Jonathan Holmes latest response, and a background on this exchange. But that aside, this piece will focus on Chris Kenny’s (and broadly the right wing media’s) key accusation that the ABC has a ‘left wing’ bias when it comes to climate change science.

First off, it should be stated that the proposition that promoting climate change science is somehow ‘left wing’ is, in itself, a fallacy. The science isn’t guided by a left or right dichotomy — it is based on the scientific method. The critique of left or right only comes into play when politicians are deciding on how they want to formulate their policy response to the science. For example: Labor’s Emissions Trading Scheme is a market based system that relies on price signals to allocate capital – a right wing approach – and the Coalition’s Direct Action Plan – where government would instead hand out taxpayers money to companies to reduce pollution – is a left wing approach. If the ABC advocated the Direct Action Plan policy every chance it got then the right wing commentariat would be correct in the ‘left wing’ accusations it makes. But the ABC does not do that. Curiously though, the pro-free market and pro-small government newspaper The Australian never writes about the horrors of the left wing Coalition policy, but will write disparagingly of Labor’s pro-market policy despite (one would assume) its natural predilection to embrace it (over the alternative).

But moving on to the main question: Is the ABC really as pro on climate change science as Chris Kenny contends?

I’ve already argued that the science is neither left or right, so let’s see how the ABC presents the climate change science to ABC viewers.

The most recent example that dispels the accusation that the ABC is pro the science is “I can change your mind on climate” that aired on April 26th. This program was a deceptive exercise in giving two unequal positions both equal standing and representation. It was made worse by being fronted by two lay people instead of two climate change scientists. No doubt the producers were unable to find any climate change scientists willing to go along with their intellectual charade.

On Crikey, Clive Hamilton explained the devastating stupidity of it all:

The premise of the film, commissioned by the ABC, and the accompanying panel, suggests that there is a genuine debate about climate science. But as there is in fact no debate in the scientific literature about the main propositions of climate science, the ABC is hoodwinking its viewers.

If there were a real debate among scientists, then the climate deniers would be publishing their counter-evidence in the professional scientific journals. But they are not, because they do not have evidence that will stand up to scrutiny.

So they set out to do something else, to create the impression in the public mind that there is a serious debate among scientists about global warming. To do so they must shift the terrain away from the scientific journals and into the popular media, where they do not have to face the scrutiny of experts....

The ABC will argue that in presenting “both sides” viewers will be able to make up their own minds. For issues such as euthanasia, capital punishment or conflict in the Middle East, that is legitimate. But the subject of this debate is a complex body of science that only those with advanced training in a relevant discipline can properly understand and assess....

“To be fair to the truth.” Once we simply expected that of the national broadcaster. This latest program tells us that the truth no longer carries so much weight at the ABC, not when it comes to climate science.

The ABC giving the green light to this production showed a failure in their programming standards and further sullied advancement of the issue in the mind of the public. The only benefit from the program was in serving the strategy of doubt and perpetuating the false equivalency of there being two justifiable positions. This wasn’t left wing or right wing — it was just bad programming based on specious balance.

Incidentally, Nick Minchin, the representative for the climate denialists, has been on the wrong side of another important issue in the past. He brazenly took the view that second-hand smoke was not harmful and did not require government regulation — despite the overwhelming preponderance of scientific evidence.

Second-hand smoke is now suspected to be a strong factor in Sudden Infant Death Syndrome, which for years has mystified the medical profession and terrified new parents.

The other glaring example of the ABC presenting a program that was anti-science was on 12 July 2007, when it aired the controversial climate change sceptic documentary, “The Great Global Warming Swindle”. Subsequently, the documentary received wide and exhaustive criticism for distorting the contributions of two featured scientists, misrepresenting research, making assertions without evidence, and overreaching in its attacks on scientists and the Intergovernmental Panel on Climate Change (IPCC).

But television hasn’t been the only ABC medium that has helped to further the doubt strategy. A quick browse on The Drum website shows that climate change denialists have had bountiful access to the ABC’s online opinion pages.

Then of course you have the army of IPA representatives that are regularly featured on The Drum in both online and television formats.

They include but are not limited to:

Although IPA refuses to disclose their funding, they have been exposed for receiving monies from industries ranging from mining, energy, tobacco, pesticides, and irrigation. And when you look at the positions the IPA has taken and what industries that fund them — there is a striking coalescence. Therefore, it is fair to question whether they really speak for the merit of the science or rather for their financial backers. Industries like to fund outfits like the IPA because they know an incredulous public wouldn’t believe their self-interested positions if they came out with it publicly themselves.

None of the denialists I have listed have credible climate science backgrounds and most are supported either through institutions, or directly themselves, by industries that are looking to protect their bottom line by limiting action on climate change. Yet, despite these blatant conflicts of interests, they are given a powerful platform on the ABC under the guise of ‘balance’.

The argument peddled by Chris Kenny and his ilk that the ABC kowtows to the ‘left wing groupthink’ is a rather spurious argument that rests on a tired and false stereotype of a left wing leaning public broadcaster. What you can safely accuse the ABC of is falling in line with the groupthink of the wider mainstream media when it uncritically gives denialists a soapbox in the name of ‘balance’.

Rather than adhering to standards of quality and truth, the ABC does a disservice to the science and the public by going along with the rest of the media in gratifying the hucksterism of the denialists.

Note: The term denialist has been used to label all those opposed to the scientific consensus on anthropogenic climate change. Scepticism is an important facet of science that has been perverted and co-opted by denialists who want to masquerade as having a legitimate dissenting scientific view. This piece will not indulge that fraud.]

Footnote: For the full history of the tobacco strategy read Naomi Oreskes and Erik Conway’s meticulously researched book, “The Merchants of Doubt”. It details the key players and institutions that have attempted to discredit science for their own political and commercial ends, and often with the aid of a passive media.