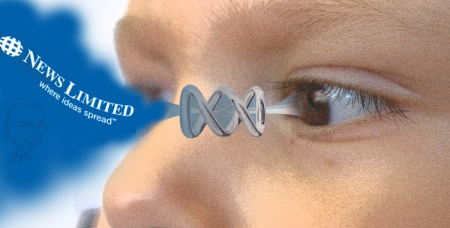 FROM June 2011 to June 2012 there were 313 guest spots taken by news media, social media and ABC staff on the ABC TV program, The Drum. Journalists, reporters, presenters, bloggers, commentators and one sole cartoonist made up the influential cohort. A full list can be found further down.

From a total of 800 guest spots over the year, those in the news media business took 39 per cent. The think tank industry, which I previously analysed, accounted for 11%, and political party aligned guests made up 29%. The disaggregated details of the latter will be posted soon. 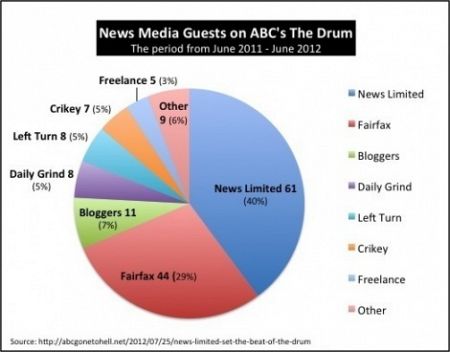 But focusing on news media guests, the clear winner when ABC staff were removed from the data was News Limited. It trumped rival colleagues in traditional news media and social media, taking 40 per cent of the total spots allotted. Their main competitor, Fairfax, trailed a distant second at 29 per cent.

The chart below includes the 160 appearances by ABC staff. 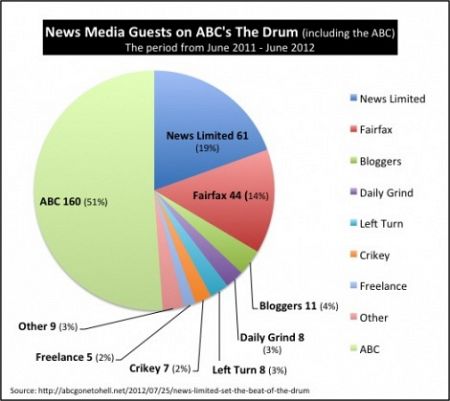 The rationale for excluding the ABC staff from the primary chart was that, unlike the commercial/independent media guests, the ABC has an Editorial Policy that (in theory) prevents it from having an ‘opinion’. This may be a good standard of practice for journalism, but it is not conducive to being a useful guest commentator on a TV program designed to candidly discuss views on politics and hot issues.

If ABC staff adhere to their Editorial Policy as expected, then you can only assume they sit there self-censoring and deliberately omitting information for fear of perceived bias, being careful to downplay everything, and lazily applying false equivalencies to appear neutral and subsequently objective. Their full potential in a format like The Drum is severely limited. And if they don’t have the clever quips like ABC’s Annabel Crabb, then you really are in beige territory.

Host of ABC’s Media Watch, Jonathan Holmes, is dubious of the practice.


“The whole business of putting ABC journalists in a position of expressing a personal position is dangerous. Going on The Drum is taking a risk. Someone like Annabel [Crabb] is bright enough to navigate the shoals. You’ll always be torn between expressing an opinion and saying nothing.”

Holmes says he doesn’t believe ABC Radio National host Fran Kelly, for example, should be appearing on programs such as Insiders.

When ABC’s Stephen Long ventured an opinion (or is it analysis?) on MP Scott Morrison’s “seemingly racist” approach on Asylum Seekers, we soon learned the peril of not shutting up. Incensed, Mr Morrison shot off a formal complaint to the ABC and twodays later received a grovelling apology from The Drum. Read more here.

So, for this reason, ABC guests in my view are not real participants on The Drum. Their role is muted and never fully realised, as most are reporters of news not commentators on news. The program should probably cease using ABC staff and start calling more on the services of those in the news media and social media who are willing and able to provide their opinion — whatever their political slant or worldview may be. But just as long as the ABC doesn’t favour one news organisation over another in the process. Oh, wait …

Below is the list of media guest appearances throughout the year. 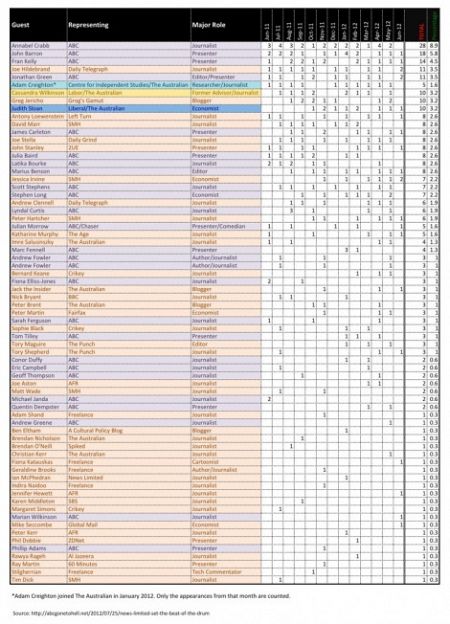 Please note that hosting duties of The Drum by ABC staff are not included in the count. 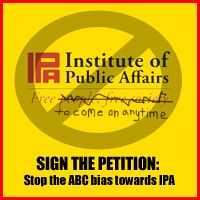