Climate change denial is as easy as ABC

The ABC's approach to reporting on climate change is motivated more by politics than science, says environment editor Sandi Keane — who compares its coverage to that of the BBC. 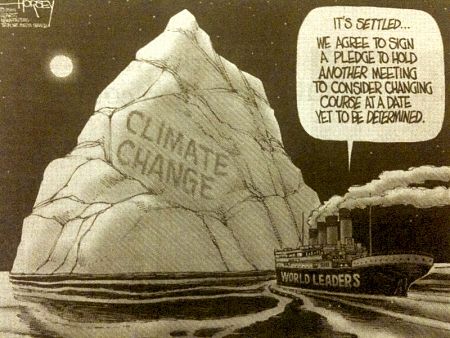 When did the right relinquish its stewardship of the natural world to cast doubt on environmental problems? According to Sharon Beder, the answer lies in environmental regulations. Environmentalism is increasingly seen by neo-liberals as the ‘slippery slope to communism’, threatening free markets with costly regulations and ‘green tape’.

It was the father of the Liberal Party, Sir Robert Menzies, who established the CSIRO. But instead of knowledge and facts being the traditional realm of scientists such as the CSIRO, unqualified sceptics have grabbed the limelight.

In this article, the delivery of these ‘imperatives’ by both public broadcasters in the reporting of climate science is juxtaposed against a third — the political imperative.

If editorial policy is subordinated to political balance, it renders science reporting hostage to the prevailing views of any government or opposition. Forcing audiences to view scientific facts through a political prism could compromise the integrity of the facts.

When the BBC commissioned Professor Steven Jones’ review of impartiality in science coverage, Jones emphasized the need to avoid ‘false balance’ (Jones’ term) and to clarify the difference between ‘fact and opinion’.

Another BBC high-level seminar concluded that

“...the weight of evidence no longer justifies equal space being given to the opponents of the consensus”.

“One of the tests the BBC uses for deciding whether a topic is a ‘controversial subject’ is to look at the distinction between matters grounded in fact and those which are a matter of opinion”.

An illustration given by Abrams is the Berkeley Earth Surface Temperature (BEST) project report. When its first results showed the world was, indeed, warming, no airtime was given to prominent climate sceptics (like Anthony Watts) who disagreed with the findings. The BBC simply reported the news.

The ABC’s new Editorial Policies, published in April 2011, echo those of the BBC’s. Content makers are now required to consider the ‘degree’ to which a matter is ‘contentious when applying an ‘impartiality’ test, to determine ‘balance’ by weighing the ‘body of evidence’ and to “distinguish fact from opinion”.

However, unlike the BBC, the ABC has commissioned no scientific review of its science coverage.

And in a response to a recent complaint about its coverage of AGW, ABC’s Audience and Consumer Affairs argued that ‘AGW was real’ and that ‘balance’ should ‘follow the weight of evidence’. It concluded by saying:

“The ABC’s coverage of this issue has well and truly moved on from the debate as to whether or not AGW is real.”

If the ABC has, indeed, “moved on”, along with its controversial former chairman, Maurice Newman, will ABC audiences see an end to the ‘pairing’ of climate sceptics with scientists?

Newman provoked criticism from the liberal commentariat, and disquietude amongst ABC staff, when he crossed the line on editorial independence — accusing senior staff of being too “intolerant” of climate sceptics.

It also surprised Abrams, who responded:

“If a BBC Chairman attempted to exercise editorial control over the content of a programme by issuing orders that went against instructions from the normal editorial chain of management, the journalist would be entitled – indeed obliged – to ignore those orders.”

For the past sixteen years of Coalition-appointed chairmen, supporters of the science have argued that political motivation was behind the ABC’s ‘false balance’ on climate science.

Unlike Britain, where acceptance of human-induced global warming is bipartisan, Australia’s political divide is like the United States. Both countries are home to powerful fossil fuel and mining lobbies.

Manipulating the mind used to be the weapon of choice of totalitarian regimes, but the last decade has seen an unprecedented rise in fossil-fuel-funded sceptic propaganda in these two ‘beacons of democracy’.

Spearheading the Australian campaign is the right-wing lobby group, the Institute of Public Affairs (IPA). With links to the Liberal party and mining, the IPA is front and centre of the climate sceptic campaign. It has been highly successful in skewing public opinion. The public’s loss of appetite for a carbon price is no accident.

A recent analysis by managing editor David Donovan of Q&A’s panellists shows the IPA appeared eleven times. Its opposite number, The Australia Institute (which like the ABC believes that ‘AGW is real’), has never been invited. And surprisingly, given climate science is a frequent topic on the programme, nor has the Australian Conservation Foundation.

The IPA enjoys a privileged position as favoured commentator across a range of ABC programs. But in spite of evidence that its past income came from mining, it has never once been asked by the ABC to disclose its funding.

This week, the ABC’s Q&A show will host another ‘debate’ on climate science, with former Coalition Senator and Liberal power broker, the well-known AGW-dissenter, Nick Minchin. Regardless of the outcome, the sceptics can already chalked it up as a win thanks to the myth perpetuated by the ABC that AGW is ‘controversial’.

It is no secret that the phoney ‘debate’ about global warming was deliberately manufactured by self-interest groups to delay regulation on emissions.

It is also no secret that conservative political parties have received a boost in funding from the miners since Labor won office in 2007. The recent report from the Australian Electoral Commission calculates a spend of around $8 million by mining on political campaigning in the 2010/2011 year — most of it going to the Liberal and National parties. This comes on top of $22 million spent by them the previous year on political campaigning against the mining tax.

The extent to which the Coalition’s climate action agenda has been hijacked by mining interests is summed up by Crikey’s Bernard Keane:

“The sheer scale of mining company generosity illustrates why Tony Abbott remains committed to repealing the carbon pricing package and the mining tax despite the difficulties he will face in securing Senate support.”

In their comparison of the 2010 tours by UK climate change denier Christopher Monkton and prominent climate scientist, James Hanson, Monash University’s Philip Chubb and Chris Nash expose the links between politics and ABC’s coverage of the two tours.

The authors concluded that the ABC imperative to give equal weight to the two political positions – Labor and the Coalition - would hold sway even despite it clearly being a case of scientific consensus versus populist opinion. The authors drew upon the well-known ‘balance as bias’ argument by the Boykoffs (2005) concluding this amounted to “a prejudicial subversion of the scientific findings".

Monckton over-eggs his CV, to put it mildly, according to Clive Hamilton. Claiming to be a member of the House of Lords, a Nobel Laureate, to have single-handedly won the Falklands war, found cures for multiple sclerosis, influenza, food poisoning, Graves’ disease and HIV, Monckton was given saturation coverage by the ABC. In total, according to Chubb and Nash, he was interviewed or reported on 43 times — which on several occasions included the Leader of the Opposition, Tony Abbott and other senior Coalition members.

Only Jonathan Holmes, presenter of ABC TV’s Media Watch, was critical about the ABC’s coverage. Even so, he wasn’t concerned about the airtime given to Monckton just that

“...some of his most contentious statements have gone almost unchallenged in the Australian media”.

The BBC’s treatment of Monckton, by contrast, was to portray him as a wacky eccentric rather than an authority.  BBC Four’s “Meet the Climate Sceptics” drew praise from Professor Jones that “things are, perhaps, improving” (at the BBC) whilst an angry Monckton pursued an unsuccessful injunction against the BBC in the High Court.

Grantham Research Institute’s Bob Ward was “amazed anyone could take Monckton seriously in Australia” after his credibility in the UK sunk to near-zero following the broadcast.

But the atmosphere appeared to cool between Monckton and the ABC on his return in 2011 three months after the new editorial guidelines were adopted. His arrival this time was mired in controversy after jibes about economist Ross Garnaut being a Nazi forced a rare apology. Three German clubs cancelled. Monckton was on the back foot and became more defiant each day, threatening to sue anyone who criticized him.

A complaint to the ABC duly followed Background Briefing’s dogged pursuit of answers during of his tour. In a revealing statement to the media in Melbourne, Monckton said:

“I have written to the chairman of the ABC who is a shrimp-like wet little individual and I have said to him, right mate, I warned you about this woman [Wendy Carlisle] orally over breakfast”.

Should anyone be surprised that the climate sceptic Chairman of the ABC Board saw fit to have breakfast with Christopher Monckton, or that this meeting was shortly followed by Newman’s highly publicised attack on ABC staff for alleged bias to climate sceptics?

The outcome of Monckton’s complaints to the ABC was delivered this month. The Australian Communications and Media Authority found no breach of the ABC’s standards.

The former Howard Government’s controversial board appointments were part of a long culture war against the alleged left-wing ideology at the ABC. It was the Board which reportedly forced the ABC to show the denialist polemic, the Great Global Warming Swindle.

Broadcasting pseudo-science is not so easy at the BBC.

“What it boils down to is this, the GGWS in the form it was shown on Channel 4 (and, I assume, on the ABC) would not have met the BBC’s editorial standards, for the same reasons it breached the Ofcom Code.”

ABC’s battle-weary psyche may finally find comfort in Labor’s “merit based appointments guidelines”, which, like the BBC, is based on Nolan Rules.  Under the guidelines, ABC candidates would be assessed by a nomination panel “at arm’s length” from government. It would also return a seat on the board to an ABC staff member. The Opposition is yet to agree with the details, although Tony Abbott has welcomed the new, baggage-free, ABC chair Jim Spiegelman; an appointment now requiring endorsement by the Opposition.

It now remains to be seen if a truce in the culture wars delivers real independence on editorial policy.