A fresh breeze: Young Australians and the Republic

The stench of colonialism does not seem to bother young people as much as the rest of us, writes Jacinta Coelho. 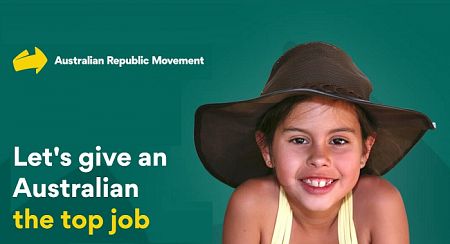 CAN YOU smell that?

Straight after the same sex marriage plebiscite Malcolm Turnbull had hinted at the possibility of a republic via another plebiscite, because, you know, being a leader means you can't possibly make decisions on your own. You need to use an expensive plebiscite instead.

To be fair on Malcolm, though, it is a significant change and one that probably warrants a plebiscite — more so than the recent gay marriage one. It stirred up memories from the previously failed 1999 Referendum, ignited debate about which republican model would be suitable and whether or not Australia has the appetite to even explore the possibility of becoming completely independent from Britain.

From both ends of the spectrum, we've heard the arguments for and against. We have heard from the die-hard monarchists, such as the group Australians For a Constitutional Monarchy (ACM) and heard from prominent monarchists, such as Tony Abbott, who is so supportive of the monarch he reinstated the archaic order of Knights and Dames while he was Prime Minister. He even went so far as to give the Knight of the Order of Australia award to not an Australian....but to Prince Philip.

Then we have the die-hard republicans, Australian Republic Movement (ARM), led by prominent republican supporter Peter FitzSimons. Other well known Australians have also come out in support of a republic, including former Prime Minister Paul Keating, who was critical of Malcolm Turnbull for not going far enough in pushing for a republic. Both sides are set in stone with their ideologies about why the system should or shouldn't change.

What we should find surprising about the whole republican debate isn't the age old arguments for and against it, but rather its lukewarm support amongst young Australians.

In the most recent poll by Research Now done on 10-11 February 2018, only 43.2% of Australians aged 18 to 24 (AKA millennials) supported an Australian republic with an Australian head of state. This cohort showed the lowest level of support for a republic. Followed by the oldest generation aged 65+ where 47.5% supported a republic.

Perhaps the lukewarm response is a sign that a republic is not the biggest issue on their minds, rather than say; housing affordability, job certainty, climate change or their concern about Australia's treatment of refugees, which no doubt in time will leave a stain on Australia.

Another possibility may be that Australian youth don't know enough about the republic issue to have a conclusive opinion on the issue, as they were too young to recall the 1999 Referendum. Some may speculate that the popularity of the young royals has impacted their views, however this was addressed in the Research Now survey and found to have little impact on their support for a republic.

It's a sign that all is well, at least among older generations, who have no doubt been able to use better economic conditions to enable them to purchase property as investment vehicles, as opposed to viewing property as "a roof over their heads". In doing so, they have inadvertently helped push younger generations out of the property market.

It came out recently that young Australians are now overrepresented in homelessness. Even if they are not homeless, they seem to be aware of the fact that they will be financially worse off than their parents. A 2017 survey of Australian milennials by Deloitte showed that only 8% of young Australians believed that they will be financially better off than their parents. Only 4% of them believed they would be happier.

To say that they have bigger problems than a republic is an understatement.

All generations have had their struggles, the Greatest Generation got conscripted into a World War. Millennials are facing their own problems and their concern for a republic is not at the top of the list. It may be viewed more as a "nice to have" rather than a necessity.

It's a disappointing result for die-hard republicans, as we know that effective change tends to be embraced by youth.

A recent example of this was in the United States, after yet another high school shoot out in Florida the younger generations protested for amendments to gun laws. This struck a nerve and Florida sought to impose gun law restrictions, which are currently being contested in court by – you guessed it – the NRA.

WATCH: “Their right to own an assault rifle does not outweigh our right to live. The adults have failed us. This is in our hands now, and if any elected official gets in our way, we will vote them out.”
— Student at U.S. Capitol on #NationalWalkoutDay pic.twitter.com/zgPwewNVR6

In order for young Australians to concern themselves about the republic issue, it needs to have a certain level of urgency and it needs to directly affect them to the point that they will want to do something about it.

Another approach may be to rephrase the republic question to:

When the Queen visited us in 2011, it cost taxpayers $1.74 million, if Australia becomes a republic we will use any taxpayer monarch money to exempt you from stamp duty altogether when buying your first home ....now do you support a republic?

It's more long winded and a less "sexy" question, but you get the point.

Republicans who are members of Parliament could argue for a policy where the money used to support the monarch when they so graciously decide to visit, may be better used to give young Australians first home buyers further stamp duty exemptions beyond the current poor ones. To find ways to address the housing affordability within rental properties and the homelessness issue first.

It's not going to solve all the problems of youth, but housing affordability certainly seems to be a more pressing issue among youth right now than the possibility of a republic.

It may be that only when the more pressing issues are addressed will young Australians truly be on board for a republic.