Royals bill Australians for their own gifts

New reports explain that when our wealthy foreign head of state hands out private gifts to Australian officials, including framed photographs of herself, she then passes on the bill to the Australian Government. Managing editor David Donovan reflects on this absurd situation. 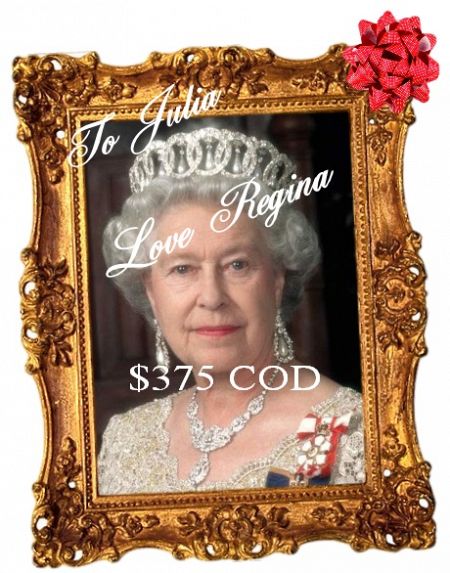 SO, this is how it works, apparently.

Our head of state, an English person who is also the head of state of 15 other countries, every few years condescends to fly out to Australia (or maybe sail here in a taxpayer-funded, personal £70 million luxury yacht) where she stays for a week or less and then sweeps back to one of her many taxpayer-funded stately homes or palaces, which are located spectacularly around England and Scotland.

One can imagine the Prime Minister’s delight in receiving a framed photograph of the Queen and Prince Phillip — along with a card enclosing the bill.

This situation has been going on for decades, according to the Adelaide Advertiser:

The Queen and the Duke of Edinburgh handed out dozens of framed photographs of themselves and other mementos during their tour last October as thanks to their hosts. But the Australian Government paid for the gifts. Prime Minister Julia Gillard and about 40 other Australian officials received the gifts, which cost almost $15,000. In a little-known regal protocol. Prince Charles, during his tour of Australia several years ago, also hit taxpayers for the cost of photographs, trinkets and even copies of a gardening book he co-wrote when he handed them to officials he met.

And $15,000? For 40 fairly cheap sounding gifts, such as framed photographs? That works out to $375 each. Where on earth is the Queen shopping? If we are going to pay for our own tacky presents, can’t it be done on the cheap?

The answer to this is, of course ‘no’, because nothing to do with the royals can be done on the cheap.

Australian taxpayers also foot the bill for royal travel - estimated to cost about $1 million for the Queen's 2011 visit and $350,000 for Prince Charles's 2005 tour and $600,000 for his 1994 trip. Those costs include flights, accommodation, phone calls and expenses such as meals and mini-bar bills.

Charles’ visit in 2005, for example, was for just 3 days. When our other Government officials fly overseas, are their expenses more than $100,000 a day? I don’t think so. I hope not!

All of this highlights the sheer absurdity of having a grand and fabulously rich, foreign, blue-blooded, royal family lording over the Australian people — who are, in contrast, predominately a down-to-earth, egalitarian and democratic people (with one or two notable exceptions).

If our head of state lived in Australia and was Australian, she wouldn’t be handing out gifts to our prime minister for no particular reason — that would be seen as corruption. When the Governor General visits Perth, for example, see does not give the WA Premier Colin Barnett a framed picture of herself. The whole situation as it stands is, let’s face it, an absurd farce.

The good news is that the PM should have no trouble returning the gifts to the place of purchase and getting our money back. After all, she does have all the receipts.