The recent Opera House billboard debate has not only outraged many, but also shed a spotlight on other social problems, writes Jacinta Coelho.

THERE ARE TWO equally cringeworthy things about the debate between shock jock Alan Jones (2GB radio host) and Louise Herron (CEO of the Opera House).

The first is our acceptance of misogyny. Jones being the first example in which his job is to bully, intimidate and harass women in power. His recent interview with Louise Herron is no exception. The petty debate was surrounding Herron's reluctance to use the Opera House sails as a billboard to advertise The Everest horse race.

During the interview, she tried to explain that the Opera House is not a billboard, to which he interrupted her:

Listen to the full interview here

Who is she? Well, only the CEO of the Opera House. Only the person in charge of the decision as to whether Racing NSW could advertise on the Opera House. Something that should be respected regardless of whether Jones agreed or not.

He then suggested that NSW Premier Gladys Berejiklian should sack Herron.

Alan Jones has since come out and made what he believes to be an apology, saying:

“I used some words about The Everest and The Opera House and about Louise... which, in hindsight, I now regret having heard... the impact they have clearly had on some people. I was tough regarding an issue that I and others felt very important.”

What Jones means is, he is not sorry for having berated a woman in power on air, he is only sorry about the impact it had on some people. He admits he was tough regarding the NSW Racing's apparent right to advertise on the Sydney Opera House because it was important to him. But why is this issue so inflammatory? Advertising gambling on, of all things, the Opera House is surely not as important as other issues like human rights. So the reason why Jones felt so strongly about it doesn’t add up. Or at least the level of outrage expressed by him surely doesn’t match the issue at hand.

When Julia Gillard's father died, he suggested that he had “died of shame” and then later apologised (like he did with Herron). Jones will keep bullying and harassing women in power because there is no consequence to his behaviour. Jones keeps his job.

Conservatives, neoliberalism and the projection of greed
~ @davrosz https://t.co/TyeoSgCl2M

Kyle Sandilands kept his job, after asking Erin Molan (Footy Show presenter) whether she had breast surgery and suggested that no-one is listening to her segment.

Australia tolerates misogyny as long as these men are still in jobs. It is embedded in our culture.

The second cultural cringe is our appetite for gambling, especially in NSW.

Gambling is so embedded within our culture that it is seen as the norm to have a total of 95,000 pokie machines in NSW alone. To put this into perspective, only Nevada beats NSW in the level of poker machines. Yes, as in NSW, is second to Las Vegas.

Fairfield in NSW has the highest level of pokie machines and this is no coincidence. Fairfield has a low socioeconomic status, which falls prey to gambling addiction.

0.5 per cent to1 per cent (or around 160,000) of the total Australian population have problems with gambling and, while most industries are entitled to advertise – though not always on the Opera House – gambling isn’t one of those specially protected industries or at least it shouldn’t be entitled to a spot on the iconic Opera House.

Which, let's be honest, is not a billboard.

Bravo the thousands of protesters who peacefully made their voices heard.
And shame on those who made it happen: @Racing_NSW @GladysB @AlanJones The whole thing was a commercial,
political and media disaster for you, because the people rose! 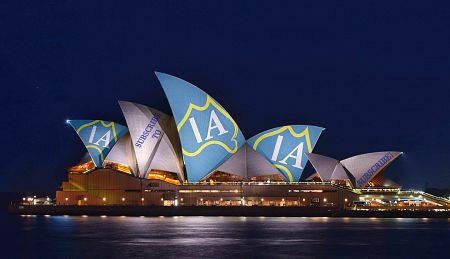 Come on, guys, this wasn't cheap!