Three royal cousins and the road to World War I

Barry Everingham reviews Miranda Carter's new book, Three Royal Cousins and the Road to World War 1: “...that these three absurd men could ever have held the fate of Europe in their hands is a fact as hilarious as it is terrifying".

THE CATCH CRY of the Monarchists is that if it aint broken don’t fix it!

The problem is it is broken, it’s redundant, and it’s offensive. The major members of the British royal family are as incompetent as their recent ancestors and anyone who doubts this claim should read Miranda Carter’s new book.

The royals are not to blame for their genes; the fault lies with the system which keeps at the apex. 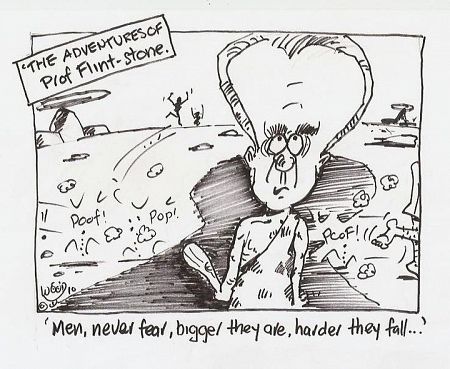 To call the British royal family an “Australian royal family”, as David Flint constantly claims they are, is just rubbish.

This curious family is headed by Elizabeth — the 41st monarch since William the Conqueror; she has a devotion to middle class ideals which she seems to have inherited from her grandmother of three removes — Queen Victoria.

Unfortunately Victoria’s royal German roots have been passed down – and inherited by – the monarch’s children whose father, the Duke of Edinburgh also shares the same relationship as his wife to the long dead queen.

So who are the members of this “Australian” royal family so revered by Monarchists?

There’s the queen and her husband, their four children of whom are two divorced from their original spouses and two have remarried while the third still lives with his wife while both play the field and the youngest son who remains married.

The next in line to the throne of Australia is the Prince of Wales who married his long time mistress, who will be the next Queen of Australia

(Now might be the time for snipers to leave alone Julia Gillard’s living arrangements.)


Then come the grandchildren – eight in all – followed by really minor members most of whom most Australians have never heard of — the Dukes of Kent and Gloucester and their children.

Having disposed of that it’s time to get into Miranda Carter’s excellent research into the sheer incompetency, and the ridiculous upbringing, of King George V, Emperor Wilhelm of Prussia and Tsar Nicholas of Russia — the men who were responsible for World War I, all cousins and two of whom were Victoria’s grandsons and the third her grandson-in-law.

And this is where Carter’s book takes over.

George V, Elizabeth’s grandfather married a penniless German princess, May of Teck, who just happened to be granddaughter of the insane George III, and therefore her fiancée’s cousin of sorts.

(No animals breeders would allow such coupling – but it runs deep though “our “royal family and, curiously, Australian blood lines are missing.)

George’s father Edward VII, Victoria’s son, was a wastrel womanizer, gambler and layabout; married to one of the world’s most beautiful princesses then, Alexandra of Denmark, whose sister Marie was, incidentally, Tsar Nicholas’s mother!

George and May couldn’t have been worse parents — one of their sons, John, was autistic (backwards, in those days) and was shunted out of the way and died in his early teens. Their eldest son, David became King Edward VIII and lasted less than a year before the establishment forced his Abdication because of his love for an American divorcee.

In Moscow, Tsar Nicholas and his German wife Alexandra – a granddaughter of Queen Victoria’s - were so far removed from reality it was with no surprise that they were thrown off their thrones. What did surprise the world at the time was that Nicholas’s cousin, George V, reneged on a promise he gave the Russian royals that they would be given exile in Britain. So much for happy families — the Tsar, his wife and five children were brutally murdered as a result of “loving cousin’s George’s” back down.

In Berlin, cousin Willie’s absolute obsession with military uniforms and helmets - and by  implication with some of the young men who wore them – took his eye off the main chance, and against all the warnings of his professional advisers, World  War I had its genesis.

As Zadie Smith said in a review of the book “...that these three absurd men could ever have held the fate of Europe in their hands is a fact as hilarious as it is terrifying".

Equally as hilariously terrifying is that Queen Victoria’s non-Australian, non-resident, unelected descendents have been the neutered and powerless heads of state of this country for years. If ever the time has come for a referendum it is now.

Miranda Carter is a London based author and Orwell Prize winner for political writing as well picking up a Royal Society of Literature W. H Heinemann Award.