The danger of selecting a head of state based on bloodline

The March publication of this story about the dubious male parentage of Harry Windsor and what it means to the line of succession to the "Australian throne" stirred up debate and controversy  — as well as generating huge numbers of hits, especially in the UK.

Roy McKeen says that unless we DNA test everyone in line for the British Crown, how can we be sure they are legally eligible to be our head of state?

When Princes William and Harry stand beside one another, the groom and the best man, at William’s wedding in April they will be the second and third in line to the British (and hence Australian) throne. William, born to be king and Harry next in line. But is Harry really eligible to become Australia's head of state?

Harry will celebrate his 27th birthday in September and for the past 26 years there has been controversy as to who his true biological father is. This controversy started on the day that Harry was born—September 15, 1984.

Charles had been made aware that Diana had taken James Hewitt as a lover months before she told him that she was pregnant for the second time. But Diana had no idea that Charles knew that she and Hewitt had become lovers. Throughout the pregnancy Charles never let on that he knew she had taken a lover. Nor did he let her know that he knew that she continued to see Hewitt during her pregnancy. For some eight months Charles had hoped that Diana would enjoy a short fling with Hewitt and would return to him after their child was born.

It was with some trepidation that Charles took the elevator to the Lindo wing that September day and went to see the newborn baby, then just a few hours old. Charles looked at the tiny baby in the cot next to Diana’s bed and his worst fears were realized. “Oh, it’s a boy,” he said, “and he’s even got rusty hair”.

With these dismissive remarks he left to play polo. Prince Charles had hoped and prayed that the baby would not look anything like James Hewitt because he knew there was a slight possibility that the baby could be his. In his heart, however, Charles felt fairly certain that the baby Diana was carrying was not his because, for all intents and purposes, their sexual relationship had never fully recovered after the birth of William in June 1982.
(pp.84-86)

If it were not for the fact that Prince Harry is third in line to the throne his biological paternity would be merely a bit of tittle-tattle, a family scandal. But Harry was born into a family in which the bloodline matters. Ever since his birth comments have been made that Prince Harry shows a very strong resemblance to James Hewitt. Harry has the same lanky frame, sandy hair, freckles and the distinctive Hewitt jaw line.

The New York Post quoted a source as saying:

“Harry looks awfully like James Hewitt. It’s not just the red hair – Diana’s family contain a few redheads so that should explain that. But put a picture of Hewitt at the same age next to one of Harry and you’ll see what everyone is talking about.” 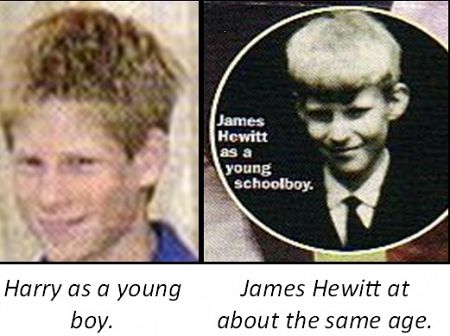 But Prince Harry is third in line to the throne and if fate were to call him to that throne disputes about his paternity would have serious constitutional ramifications for the United Kingdom and those other countries – like Australia, New Zealand and Canada – where the British monarch is head of state.

The laws of succession to the throne (Act of Settlement 1701) state that the monarch must bear the blood of the late Princess Sophia, Electress of Hanover, Germany.

If that situation ever arose and DNA tests showed that Harry does not carry the German blood required by British law he would be declared ineligible to become king.

The irony of this is that if James Hewitt was deemed to be his biological father Harry would have purely British blood. But the laws of succession to the throne would bar him from becoming king because he does not have the blood of Princess Sophia, Electress of Hanover – a German princess – flowing through his veins—this is a key requirement under the 1701 Act of Settlement, which governs the Law of Succession in British and all subsidiary realms, including Australia.

Some years ago, the British republican movement, Republic, called for the DNA testing of all members of the British royal family. They asked, quite reasonably, why should the population of the United Kingdom be denied the positive proof of the legitimacy of their ruling family, who sit constitutionally at the top of their society's pyramidic class structure and are the recipients of many millions of pounds of public money annually. Republic stated that UK citizens have every right to know if the Windsor family are who they claim to be.

You would have thought that the onus should be upon the British government, on behalf of British taxpayers, to satisfy themselves that all members of the Windsor family – particularly those in immediate line for the throne – are legitimate to clear up any troubling constitutional issues that may arise in the future. If bloodline is the major factor determining person's eligibility to rule Britain, this factor should be tested before any potential monarch ascends the throne

Prince Harry is third in line of succession and at the moment it is unlikely that he will be called upon to accede the throne. But the Queen is 84, Prince Charles in in his 60s and Prince William is a helicopter pilot—an occupation in which it is not uncommon for helicopters to crash. 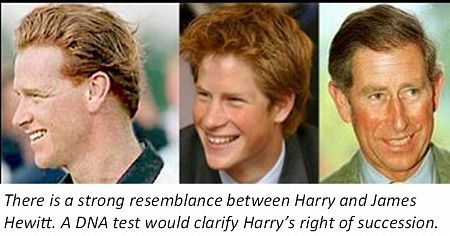 Under the circumstances, there is a case to be made for the Australian government to put pressure on the British government to have Prince Harry DNA tested in order to clarify if he does have the required German blood. Section 2 of the 1901 Australian Constitution states that:

"...the provisions of this Act referring to the Queen [i.e. Victoria] shall extend to Her Majesty’s heirs and successors in the sovereignty of the United Kingdom."

As discriminatory and potentially embarrasing as enforcing this requirement may be, for as long as the monarch of the United Kingdom is also the monarch of Australia, we have a right to know if a potential monarch has the correct bloodline.

On the other hand, if we believe that investigating a person's true parentage is objectionable, discriminatory or abhorrent, then we mustn't agree – as a society – that bloodline is an appropriate way to choose a head of state. If this is the case – as it surely is – then the system has been proven to be flawed and unfair.

We should act now to ensure our head of state is no longer selected in this objectionable way—we should become a Republic as soon as possible.