Setting out a clear pecking order within the royal family, The Queen says Princess Kate must now curtsey to “blood princesses”. In a comprehensive IA wrap, senior correspondent Barry Everingham and long-time contributor Roy McKeen argue its time to end our vassalage to this foreign relic of the early eugenics movement. 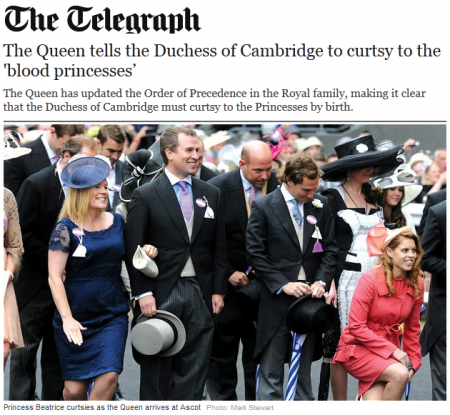 As an update to Curtseygate last year – where Julia Gillard caused consternation amongst Palace courtiers, uproar amongst conservative commentators, and convulsive contortions in David Flint’s knickers – we now hear that the Queen has provided an update as to who exactly must curtsey to whom in Australia’s ruling family.[Read honorary lifetime chair of RARA Sir Flavius Dint’s reflect on the non-curtseying calumny committed by Julia Gillard last October.]

Yes, it’s all very confusing and vexed. From London’s conservative broadsheet, The Telegraph:


The Duchess of Cambridge may be the future queen, but she has discovered that there are several women in the Royal family to whom she must show reverence. Mandrake hears that the Queen has updated the Order of Precedence in the Royal Household to take into account the Duke of Cambridge’s wife.

The new rules of Court make it clear that the former Kate Middleton, when she is not accompanied by Prince William, must curtsy to the “blood princesses”, the Princess Royal, Princess Alexandra, and the daughters of the Duke of York, Princesses Beatrice and Eugenie.

When William is with her, Kate does not need to bend the knee to either of them, but she must curtsy to the Prince of Wales, the Duchess of Cornwall, the Queen and the Duke of Edinburgh.

Despite being married to the Queen’s son, the Countess of Wessex will, however, have to curtsy to Kate, even when William is not present.

With their worldview firmly affixed in the late Cretaceous period, our ruling family appear doggedly intent upon perpetuating any and all traditions — irrespective of their absurdity or demeaning nature.

Later in The Telegraph piece:


Although the etiquette may seem arcane, it is taken very seriously by the Royal family, whose members bow and curtsy to each other in public and in private. A vivid illustration came after the Trooping the Colour ceremony last weekend, when Kate could be seen curtsying to Prince Philip on the balcony of Buckingham Palace.

The Order of Precedence affects other aspects of royal protocol, such as who arrives first at an event. For example, Camilla was forced to wait in the drizzle outside the Guards Chapel, Windsor, for the arrival of Princess Anne at a memorial service in 2006, because Charles had not accompanied her. A Buckingham Palace spokesman declines to comment.

Nodding approvingly at the latest curtsey decree from his flat in Sydney will, no doubt, be fanatical foreign tradition lover and royalist extraordinaire, David Flint. Our senior correspondent Barry Everingham has written an open letter to Flint on this notable moment in Australia’s long history of obsequiousness to our English-German blueblood “betters”:

I draw your attention to an Oxford Dictionary description of the word curtsy (or curtsey).

Please read it, Professor, and explain how in the 21st Century a woman could actually demean herself


“…by making a salutation by bending the knees or lowering her body.”

Now, I know you live in another century – and maybe even on another planet – but for God’s sake man, will you please stop making the ridiculous statement that the British royal family is also Australia’s royal family.

It is not — it never has been.

We are lumbered by a Constitution which gives us a non-resident unelected foreigner as our head of state – yes, David, Head of State – thereby preventing all Australians from hold the nation’s highest office.

Now before you shake your head, purse your lips and tut a roomful of tuts — surely you, who would have been glued to your TV for a whole weekend watching the Head of State’s 60th anniversary and you would have heard as well  the commentators and speech makers refer to Elizabeth II’s multi crowns and her status in many of the former colonies, including Australia, where she is “Head of State”.

Now, for a long time you have been bleating this description is wrong, that the Governor-General holds that job (if only, what a magnificent First Citizen she would make).

Then so show just how out of touch you are you refer to the Queen as our Monarch but not our Head of State.

All the above should be regarded as the preamble to what I am about to draw to your blinkered attention.

So let’s look at the incredible pecking order, which applies to the Queen of Australia’s female family members — none of whom, David, are – like her majestic self – Australians.

So, Katherine Middleton – who, it is generally believed, will save that absurd family from itself – will need to drop a bob to the “blood princesses” Anne, Beatrice, Eugenie, Alexandra and some of the cousins — including the obnoxious Princess Michael of Kent.

But there are some riders; Kate needn’t demean herself if William is with her, but whether he’s there or not, she must when she comes across Elizabeth II , Philip, Charles or Camilla.

And as far as Kate’s status is concerned Sophie Rhys Jones, Edward’s wife, for some reason has to drop a knee to her.

Now, David, please let our readers have your real thoughts are on all this nonsense — and please tell me you regard it for what it is.

And, on a related subject…

Why, oh why, was the British national anthem played when Julia Gillard lit the bonfire to mark the Queen of Australia’s 60th year?

Julia correctly stayed mute but our Tony, devilish monarchist that he is, sang heartily.

Which of course got old Sir David Smith revved up, blabbering all his usual nonsense about God Save the Queen being a royal anthem.

Why don’t these people just get a life?

If there is one aspect of the House of Saxe-Coburg-Gotha-Schleswig-Holstein-Sonderburg-Glucksburg alias Windsor-Battenberg alias Mountbatten which makes me as red in the face as Christopher Pyne during Question Time in the House of Representatives, it is when I see good ordinary, decent people demean themselves by curtsying to members of the first aforementioned House.

Of course, the English are famous for their bowing and scraping as they crouch, stoop or kneel in the presence of anyone in the least way connected to royalty — and there are a few Australians who make a good fist of it as well. Janette Howard comes to mind.

So it was, that once again my blood pressure soared and my complexion took upon a Pyne-like hue when I read the news that the Queen has updated the Order of Precedence in the Royal Household to make it clear that the Duchess of Cambridge, the former Kate Middleton, must curtsy to the “blood princesses” — Princess Anne, Princess Alexandra, Princess Beatrice and Princess Eugenie. That is, except when she is accompanied by Prince William.

The interesting fact about the aforementioned princesses is that they all have German blood in their veins. They carry the blood of the late Princess Sophia, Electress and Duchess Dowager of Hanover, Germany. It is a statutory requirement that the monarch of the United Kingdom – as well as not being a Catholic – must have that blood. By contrast, the commoner Kate Middleton, who married Prince William, is a pure-bred English girl.

And there’s the rub.  An English girl is commanded to bow and scrape and grovel and show deference to someone purely because they have foreign blood.  After the recent Trooping the Colour, Kate was seen curtseying to Prince Philip on the balcony of Buckingham Palace. Philip, of course, has close connections to Hitler’s Nazi regime. He had two sisters who were married to officers in the Fuhrer’s armed forces and has a nephew whose name is Adolf.

As Australians, we pride ourselves on our egalitarian attitude where Jack is as good as his master and people get on in life because of hard work, study and perseverance — rather than just being born in the right bed.

It has been said that the Queen has never put a foot wrong. As she approaches her dotage it would appear that this is one instance where she has put her foot in it.