A STRICKEN BOAT with 37 children and 32 women on it off Christmas Island has climaxed Immigration Minister Scott Morrison’s worst week and may see him soon, or eventually, in gaol awaiting trial in The Hague.

His policy of kidnap, piracy, bribery, cover-up and facilitating the torture and death of children has disgusted some of his own back bench and his foam-flecked madness in Question Time is worrying even Sky News’s beaming thickos and his fellow worshippers in Shirelive.

Now, after saying children with a 49 percent chance of crucifixion or beheading in Iraq will be sent back there, he is facing the ultimate horror — a boat that can’t be sent back because it is not safe to do so.

It is a boat, moreover, that Sovereign Borders did not notice was on its way for three weeks.

How many other boats did they fail to notice in the last, say, three months — the month they were looking in the wrong ocean for an object big as a football field, MH370? It is probable people are getting through all the time – bribed pearling luggers, ferries that drop in West Irian determined refugees who then walk, or take a taxi, to Thursday Island and enter Australia in car boots or under tarmacs on trucks, that way.

S&M’s Big Lie has been blown. There are many ‘successful arrivals’ — successful because he hasn’t noticed any.

He has meanwhile bound himself hand and foot with his rabid fascistic public utterances.

He cannot take these refugees back to India: he does not have the vessels to do so. He cannot lock up 39 children in Manus or Nauru because the UN will come crashing down on him. He cannot fly them back to India because, in a region keen on bride-burning and raping and hanging young women from trees, the children will be in danger there.

And he will be shown worldwide to be a monster.

He has already protected from imprisonment  the murderer of a young architect and 10 or 20 thugs who cut the throat of one young man and shot and headbashed 60 others. He has already caused three young men to set themselves on fire. He has already forbidden one of the dead young men’s brother to come to his funeral in Geelong — because he might be interviewed on television and blame him for begetting that pointless death.

He has already made frantic thousands on TPVs. He has already threatened with torture and death those he falsely claims are here ‘illegally’. He has already broadcast unsettling videos whose purpose is to terrorise future immigrants with a good cause to seek refuge here.

He has already disgusted Barack Obama, who grew up in Indonesia, and would, under these new strictures, even now, if he came here in a boat, be urged back there in a ‘lifeboat’ at gunpoint.

We may soon see the end of this immigration minister.

He may be given Defence. He may be arraigned at The Hague for what looks to me like a kind of terrorism, scaring the shit out of innocent people in their tens of thousands, by promising to gaol, torment and madden them, or pitchfork them into a war zone aflame with murderous, medieval fanatics. He may be taken away in a straitjacket. But he is not long for the position he is in.

And I wish him ill fortune, unsympathetic nurses, bad hospital food, expulsion from his party and prayers for his soul. 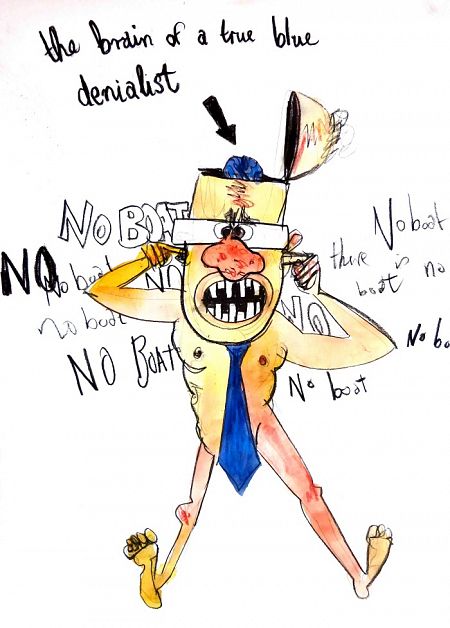