New plans for a bunyip aristocracy

IT COULD BE the weather or it might be that Christmas is upon us, but whatever it is, Professor Flint has this time gone off the deep end.

He wants a bunyip aristocracy created in this country and is calling  for Harry Windsor to be created Duke of Sydney.

And there’s more. He’s calling for the lads to be created earls of some of the Commonwealth countries.

Now, when this ridiculous idea was mooted in the 1800’s  it was rejected out of hand…but here we  are in 2010, in egalitarian Australia and Flint is on a time machine back to the past. 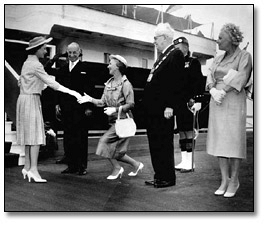 If his epistles ever get to Buckingham Palace, the cringing would be would incredible – the senior royals are, if nothing else, practical . The Queen for instance, has almost told people that if they feel like groveling (curtseying) in front of her, so be it, but they needn’t think they have to.

It’s an established fact that the snobbishness of the British goes back to the question of titles — they divide the classes, they are outmoded, they are offensive and they are plain foolish.

Flint would do well to spend some time with the minor royals and the aristocrats and he would learn that they, in the main, use their  titles for theatre seats or tables at restaurants; there is no way they ever introduce themselves by their titles.

Titles here are quite correctly a thing of the past — the right wing troglodyte Prime Minister of New Zealand brought them back; something own troglodyte PM John Howard wouldn’t consider in a fit.

Without  trying to be patronizing to Australians for Constitutional Monarchy, please put the old pet out to pasture — while he (and Tom Flynn) speak for ACM your organization has become a laughing stock.