YESTERDAY, THE Australian Republican Movement announced that Australia's premiers and chief ministers have made public declarations supporting an Australian Head of State. In a signed declaration, they have affirmed that:

'We, the undersigned Premiers and Chief Ministers of Australia, believe that Australia should have an Australian as our Head of State.'

Hard to argue with that, right!

Thankfully, there will be no Imperial knighthoods awarded this Australia Day.

The reaction from Australians on all sides of politics showed that Imperial honours are divisive and out of touch with a modern, multicultural, egalitarian Australia. Our identity is Australian, not colonial anymore.

A lot has happened since then.

After the "republican declaration" yesterday, if there were any doubt, it is now clear that there is political consensus on the question of an Australian republic. 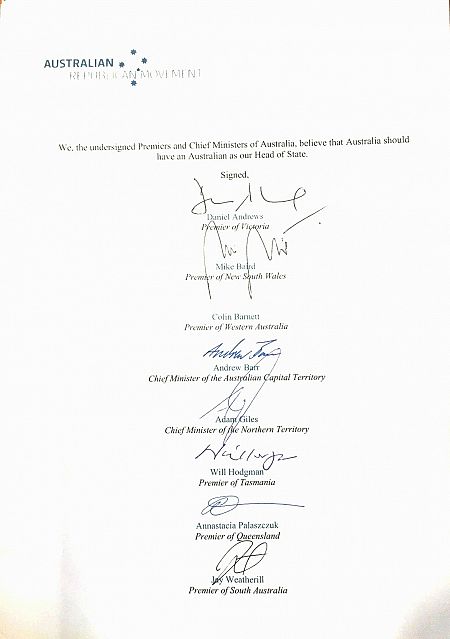 "the republic issue cannot belong to a politician; it's got to be a genuine popular movement."

The Australian Republican Movement has accepted the challenge set by the PM to extend this consensus to the broader community and build a genuine popular movement with the momentum to force the issue to the top of the national agenda.

Indeed, the Australian Republican Movement is calling upon all Australians to join their state and territory leaders in making a declaration in support of the not-so-radical proposition that Australia's highest office should be reserved for an Australian!

"All of Australia's political leaders now support an Australian head of state, including Bill Shorten and Malcolm Turnbull. Never before have the stars of the Southern Cross been so aligned, in pointing to the dawn of a new republican age for Australia".

So this Australia Day, before you tuck into your lamb chops (or vegetarian sausages), please take a moment to jump onto change.org/AusRepublic and add your name to the petition along with your state and territory leaders to declare support for an Australian head of state.

Better still, once you've signed, mention it around the BBQ and see if you can't convince another five of your friends and family to do the same.

It’s time to turn up the heat.

Australian Republic Movement gets a boost as premiers call for Australian head of state https://t.co/aNmzBjnie9 pic.twitter.com/AEKw9mah6x

For a free and fair Australia. Subscribe to IA for just $5.