Climate change denial with the Galileo Movement - all the usual suspects

We’re indebted to our cousins across at Crikey for reporting that a Sydney based PR outfit has been hired by climate deniers to get their grubby message across to the public.

A measure of the type of outfit Jackson Wells is can be gauged by their list of clients, which includes British American Tobacco, the Church of Scientology and The Exclusive Brethren.

A sure fire guess is that the Holocaust deniers will also soon jump on board.

The outfit’s brief, it seems, is to promote the Galileo Movement — which has been set up by a pair of Noosa based deniers who were in awe of the phoney Lord Monckton and Australia’s richest woman, Gina Rinehart. 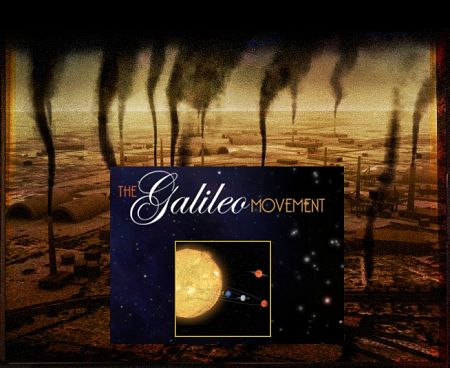 The Movement’s panel of advisors are: Andrew Bolt, Ian Plimer, Bob Carter and David Flint — his great and good mate Alan Jones is the Movement’s “patron”.

Flint needs to be fussier about the company he keeps. As the “face” of Australians for Constitutional Monarchy, he is hardly ever out of the spotlight — although his rants are becoming more, shall we say, “unstable”, as the days go on — and I am receiving many more complaints about him from ACM’s supporters, who pay membership fees but are denied a voice or a vote in the running of the ACM.

Flint often claims ACM has no position on anything political – which, of course, is another of his fantasies. He hangs around with politicians of the extreme right and unashamedly and incessantly promotes right-wing media personalities.

Now, apart from coming out as climate change denier – will his next claim be that the Holocaust was a figment of someone’s imagination? – he has turned his attention to the scrapping of the expensive white elephant the former royal yacht Britannia which the 90 year old Prince Philip said should never have been scrapped.

Philip, of course, used it as a personal floating play room for years, as did the late Queen Mother and Princess Margaret.

Years ago, a Conservative government was prepared to outlay sixty million pounds on replacing it but Labour scrapped the plan.

Philip rabbited on about taking out the ship’s turbines and replacing them, claiming the ship would have lasted another 50 years.

Talking about rabbiting on, Flint went into melt down claiming the ship was “an enormous source of prestige and influence” for realms which share the Queen as sovereign or monarch”!

What planet is Flint really on?

He seriously suggests that Britannia could have been used by Australia (and other Commonwealth countries) as a trade vehicle; we could have, says Flint, subsidised its running costs and with a member of the royal family present to “lend a Commonwealth aura to the occasion.”


Here’s his next claim, which really shows loyalty to his adopted country.

“The fact is there are few politicians – even Antipodean – who can compete with a prince or princess.”

Well, for starters, I can name many (including Indonesian politicians) who would compete with the likes of the Duke of York, Prince Edward and Princess Michael of Kent.

Why on earth would any member of the royal family start promoting Australia after having ignored us for so many years?

It is a shame Britannia was scrapped – but to suggest we could have subsidised its running as the price for getting a foreign royal to promote us – which was never going to happen, beggars belief.

I was on the royal yacht on two separate occasions (both royal tours promoting British goods) and it was a great ship — its interior resembled a floating English country house, even down to the warm gin.

It’s resemblance to anything Australian was absent.

It could never, and should never, have represented Australia in any way shape or form — Flint should get his feet back on the ground.
REPUBLIC ENVIRONMENT Alan Jones Andrew Bolt Barry Everingham Bob Carter British American Tobacco Crikey Galileo Movement global warming holocaust deniers Ian Plimer
Recent articles by admin