IT APPEARS Australia’s history of persecuting “do-gooders” – people who actually try to do the right thing by others, or speak out for the underdog – is almost as long as settlement itself.

No stranger to the anger caused by exposing uncomfortable truths himself, eminent Australian Historian Professor Henry Reynolds is releasing, this month, a book dedicated to the largely forgotten humanitarians who took on the authorities over the mass killing and generally poor treatment of Aboriginal Australians.

Professor Reynolds said in an interview from his home in Richmond, Tasmania:

It’s a book about the White humanitarians who criticised – from the very earliest years – the way in which Australian settlement was unfolding.

They were often outraged, and wrote letters, and made speeches, and gave sermons, and wrote to government about their concerns about the way Australian settlement was taking place and almost every era, from certainly as early as the 1820s, had these people who I think are very important.

They are like the people who fought slavery in England and also in the United States – but they, of course, have been celebrated in the histories of those places … but almost no-one knew anything about these Australian people, and I did a lot of research and retrieved the careers of many of these people.

The book, just one of the more than ten volumes written by Professor Reynolds, is called This Whispering in our Hearts and will be in bookshops around the country from mid-August.

It’s an updated and revised edition of a tome, by the same name, published 20 years ago.

I thought 20 years is a long time ago and in that time there is a whole new audience, so we brought the book up to date.

I think these people should have much greater recognition than they have.

As a result of not being known and recognised, there’s a lack of knowledge about this tradition and even the humanitarians themselves didn’t necessarily know there had been people in the past who were doing the same as they were, because there was very little historical memory about this tradition.

I think people find it – particularly White fellas find it – an inspiriting story to realise there were people who really put their careers and sometimes their lives on the line fighting for justice.

The book is being published as researchers at the University of Newcastle continue building a new massacre map project.

With more than 200 massacre sites now identified, they say they expect to find at least 500 before the project ends.

One of the most infamous "do-gooder" cases was that of Methodist missionary John Gribble, who, after spending time in the South-East, travelled to Western Australia’s northernmost regions.

Gribble was well known for his strong character and famously "accosted" bushranger Ned Kelly after the latter had robbed the entire town of Jerilderie so as to demand the return of his watch.

He became a hated figure who was effectively driven from the colony.

In August 1886, The West Australian carried an editorial:

'We must apologise to our readers for giving them so much Gribbliana of late, but the papers of the eastern colonies have been full of articles upon the assertions of one whom without exaggeration, we might designate as a lying, canting humbug.'

"... made a terrible nuisance of himself and got driven out of the colony in Western Australia, and then, in a strange way, his son took up the cause and he too – in the 1920s – he was the one who exposed the so called Forest River Massacre."

That Kimberley Massacre, in 1926, resulted in 20 Aboriginal deaths. 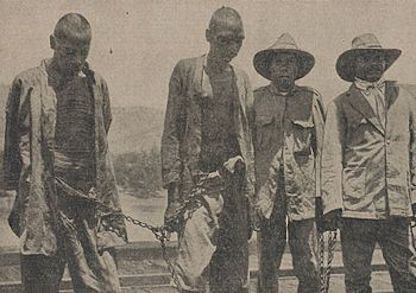 An Indigenous man named Lumbia (in chains on left) after his arrest for the murder of Fred Hay at Nulla Nulla Station in 1926, which is believed to have prompted the Forest River Massacre (Source: Taylor and Francis Online via Wikipedia)

Once again these people became extremely unpopular and hated because they questioned the whole ethics, the whole morality of Australian settlement, and if you did that you often became immensely unpopular and it was never a good career move.

In the case of the Gribbles they were attacked and this is generally the case, so it is a fascinating continuing story that you can trace back 200 years.

Although The Whispering in our Hearts covers the activities of white “do-gooders” from early settlement, the story doesn’t really need to extend past the 1970s according to Henry Reynolds.

In a way the leading role of these people was surpassed when Aboriginal organisations began to proliferate.

Thanks to growing Indigenous political self-representation, the crucial need for white advocates faded away.

Jeff Waters is a former ABC national and international journalist, and author.