Last week it was reported that the Australian Government will fund the production of a A$4.1 million telemovie to be screened in “refugee hot spots”, including Syria, Afghanistan and Iran. The film will include storylines about asylum seekers drowning at sea and feature the Australian Navy. It’s a uniquely Australian contribution to the global cultural politics of seeking asylum — and it’s unlikely to be successful, writes University of Western Sydney Professor James Arvanitakis (via The Conversation). 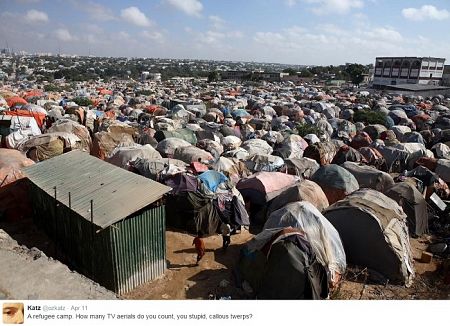 AS AN undergraduate, one of the most influential books I read was Sven Lindqvist’s Exterminate All Brutes (1992), a dark tribute to Joseph Conrad’s Heart of Darkness. Using narrative non-fiction, the book tells of the brutality of Europe’s dark history in the colonial era in Africa and the origins of genocide.

The part of the book that stays with me relates to the outrage that the populace back in Europe expressed when the true extent of this brutality broke into the popular press. Lindqvist speculates, however, that the population back home always knew what was going on, but it was ignored until it could be disregarded no longer.

After demanding punishment for the rogue elements of the colonial army seen to be perpetrating the genocide, the population settles down and quietly accepts that exploitation and brutality is the price others pay for their privileged lifestyle.

But the Abbott Government, which has had little success except for its claim that it has “stopped the boats”, sees the deterrent associated with this mistreatment as a price it is willing to pay. 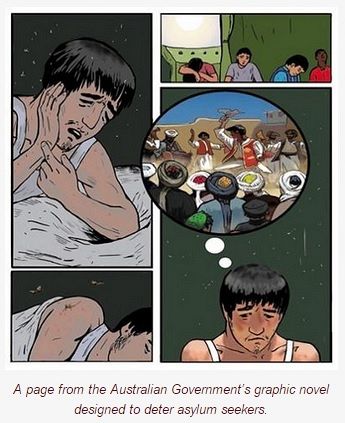 With little political capital left, this is the one issue it will continue to push, while reminding us that under the Rudd/Gillard Governments all the good work done by Howard Government was undone.

Saying this, few people would have anticipated that one of the strategies it would employ would be a telemovie that fictionalises the experiences of asylum seekers and cautions against travelling to Australia by sea.

It’s not the first time the government has used cultural tools to smooth immigration policy. In 2014, it published an 18-page graphic novel aimed at discouraging Afghan asylum seekers from travelling to Australia by boat (see image right).

The film will be produced by the Sydney production company, Put It Out There Pictures. The filmmaker, Trudi-Ann Tierney, has described herself as a “propaganda merchant”. She has also described her previous work as “psychological operations” that failed to acknowledge their funders and were made to appear as if they were created by a local source.

While there are many ways we can analyse this turn of events, let us limit ourselves to three.

The first is from the perspective of arts funding. As I wrote recently on The Conversation, George Brandis as the Minister of the Arts has continued the tradition of funding the 28 large arts organisations at the expense of smaller organisations that tell uniquely Australian stories.

Cuts have been made to Government funding of the Australian screen industry — but A$4.1 million can be found to fund a propaganda piece for a for-profit organisation.

Let’s hope that in his next interview as the Minister of the Arts, Senator Brandis, a supporter of libertarian politics, can confirm whether or not it is the role of the government to fund propaganda pieces like this.

Second, while the boats may have stopped arriving on our shores, they have not stopped. They have been displaced. The wars in the Middle East have seen millions of refugees seeking asylum and a reprieve from war. In fact, earlier this year, the United Nations reported that 5.5 million people had been displaced – a new record of sorts.

5.5 million people were displaced in 2014. UN's @Refugees calls for a greater response: http://t.co/qdQ5IU0eDt Via @guardian

The Abbott Government has benefited from Indonesian governments that have been willing to enforce an Australian domestic policy. If that changes, the “we stopped the boats” boast will quickly cease.

Third, it is quite simply a waste of money. Filmmaker Tierney said that her initial reservations dissipated because of the positive aims of the project.

“The impact this film will have on a person’s decision to attempt a journey by boat to Australia cannot be underestimated... [because it could] ... save people from detention, disappointment and even death."

If someone fears for their life and that of their family, no film will stop them fleeing. The horrors of the current conflict are there for all to see, and the imaginary queue is nowhere in sight.

The unfortunate truth is, however, the government could save money by simply showing what life is really like inside the detention centres people will be sent to if they do attempt to make it to Australia: from child abuse to suicide attempts, and the mental health deterioration that follows when people lose all hope for the future.

Rather than spending $4.1 million to produce this film, the Government would be better off showing the many reports documenting life inside the centres. A dramatised event is no replacement for the horrors of what is really going on.

Horrors of #ManusIsland - Aus born out of immigration, yet we take in fewest #asylum seekers of any developed nation http://t.co/90Xw1n77HB

The Refugee Council of Australia’s president, Phil Glendenning, stated that:

"I don’t think the government understands why people are on the move if they think a TV drama will be a deterrent."

But if we were cynical, we could see such a project as pandering to the latest round of anti-immigration movements such as Reclaim Australia.

Is Abbott pandering to mob rule to retain power & is that why Reclaim Australia resonates with him? http://t.co/cSk9RD0gXp

Abbott says only Coalition can stop the boats, other govts would “succumb to the cries of the human rights lawyers”. http://t.co/Gfm8qc8CNP