Manus Island and the horrors in Australia’s soul

Abbott’s plan for a brutal immigration policy was clear before the election, so we all must take responsibility for the atrocities on Manus Island, writes Dr Benjamin T. Jones.

IT IS TIME TO STOP BLAMING Tony Abbott and Scott Morrison for the terrors, barbarism and inhumane treatment of innocents that is Australia’s present immigration system.

It is easy to point the finger at the Government – especially the staunchly unrepentant Morrison – as more details of violence and unrest seep through the immigration department’s veil of secrecy. Is it fair, however, to blame the Government — or do they have a mandate for the very behaviour that is now being condemned?

The few details we do have make for grim reading.

Iranian asylum-seeker Reza Berati was killed after having his head stomped on by riot police attempting to quell a protest. It is a shocking irony that a young man fleeing violence should meet such a brutal demise in Australian custody. Thirteen others were seriously injured with guards using sticks, iron bars, rubber hoses and other weapons to punish rock throwing protesters.

Broadcaster and academic Waleed Aly has argued that Australians have no right to be outraged by these events because:

'The whole point of detention for asylum seekers is horror, whether it is acknowledged or not.'

The employment of a notorious PNG riot squad; the creation of a ghoulish graphic novel depicting the misery of life in detention; the shamelessly political newspaper ads in the last days of the Rudd Government, insisting even genuine refugees will never be settled in Australia; are all part of a concerted effort to terrify vulnerable people.

IA columnist Bob Ellis has delved into the ethical gymnastics Scott Morrison must complete to justify the abuse and now killing suffered by people in Australian care.

Desperately looking for excuses, Morrison first declared the incidents took place outside of the detention centre and therefore outside his jurisdiction. He has since had to make an embarrassing retraction, leading to calls for him to be sacked. Abbott has backed his man in typically macho fashion, saying he is a good man but not a “wimp”.

This Machiavellian rhetoric has been carefully selected to present Morrison as hard but fair. It is a direct response to a poll that found an astonishing 60 per cent of Australians want asylum seekers to be treated more harshly.

Morrison must be held accountable for the abuses occurring on his watch, as must Abbott, who has blindly and dogmatically supported him.

Ultimately, however, it is the Australian electorate is culpable for the abuse and trauma suffered by asylum seekers — people legally entitled seek refuge and whom Australia is legally obliged to accommodate.

Unlike education, health, broadband, jobs and the other areas where Abbott has backflipped since the September election — on the issue of immigration, the Government does have a clear mandate.

In the lead up to the election – in fact for years before the election – Abbott endlessly beat the same monotonous drum — the Coalition will "stop the boats". When ABC 7:30’s Chris Uhlmann pressed on how this would be achieved without cooperation from Indonesia, Abbott glibly and endlessly replied:

“John Howard stopped the boats. We can do it again."

The absence of specific details was telling — like a mob boss offering to make a problem “disappear”. The message from Abbott was simple and unambiguous — you don’t want to know how.

Stopping the boats was the centrepiece of the Coalition’s election platform but they were adamant in refusing to say how. Farcically, even the Liberal candidate for Greenway, Jaymes Diaz, had no idea.

Having secured victory on the premise of results without scrutiny, Morrison has shown open contempt for the media, limiting and then abandoning regular press conferences.

When forced to face the media pack, Morrison has taken on the attitude of Jack Nicholson’s iconic Colonel Nathan R. Jessep from A Few Good Men. In the penultimate scene, Tom Cruise’s Lieutenant Daniel Kaffee demands to know the truth.

As Morrison continues to hide behind a litany of excuses – we don’t discuss operational matters, we won’t give the enemy our playbook, and so on – he is reminding Australia of the immigration contract we signed on 7 September — we don’t ask, they don’t tell, the boats just stop.

That was the deal.

There are only two ways to stop unauthorised boats coming to Australia.

The first is to invest heavily in international aid and support countries facing civil war, famine, natural disasters and other strife. This approach addresses the “push factor” and is the only ethical way to limit the number of refugees seeking asylum.

The other approach – the government’s approach – is to limit the “pull factor”. The grim reality is that this involves making life for refugees so bitter that it seems worse than the torments they flee.

The Australian public must now face a dark night of the soul.

When John Howard tried to introduce mandatory off-shore processing for all unauthorised boat arrivals in 2006, it was blocked by his own dissenting backbenchers and a senator from the moderate faction. In 2012, it was the Labor Party who passed an even tougher law excising the mainland from the Migration Act. Immigration policy from both major parties has lurched to the extreme right and the present government seems determined to push it further still.

With the realities of life on Manus Island forcing their way to light, the happy guise of ignorance has been stripped from the electorate.

We can no longer continue with the Government’s comfortable “don’t ask, don’t tell” truce. We know that Abbott and Morrison are using cruelty and malice as a weapon of deterrence and if we are honest, we knew that was the plan all along.

On the issue of immigration, Abbott is not being underhanded or dishonest. He is delivering an election promise — a sick promise to use whatever vile tactics are needed to scare refugees away from these shores.

In two years time, he will seek re-election and will promise to keep stopping the boats but – wink wink, nudge nudge – he cannot go into specifics on the operational details. We know the deal. We know the results.

In a democracy, you get the government you deserve.

Australia’s international reputation is on the line. The world watches on. 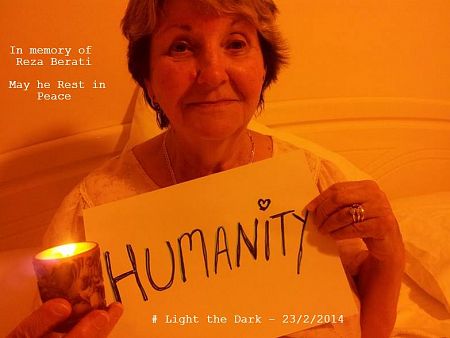