An evasive Christopher Pyne sinks further into the Ashbygate mire after some surprising revelations on Sunday by Longman MP Wyatt Roy. The Ashbygate Trust investigates.

IF YOU CAN IMAGINE holding a delicate bone china teacup, saucer in the other hand, sticking out your little finger, putting on a toffy English accent and saying, “Pyne” — it will come out as “Pain”. Try it.

And it is in a world of Pyne that Christopher is about to find himself in.

Everyone, it seems, is pointing the bone china teacup directly at him — especially the Member for Longman, Wyatt Roy.

Roy had registered as only a minor blip on the Ashygate radar, a small pulse off to one side. His family apparently once owned Gowninta Farms, the same enterprise where Ashby had been marketing manager and gave tractor rides to the kiddies before accepting employment with the Speaker. The Roys had sold and moved on by the time Ashby arrived.

Maybe nothing in it, maybe just the ex-Member for Longman helping the new.

But Roy and Brough have connections. It’s a long story, most of which is beyond the scope of this update, but it has to do the Kawana branch of the LNP, the members of which have long held a deep-seated antipathy to Slipper. Kawana is Mal Brough’s home branch.

In the 2010 election, many Kawana Slipper-haters refused to work on his campaign and instead swung their support behind Roy in Brough’s old seat of Longman.

Here is a video of their activites on the day:

Wyatt Roy campaign worker attacks ALP volunteer while Roy stands by and does nothing. http://t.co/fIXuAVrpkq

These are the same people who supported Brough when he won Fisher.

In a further 60 Minutes extract aired on Sunday 14/9/14, based on an interview Roy did on ABC local radio in Brisbane where, amongst other things, he admitted to two meetings with Ashby:

In the first, according to Roy, Ashby went to him, showed him the text messages, explained his pain and had a cry:

“He was very upset and distressed and went through the ah, the text messages, was, you know, basically in tears and…I went and saw Christopher and I simply said that, you now, a staff member had come with these, you know, pretty serious allegations so I passed on the name of a solicitor.”

‘Passed on’, which could be interpreted as saying he passed on a name given to him by Pyne.

We know Ashby collected a bottle of wine from Pyne’s office on 22 March 2012. This was a bottle that had been given to Tony Abbott to sign as a farewell present for one of Slipper’s long-term staffers Richard Bruinsma.

There was much speculation at the time regarding Ashby’s reason for visiting Christopher. After all, couldn't he have just collected the bottle directly from Abbott's office?

But Ashby now alleges his real purpose in attending Pyne’s office was to double-check with the main man that Wyatt’s assurances Pyne had indeed said a lawyer would be provided.

Ashby’s diary suggests he held a telephone conversation with Roy at 1.35pm on Friday 23 March 2012. It was in this conversation that Ashby was given the lawyer’s details. “Passed on”, as Roy said.

The program then showed a screen shot of bits of an email allegedly written by James on Monday 26 March which opens:

It’s interesting that the subject of the email is noted simply as ‘touching base’.

“… clearly under the impression he was being provided with a lawyer at no cost. In the end, that lawyer didn’t take the case.”

Evidence put to the Federal Court shows Ashby consulted with former National Party President David Russell QC on 6 April 2012, but Russell didn’t take the case. He is a tax lawyer who happens to share his chambers building with Rachael Francois, a barrister favoured by Harmers who had worked on the McInnes/Fraser-Kirk matter. She subsequently worked on the James Ashby matter.

Ashby consulted David Russell on 6 April. Russell charged $1, as close to pro bono as you can get.

Here is a possible scenario which might be a bit rough, but anyway:

The idea of attacking Slipper through the courts was conceived in his own electorate of Fisher.

Through Kawana branch member Mal Brough, a proposal was made to the Coalition. Pyne gave it a more than sympathetic hearing. 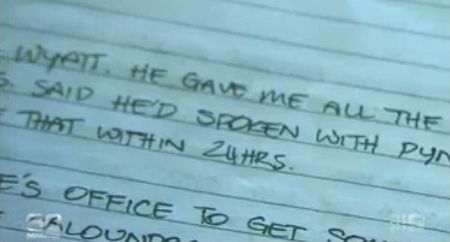 Ashby did not ‘lob’ in Pyne’s office unexpectedly — it was an arranged meeting, with the wine a convenient cover from immediate curiosity.

He says in that their 22 March meeting Pyne offered him future job security and a good lawyer. Pyne then did a bit of consulting.

Ashby met again with Roy who told him it was all clear with Pyne and a lawyer would be paid for within 24 hours.

On Friday 23 March David Russell’s contact details were provided to Roy then ‘passed on’ to Ashby in a phone call at 1.35pm.

Friday 23 March, incidentally, is the day Ashby met with Mal and Sue Brough at their home, allegedly, telling Brough for the first time of Slipper’s naughty texts.

On 26 March, the next working day, Ashby emailed the lawyer, David Russell.

Brough, Doane and Ashby then met with Russell at his Mooloolabah penthouse on Good Friday — 6 April 2012.

Russell, who had no particular fondness for Brough, realised the idea of Ashby and Doane taking jobs within the LNP after the allegations became public would be gob-smackingly stupid and quashed the prospect. Ditto the suggestion the LNP would provide a lawyer. It would not be a good look. Fortunately, the name Harmer’s cropped up in the meeting.

That Easter, Brough and Hockey paid a visit to Clive Palmer, who declined Brough’s request to stump up for the for the legals.

Just who did remains a mystery.

Pyne stumbled his way through questioning about the affair last week following the initial 60 Minutes Ashby story ‘dancing around the questions’, incapable it seems of giving a direct answer.

Did you offer Ashby a job?

“Mr Ashby did not get a job from the Coalition, either from the LNP or the Federal Government. Certainly my intention was never to lead him to believe job would be provided to him.”

Did you tell Ashby you’d accuse him of being a pathological liar if he said anything?

“Well I certainly would not have used that language and I would have indicated that when the Speaker’s staff are in my office telling me he felt uncomfortable that would affect my relationship with Mr Slipper as the Speaker if that became known.”

Is it true you promised Ashby a lawyer?

“No solicitor was provided to Mr Ashby.”

These kinds of linguistic party tricks might have seen Pyne through the easy, roughshod days of opposition, but in the spotlight of government they simply don’t cut it.

Pyne has not yet called Ashby a liar. Misinterpreted is the worst he’s been able come up with.

In the halcyon days of the Howard Government (remember those?), Pyne is said to have been kept firmly on the back bench because of the very real fear he would end up on the front page for all the wrong reasons.

Postscript: Has the world changed on its axis? 60 Minutes is news? Dare we say it, after our initial reservations, in this matter they are doing a good job.