The Ashbygate Trust reveals that Federal Police have investigated allegations James Ashby perjured himself in his court case against Peter Slipper and have referred the matter to the Commonwealth prosecutor.

And like any police force anywhere, upper command levels are subject to a range of political pressures — from demands of performance to demands of look the other way.

The role of the AFP in Australian life is both subtle and overt. From deep surveillance to the gaudily-painted vans at any airport. The Bali 9 busts will forever haunt their corporate memory, but other things you’ve never heard of have saved our collective bacon.

So we’re not sure what the AFP are up to in the matter of perjury allegations against Ashby.

Back on 8 September last year. Michael Danby MP. Labor member for Melbourne Ports, wrote to Robert Bromwich, Director of the Department of Public Prosecutions, pointing out that, in an interview Ashby had recently given 60 minutes, he’d more or less confessed he lied in his affidavit: 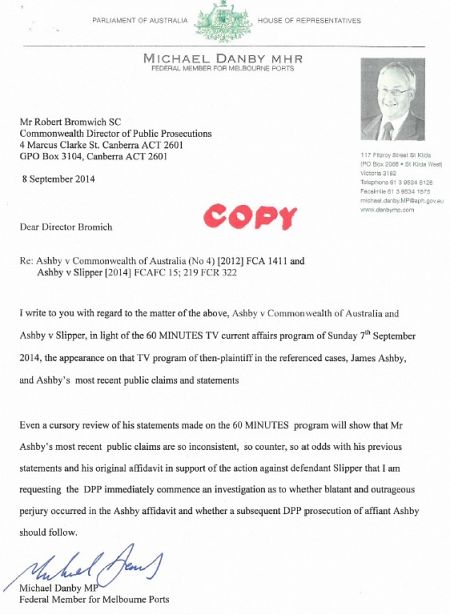 To its credit, the DPP acted and referred the matter to the AFP. On 21 October, AFP Assistant Commissioner Ian McCartney, National Manager Crime Operations, wrote to Danby,

'The AFP has assessed the matter and will undertake an investigation into the allegation. You will be advised of the outcome in due course.' 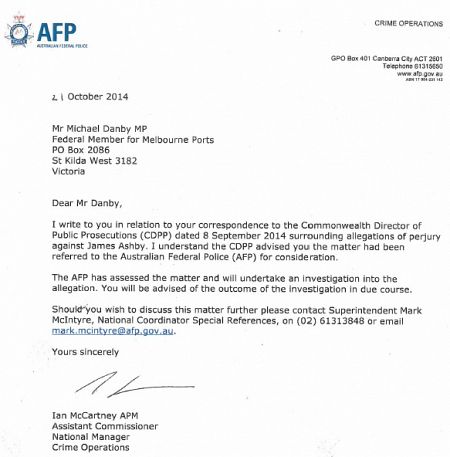 A reference was given to 'Mark McIntyre, National Co-ordinator Special Reference' for any further enquiries.

Then, on Tuesday 17 February, Danby’s office wrote to Channel 9, producers of the 60 Minutes programme, to advise them:

'Our office has just been advised that the AFP have referred the issue back to the DPP for them to make a final recommendation on whether perjury was committed.' 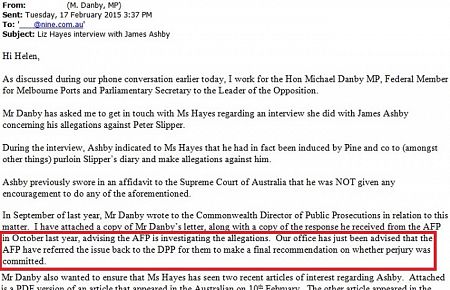 We don't know what they have advised the CDPP, but we shall see — good, bad, diligent, bludging, smart or dumb.

We live in hope it is the former on all counts.

Get up to date on Ashbygate here.