The new Wikileaks Party under Julian Assange has just had a messy internal brawl raising questions about its bid for Senate spots on September 7. Deputy editor Sandi Keane reports.

THE WIKILEAKS PARTY moved quickly today to counter the fallout over its preferencing deals with an explanatory statement on its website.

Julian Assange’s bid to “keep the bastards honest” in the Senate suffered a blow when his then Victorian running mate, Leslie Cannold, resigned early this week. Alleged machinations to roll the party’s governing body, the National Council, over the preferences debacle ended with four Council delegates joining her.

In a media release, ethics commentator Cannold blamed preferencing decisions and the subsequent violation of the party’s stated principles.


“The eclectic base of the party is both its strength and its challenge. We have people of incredible diversity from persuasions across the political spectrum. Any such gathering will have considerable disagreement. That’s what we’re working through so we can use the base in a constructive way.”

Assange has hosed down speculation that his Senate bid is doomed by describing the preference fiasco as “teething problems”.


"I admit and I accept full responsibility for over-delegating functions to the Australian party while I tried to take care of those [Edward Snowden and Bradley Manning] situations.”

The party’s statement today explains the confusion about preferences in WA and insists it had placed the Greens first among the major parties in all three states where it was fielding a candidate.


'The National Party there [WA], unlike in other states, is an independent small party and not part of the Coalition. In the last election, it received just 3.5 per cent of the vote while the Greens received 14 per cent.'

The WA decision was later explained by Assange as an affirmative action decision to preference Aborigine, David Wirripanda.

In another move to placate its supporters and the Greens, the WikiLeaks Party has released its email instructions as evidence of its admin error in NSW, showing preferences for the Greens over the Shooters and Fishers and Australia First.

In spite of WikiLeaks Party's quick response, Julian Assange looks almost certain to be trumped by the very party that has long championed the exiled activist’s whistleblower website of the same name — WikiLeaks.

The Greens might not be feeling the love this election in the wake of former leader Bob Brown’s departure, but are set to triumph over Assange in Victoria to secure the last Senate seat. This was the view of pollsters before the shock resignations this week.


"Julian Assange has no chance at all. Assange doesn’t have a significant organisation. The Greens do. They’re a serious party. I think the Greens will win the [final] seat in Victoria. [The Coalition] will win three and Labor two.”

It was a similar story from ABC’s election analyst Antony Green, who told IA that he'd


“...be surprised if Assange gets 4% — unless they have people staffing polling places across the state."

However, this expert analysis appears to fly in the face of a mid-year opinion poll, in which 27 per cent of Victorian voters and 18 per cent of those in NSW said they would consider voting WikiLeaks in the Senate. Candidates need just over 14 per cent support to get across the line in the upper house’s proportional voting system. However, with the election campaign now in full swing, votes would have typically flowed back to the major parties. 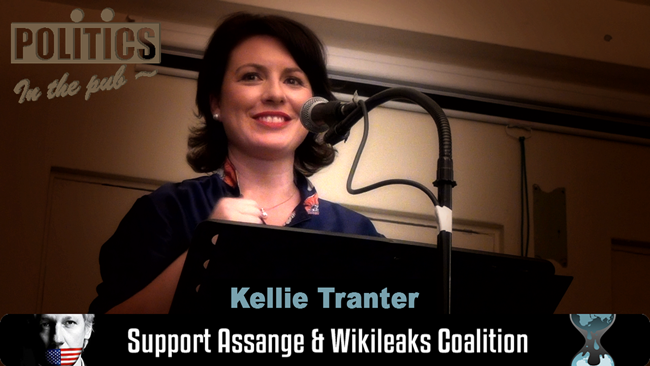 Mackerras and Green hold little hope for her, as Mackerras told IA:


“[The Greens’] Cate Feahrmann presents very well on The Drum as a moderate. She’ll take a seat from Labor in NSW.”

The battle between the ambitious newcomer and the party that has become an established thorn in the side of the major contenders is playing out in a variety of ways, with the Greens drawing support from a seemingly unlikely quarter – the farm vote.

Its hard line against fracking – the controversial method used to extract coal seam gas, much of it beneath rural land – as well as other farmer-friendly policies have laid siege to the National’s rural hegemony. Chief among among them are the Food Security Roadmap, tackling the supermarket duopoly with an $85m plan for farmers to bypass the big two supermarket chains and a crackdown on foreign farm takeovers.

The major charm offensive by the Greens as they leap, wellies-and-Dryzabone-clad, into the traditional territory of the Nationals appears to be paying dividends.

At a recent 1000-strong Farmers Against Fracking rally in Melbourne, farmer, Julie Boulton, a dairy farmer from Southern Gippsland, expressed disappointment in the Nationals:


“They’re supposed to be looking after country people and for the first time in our lives, we’re very interested in what the Greens have to offer.”

The pollsters’ tip for Victoria, the Greens’ Janet Rice, who campaigned alongside the farmers at the two biggest Victorian anti-fracking rallies yet (at Seaspray and Melbourne) summed up the protestors’ concerns:


“We’ve got the potential for coal seam gas and other unconventional gas all across Gippsland which would be such a disaster and impact on [the region’s] potential to be a clean, green economy.”

The Green’s pitch to rural voters is unlikely to jar with the WikiLeaks Party manifesto. But while WikiLeaks supports the rights of farmers (make that people’s rights in general) its policies are still on the drawing board.

Both parties are looking to capitalize on voter discomfort with the major parties’ tough stance on asylum seekers, but differ on approach.

Wikileaks candidate, the academic and IA contributor Dr Binoy Kampmark, said the Greens policy of increasing our intake does not in itself guarantee safe processing:


“It’s just not viable for Australia to take millions of refugees.”

Kampmark believes that a global solution is paramount, starting with safe refugee processing points along the way.

The WikiLeaks Party also has media concentration in its sights promising to lobby for independent investigative journalism with for tax breaks for organisations which want to pursue public interest journalism.

In the wake of government corruption scandals in NSW, the party’s promise of ‘Transparency, Accountability and Justice’ may also lend weight to WikiLeaks’ campaign.

But the battle for the fledgling party remains uphill, especially in the face of Labor’s decision to preference the Greens in the Senate. This has bolstered the minor party’s chances in Victoria and NSW, its two best hopes.

WikiLeaks might expect the cache of its brand to carry it part of the way in a battle marked by a record 50 plus parties that has stretched the ballot paper to over one metre in width. Brand recognition could play in WikiLeaks’ favour as voters struggle to make sense of the line-up that includes the Pirate Party and Coke and Bubbles Party — all printed in 6-point type. The Australian Electoral Commission has said it has ordered 120,000 magnifying lenses to ease voters’ frustration.

Meanwhile, holed up in the Ecuadorian embassy in London, Julian Assange remains unfazed by the pundits. Speaking via Skype to a recent mid-winter forum in Fitzroy – an audience that included judges, lawyers, academics and teachers – he vowed to expose corruption and injustice and to


"...turn on the lights so the cockroaches scatter."

The stargazers tell us the Age of Aquarius kicked off at the beginning of 2013, ushering in an era of light, freedom, democracy, humanity and nonconformity — values that could be taken from WikiLeaks Party’s campaign playbook.

But based on the pollsters' predictions, the planets will need to align on September 7 for Julian Assange to take his place among the red leather trenches of parliament’s House of Review.