Why economics ignores debt: The power of Big Money

Mainstream economics is not a science, but rather a flawed, self-serving ideology — and nowhere is this more evident than in its approach to finance and debt, writes managing editor David Donovan.

Why everything you thought you knew about economics is probably wrong (Part 6): Debt and the power of Big Money

THE MAINSTREAM – or what is commonly known as 'neoclassical' – economics, of the sort predominantly taught at school and in undergraduate university degrees, might be almost amusing were its influence and impact not so serious and severe — and nowhere is this more evident than in its eyes-closed approach to debt and finance.

Neoclassical economics almost entirely ignores the effect of debt on an economy, assuming it to be a simple transfer – in and out – therefore having no net impact.

The idiocy of this approach is not only blindingly apparent to any person who has or has ever had a mortgage, but reaches the level of utter absurdity when one recalls the global financial crisis – the one we had just a few years ago – which was caused by, yes, unsustainable levels of private debt. That's why the United States spent trillions bailing out their banks and why several European countries are now effectively bankrupt.

It is also rather astonishing when we consider that repaying public debt has – ostensibly, at least – become the central driver of fiscal policy in Australia under the Abbott Government.

Indeed, not only is debt a factor in micro and macro economics — it is, perhaps, the central factor.

Economics is essentially the study of measurable financial transactions in an economy. Thus, it largely becomes a study of behaviour — how different factors interact and influence people and other economic units' choices of transactions.

Therefore, the first reason why debt is more than merely a simple transfer is that it profoundly changes behaviour — particularly where the debt is one in which a financier is given security over an asset.

Let's consider one of the most common forms of secured debt — the house loan, or 'mortgage'.

When a person needs to pay off a mortgage every month – and with their house on the line – this debt will tend to make mortgagor more risk averse. This will usually have a deflationary impact upon his wages, with the mortgagor being more likely to seek job security rather than higher wages and thus less likely to engage in risky behaviour, such as entrepreneurial enterprise.

On the other hand, the availability of debt, particularly at low interest rates, can add to demand for housing, thereby having an inflationary impact on property prices. Historically low mortgage rates in Australia since the late 1990s are one of the reasons for Australia's private debt and property bubble — both of which pose a significant risk to Australia's future economic prosperity.

Indeed, the ready availability of cheap money in the United States and other western economies, combined with a lack of transparency by financial institutions about the true nature of certain collateralised debt products, was the primary cause of the GFC — the profound ramifications of which are still being felt around the world.

And we have only considered house loans. Debt also has a profound effect upon the behaviour of business, governments, entrepreneurial activity, stock markets — in fact, every part of the economy, bar none.

Ignoring debt is obviously absurd — so why does the dominant neoclassical economics do so?

To understand why, it pays to understand that neoclassical economics is less of a science and much more an ideology. It is, in fact, the self-serving so-called "free market" or "free trade" ideology of the rich and the powerful — the people with all the money, the people to whom debts are owed.

These are the ones who promote and entrench neoclassical economics as an unquestionable bedrock in the intellectual and political life of western nations.

By ignoring the role of debt in the economy, Big Money − big banks,  big business and old money − are able to obscure the inherent flaw in our economic system that enables them to perpetuate their economic dominance and even increase their wealth, thereby increasing inequality in society.

There is a naïve assumption by many that it is in everyone’s best interests for the economy to keep growing and not fall into a recession. In fact, Big Money loves the boom and bust cycle − the creation of economic bubbles − because the bust is where they clean up — where the dealer wins.

This is how it works.

During expansionary phases in an economy, financiers – such as banks – may make a modest few per cent profit on each loan they write — a steady, yet unspectacular earner.

Where they really cash in is during downturns. This is when it becomes possible to be able to foreclose on loans that mortgagors had been paying off for some time. Thus, the bank ends up with an unencumbered asset they can then sell on for a tidy profit or hold onto until the market rebounds.

The Commonwealth Bank demonstrated how this is done after purchasing Bank West at the start of the GFC:

And who are the only ones able to afford to buy assets during a recession? People without debt — or in other words, old money. Not only can old money afford to, but during a market downturn, they are able to buy these assets at discounted prices. Thus, during recessions, old money further accumulates assets and wealth.

They say that when the tide goes out, you are able to see who is swimming in the nude. For big, established businesses, a recession gives them the opportunity to purchase newer, more highly leveraged competitors who have been unable to meet their debt commitments — purchasing not only their assets, but at the same time handily eliminating competition.

Even in the cases of depressions – such as the GFC – banks and the biggest businesses are usually able to flex their political influence to get bailed out by the taxpayer, being deemed "too big to fail".

Indeed, so important are recessions to Big Money, if they didn't happen naturally, they would need to be created.

The influence of Big Money is highly relevant in Australia right now.

It goes without saying that the Abbott Government is a proxy for Big Money. This can be seen, as examples, by its eagerness to remove consumer protections for financial advice and through NAB chair Michael Chaney desperately trying to sell former bank employee Joe Hockey's austerity budget.

We know from the Eurozone that austerity kills economic growth, but Hockey's version of austerity doesn't even pay down public debt — at least not in the near term. Its sole aim appears to be to put severe financial pressure on the poorest and most disadvantaged. It would appear, therefore, that it is a Budget written by the banks to enable them to go on a foreclosure spree on poor people's houses without significantly affecting other parts of the economy.

Neoclassical economics ignores debt and all of its effects because highlighting it would expose the so called "free market" as intrinsically anti-competitive and, indeed, rigged in favour of Big Money – big banks, big businesses and old money. 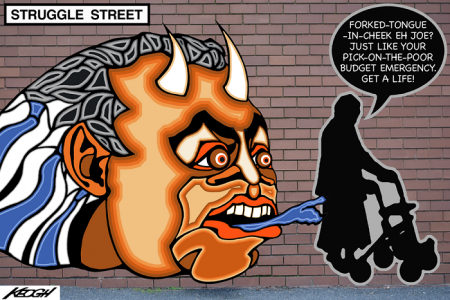