Who really controls the levers of power? The COAL-ition or the COAL-industry?

Who really controls the levers of power in Australia? The COAL-ition government or the COAL-industry? Renew Economy's Giles Parkinson looks at Big Coal's hypothetical (?) "to-do" list.

JUST IMAGINE if Australia elected a government owned and operated by the coal industry and other fossil fuel interests – a COAL-ition, if you will – and gave it carte blanche to implement the policies that would best service its interests.

Where would it start?

Well, it would probably identify its weak spots and do something about it. So it would need to ensure that any independent advisory bodies were singing from the same songbook.

It would have to do something about the fact that demand is falling for its products.

It would need to eliminate its competition.

It would have to drop any market signals that worked against its interests, and it would need to remove environmental controls, and ensure that public debate was neutered and that the majority of media were aligned with their interests and ideology.

Having drawn up the major points of a master plan, it would need to leap into action.

We managed to find a copy of their “to-do” list.

Look, the first thing we need to do is prop up demand.

Despite all the best predictions, demand has actually been falling for the past five years, and it’s been eating into profits. The International Energy Agency reckons energy efficiency is one of the tools to use to address soaring carbon emissions. And so do the United States. and China.

But that also means less demand for electricity generation — and, anyway, climate science is crap, so there isn’t a problem to addess.

We need to start by unwinding the state-based energy efficiency programs, with the help of the COAL-ition state governments and drop the national scheme that encouraged such nonsense, the Energy Efficiency Opportunity program.

Then we have to bury the energy efficiency task-force recommendations deeper into the bottom draw. It might save consumers money, but it does bugger all for fossil fuel profits.

So, whoever came up with this silly million solar roofs idea better shut up about it right now. We don’t want to encourage this stuff. And let’s see if we can’t slow down rooftop solar by dumping the small scale certificates.

And while we are at it, we should encourage some of our members to reject some solar installation requests, force others to downsize, disallow any exports, threaten them with big connection costs, impose higher fixed charges.

And if the bastards want to leave the grid, then we will charge them for that too.

The other thing eating into demand is rooftop solar. And the bloody things are doing it in the middle of the day, when the generators used to be able to switch on the gas and diesel generators and push up the price of electricity 10-fold.

There’s not a lot of solar, but it’s taking all that cream we built into the business models. Cripes, their debt financing depended on it.

Have you seen the Human Cost of Power - our film on coal and gas and health? Check out the 2 min trailer here: https://t.co/iEXnHAVkuC #hcop

The next thing to do is eliminate competition.

The coal boys have made clear that wind is forcing down the price of electricity, and if there is any more wind and solar, the coal boilers are going to be shut down so long they will start to go rusty.

And the gas boys are having enough trouble with gas prices trebling, and even their baseload generators have to be turned into peaking plants.

So we need another review and we need an outcome. Last time the RET was dumped even when an independent report said the best idea was to keep it going.

This time, though, we can’t risk confused messages. So let's load the dice and get someone who agrees the science is crap and maybe reckons that nuclear is probably the best solution — that’ll give us another 10-15 years of coal production before they realize how expensive that is.

And you better get a couple of fossil fuel lobbyists on the panel too and that modeling group that EnergyAustralia used to warn that the lights would go out if we had too much of this green energy crap.

And the good thing is we don’t need to hurry on this one, because just having a review will stop new investment anyway.

Get them to hold the consultations in camera and throw the findings into the Energy White Paper. That’ll take ages to finish.

Look, it’s not just wind energy we’ve got to worry about. It’s all that big solar PV, and solar thermal thingies that they are building in the US, South America, the Middle East, Europe, China, Japan, India and even in Africa, that’s going to cause a problem too. They reckon it’s already cheaper than gas.

And if those solar tower thingies with storage catch on, well, the only thing standing between us and oblivion will be the regulators and the shock-jocks.

So we better cut funding for CSIRO alternative fuels research, get rid of the Clean Energy Finance Corporation and the Australian Renewable Energy Agency before they get the costs of these new technologies down even further and the banks start getting big ideas.

I mean, even Macquarie Group is thinking about funding solar now, and if Rio Tinto realizes that solar is cheaper than diesel, then that profitable little sideline will be well and truly gone.

And don’t get me started on storage, geothermal and wave energy. I mean, imagine if they start using baseload and renewables in the same sentence.

Of course, we have got to axe the tax. That’s a great line we borrowed from the Canadians.

The transaction costs alone should turn most people off the idea, and the bankers won’t have a bar of it.

And just to be sure, we better make sure we cut the funds. Come up with a silly name like Direct Action, or something. That will confuse them, and find someone who can pretend we accept the science.

Look, if the carbon price stays and companies are encouraged to factor it into their business models and investment decisions, there will be hell to pay.

Better to set up some fund, so that these jokers with some do-good projects have to put together a big package and submit it for review by a bunch of public servants.

Look, there are a few other things we need to think about to cover our bases.

We don’t to foster too much informed debate, so best to get rid of the Climate Commission and the Climate Change Authority, get rid of a couple of hundred scientists at the CSIRO and put a bomb through the department of Environment.

We mustn’t allow any international agreements to get too far down the track, so let’s make sure our boys are throwing the spanner in the works at the UNFCCC.

We got to do something about this ACT government plan too. They want to build wind turbines and solar stuff — and they will probably do it cheaply too. It will make the rest of the country look backward. Might have to get some of the senior boys to compare turbines to mushrooms, people will think poison. And maybe call them hideous, or offensive or something.

This divestment thing could be a problem. And we’ve got a banking inquiry, which is supposed to look at systemic risks and all that do-gooder mumbo jumbo, so let’s make sure there is someone who can rubbish the science and keep control of things.

While we are at it, better to have someone in the key business advisory position too. If too many business people start talking about climate change, emissions control, supply chains, and international trade, we’re just not going to be able to get our agenda through.

The environmental changes are good too. Giving environmental controls back to the states (Camo and Bazza are already competing to be the coal state – can we get them on number plates, sunshine state sends all the wrong messaging).

Let’s suggest we allow the dredging, this environmental offset stuff doesn’t have to be scrutinized too closely, and maybe we can even give a royalty holiday to allow some of those coal projects to go ahead. Their finances are looking dodgy, but if we get them started, they’ll be hard to stop.

And while we are on environmental stuff, could someone please stop these silly requirements to make houses efficient. We need the heaters and the air-con to be running full bore to make a quid.

And, look, let’s make sure we got the media covered. Most of the tabloids will publish anything as long we give them a day’s break.

So if there’s another report on rising prices due to network costs or soaring gas prices, give them a heads up and blame it on green energy. They’ll never read the actual reports. 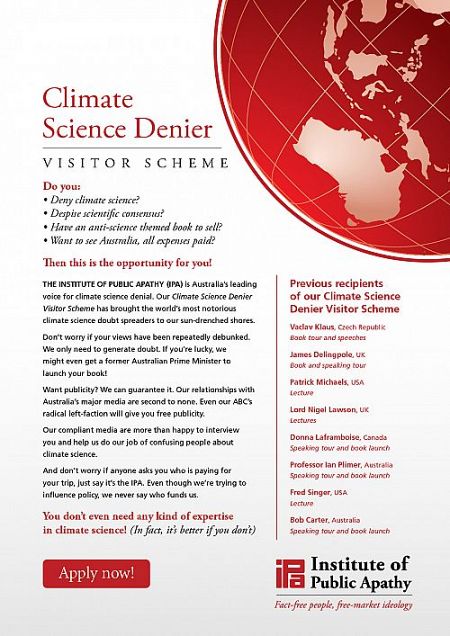 And lets make sure the IPA boys and all those in their orbit are included every policy on discussion panel on radio and TV. Even the ABC. We just can’t allow people to have sensible conversations about this stuff. You never know where it will lead.

So much to do, such a small mandate and so little time.

Look, Deutsche Bank has pulled funding from the Abbot Point port development! Somebody, do something!

* Editor’s note: We should point out that any similarity to actual events is entirely coincidental. Surely, that could never happen in Australia? What? Oh.

This article appeared in RenewEconomy on 23 May 2014 and has been republished with permission. Also read deputy editor Sandi Keane’s ‘The fossil fuel industry and who really runs Australia’.