We didn’t vote for this

We were not just lied to before the election, writes Bob Ellis, but lied to by fanatics who possess no stealth, guile or communication skills.

PYNE’S PLANS to teach kids that the Birthday Ballot was okay and killing three million Vietnamese a noble purpose, and sacking Utzon a wise precaution, and the WMD a reasonable mistake, and the Iraq War a significant victory, plus Morrison’s resmuggling of refugees into Indonesia, though Indonesians don’t want them there while protesting they do, lately show a government slyer and madder than most, and a new, foul chapter in what used to be our democracy.

For we did not vote for a fresh History War; or a Cold War with Indonesia, with ‘border incidents’ that could flare up some day into a real war. We did not vote for a doctor consultation co-payment, a cutback on Disability Care, a cancelling of Gonski, or less money for our old age.

We were not just lied to about these things, but lied to by crazies with no stealth or guile or, apparently, propaganda skills.

They are on 40 per cent already and heading south by the day, though Newspoll after Newspoll will be suppressed or tweaked to hide their oncoming avalanche into oblivion, and the Senate should move to bring them down, while they have the numbers, by threatening Supply, or an Inquiry into the war in Iraq, or Pyne’s complicity in the framing of Slipper.

A year ago, our concentrated focus was on Gillard’s pride and how we could salve it while persuading her to either ‘lift her game’ or step down for Rudd if her stuff-ups continued. Now, neither she nor Kevin arise in our thoughts any more. Once hailed as ‘The Dream Team’, they will hereinafter haunt Labor’s tribal memory like Evatt and Calwell — a pair of thundering dickheads.

Hawke, Keating, Beazley, Crean, Latham, Shorten shaped up in their time as adequate rough drafts of a Labor leader, but they did not. They seemed more like auditioning panellists on Sunrise, or auditioning contestants on The Apprentice, and the difference is an important one. A Labor leader, as a rule, should believe in something; or something other than self-advancement and self-assertion. An Apprentice contestant, a Sunrise panellist, can make it up as he or she goes along.

And oh what a waste was there, my countrymen.

Research back then showed Rudd and Gillard would fare better than Beazley and Macklin; history thereafter showed them ruining Labor all over the map. Discuss.

It is hard to know what will happen this year, and after. Pyne, Morrison, Abbott, Abetz, Bernardi, Cormann and the Bishops have the confidence of the mad, and this can get you a long way — as Palin lately proved, and Mirabella, and Campbell Newman, and Barnaby Joyce, and Bjelke-Petersen, and Billy Hughes and Hitler. Turnbull has the caution of the sane, and may not now make it in the chest-beating, ululating monkey-house the Liberal Party has lately become.

There seems no hope any more of good policy, or even an informative press conference. Secrecy, mendacity and national damage is now the future, as in a Caribbean tyranny; secrecy, lies, crazy speeches and a war on the known facts of science and history. 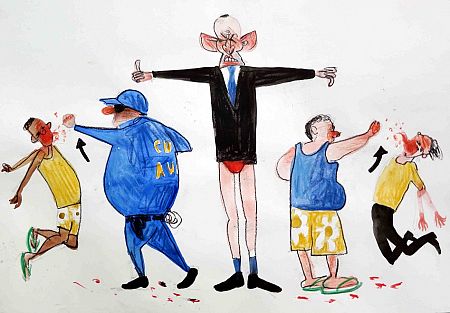