A FEW weeks ago, Watch this Space reported that a recently-added Twitter account @Panahi_Fans had been having some fun outing colourful Herald Sun columnist Rita Panahi plagiarising the work of her NewsCorpse colleagues.

Well, it seems she may have done it again. This time, the work she’s lifted is itself also subject to claims of unethical practices by the reporters involved.

Panahi’s Sydney colleagues at her sister paper, The Daily Telegraph, are in trouble for not checking a story told to them by two women they interviewed and photographed outside a western suburbs dole office.

One 17-year-old told Telegraph reporters Natasha Bita and Jack Houghton that she was on the dole and didn’t like working. Problem was, she had also told them she was working and had just finished school. 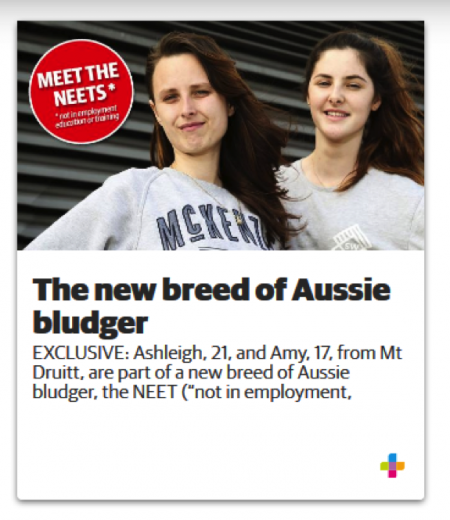 The trouble is, not a word of it was true. The young woman, Amy, had embellished her story. But she also gave the journalists her true story. It seems the reporters weren’t interested in the facts though.

As the girl’s angry father told The Guardian, Bita and Houghton just took the bits they wanted and left out uncomfortable facts:

My daughter was not totally innocent but she did say to the reporter "I work and I have just finished year 12" and he said "that’s OK we’re just going to ask you few questions." And then she just got caught up in it.

She didn’t apply for Centrelink. The story said she is not educated but she just left year 12 a week ago. She went to a trade high school and she studied business management. She is educated and she funded herself through high school by working at night.

But they didn’t put in any of that. She just fell into the five minutes of fame and went along with the story.

Yep, there’s a sting in the tale.

Right on cue Miss Judgment used the by now discredited story of Ashleigh and Amy as a backdrop to her own whinge about dole bludgers being a burden on their families and the rest of us too. 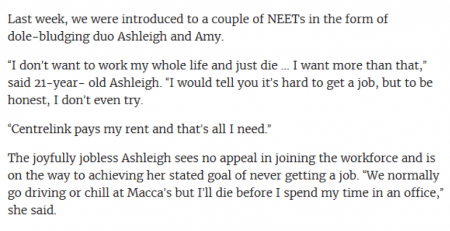 Not the first time

It’s not the first time the Telegraph has been in trouble for scapegoating and stereotyping the youth of Mt Druitt.

In January 1997, the paper ran a front page banner screaming 'The class we failed' and was successfully sued for defamation by a number of Mt Druitt High School students. Their claim was that the paper made them look stupid and implied they were too dumb to pass high school.

Mt Druitt has always been an unfortunate and easy target for the tabloid media as the awful SBS documentary [ahem] Struggle Streetdemonstrated.

Some of you might also remember the “poor old Paxtons” — a working class family misrepresented and maligned on one of the notorious 1990s so-called current affairs shows. A Current Affair got roasted on Media Watch at the time.

Why do the networks and tabloid papers do this stuff? It’s not as if they can easily get away with it.

Well, perhaps because its S.O.P. for the media and for government ministers who use fake families and prop people in their election campaigns.

Let’s see if Paul Barry has anything to say on Monday about this week’s poor performance by the Daily Telegraph.

Pauline Pantsdown versus The Australian

This week saw another social media spat developing between a senior NewsCorpse writer and a popular figure in the gay and lesbian scene.

Entertainer and social critic Pauline Pantsdown was hoping to put her career on the backburner, but thanks to the “revival” of serial racist Pauline Hanson as chief denialist for the flat-earth gang, she’s back in the spotlight.

A story in the Weekend Australian purported to have uncovered a “ferocious” social media campaign to force the cancellation of a secret strategy meeting of an anti-equality group headed by the conservative Christian, Lyle Shelton of the ACL.

The Australian’s David Crowe “exclusively” reported that the hotel involved had been “forced” to shutdown its Facebook page, “amid claims” that there had been “physical threats” from “marriage equality advocates”.

The Accor Group – which runs the Mercure hotel involved – issued a brief statement that mentioned threatening phone calls. However, despite phone calls and several emails, the hotel management would not clarify for IA exactly who it is alleging made threats or whether they have been referred to police.

When I spoke to Ms Pantsdown creator Simon Hunt this week, he confirmed that Pauline’s Facebook page had urged people to let the hotel know they weren’t happy about it hosting the ACL. Hunt alo confirmed to IA that his initial campaign was about the Safe Schools issue, not marriage equality.

I checked the posts and the comments on the Mercure page. There was nothing rude or threatening about any of it.

However, that hasn’t stopped the media and the ACL from taking advantage of The Australian’s beat up.

The Australian’s Jared Owens successfully “factuialized” the unverified link between same-sex advocates and the alleged threats to the hotel into a story trapping Bill Shorten into making a negative comment about the unproven incident. 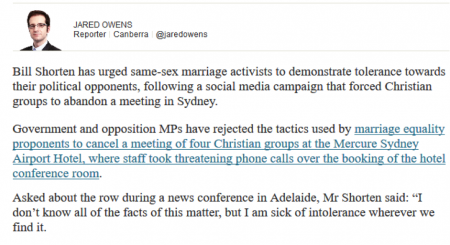 At least Owen had the decency to admit that Shorten didn’t have all the facts.

It’s a pity he won’t admit the same for himself.

Even Crikey has fallen into the trap.

In a “Tips and Rumours” column earlier this week, the usually reliable Crikey covered the Accor response confirming some type of phone threats.

But Crikey should know better than to begin the story like this:

'Some involved in a protest against the Australian Christian Lobby’s marriage event made physical threats to Mercure hotel staff.'

Two assumptions in this statement that are not supported.

Neither of these things has been confirmed by the hotel.

But Lyle Shelton has wasted no time in elevating these so-called threats and giving them “hero” status on the ACL webpages.

Shelton has shamelessly linked the allegations about threats to the Mercure to his own list of purported crimes by marriage equality advocates. His claims are far-fetched as is the allegation that the police have not properly investigated them.

However, false accusations tend to be repeated and part of the accepted narrative. I’m sure that this will happen with this incident too.

As IAs Deputy Editor Michelle Pini wrote this week, the plebiscite is looming as an embarrassing and costly mistake by the PM:

'Turnbull's cringeworthy lectures on why we suddenly need a plebiscite completely contradict his own so-called "beliefs" and every national opinion poll. This is the man who lectured the country on the right of everyone to marry whom they choose — where did that guy go?'

The only groups supporting the government’s plebiscite are those who oppose amending the Marriage Act. At the head of this mainly conservative Christian campaign is the Australian Christian Lobby.

We’ll see more of his dodgy claims about violent perverts in the coming months. Many of them will be given oxygen by The Australian and its stablemates.

At the beginning of September, Malcolm Turnbull quietly announced in parliament that military “rules of engagement” for RAAF forces operating in Iraq and Syria would be changing to overcome a “legal risk” to troops subject to Australian law.

The publicly-announced changes would allow fighters, airborne command planes and flying tankers to participate in coalition missions against alleged ISIS operatives even though they are not taking part in direct and active” “hostilities” against coalition forces.

The legislation to restore what Turnbull offhandedly described to the House as a “legal anomaly” has been brought into sharp political focus this week by the “bungle” in Syria, which implicates RAAF aircrews in the accidental deaths of more than 70 Syrian troops.

In the Senate, Attorney-General George Brandis repeated – almost word for word – Turnbull’s address to the House.

The change gives effect to changes in the Crimes Act to allow wider targeting of individuals now protected by the current (and very secretive) “rules of engagement” in Iraq and Syria.

"We will move quickly to introduce necessary amendments to the Commonwealth Criminal Code that will bring our domestic laws into line with international norms. This means that ADF personnel will be supported by our domestic laws. They will be able to target Daesh at its core, joining with our coalition partners to target and kill a broader range of Daesh combatants, which is consistent with international law."

Opposition leader Bill Shorten in his reply was a bit more forthcoming about the changes:

"[T]he Chief of the Defence Force has briefed me about the proposals on targeting, which the Prime Minister's statement dealt with. The view of the CDF and the ADF is that it is necessary to update domestic law to be consistent with international law. International law makes a distinction between civilians and members of terrorist organisations. The domestic law has a narrower definition, which has not been updated to deal with the developments of state-like terrorist organisations, such as Daesh."

If you unpick the highlighted sections of this statement, it says a lot more than you might think.

What Shorten is saying, in effect, is that domestic Australian law has a broader definition of civilians in relation to what defines “members of terrorist organisations”, which imposes a stricter limit on whom and when and where and why and how the RAAF gets involved.

It lends a rather chilling echo to “commander-in-chief” Turnbull’s statement of intent:

"Let me make myself very clear to those who contemplate joining Daesh: take up arms against us and you will join the over 60 Australians and thousands of other combatants who have already been killed in the Iraq and Syria campaign."

But that shouldn’t get all the laughs. Bipartisan patriot-in-arms Bill Shorten also had some timely homilies of his own:

"Our ADF have a robust targeting policy and protocols. They have implemented their missions and they have degraded the enemy, with no civilian casualties to this point."

Maybe, but the Syrians and the Russians might consider the “accidental” strafing and bombing of its troops a sign that “robust” targeting policies were not working.

While the bill waits its turn for a spin on the Parliamentary treadmill, Independent Nick Xenophon, the Greens, Andrew Wilkie and some of the cross-benchers have called for an inquiry into the botched bombing raid last weekend.

Greens defence spokesperson Scott Ludlam said the crossbench would also be taking a strong interest in the proposed new “rules” and he explicitly linked the changes to the botched Syria raid.

"This has all occurred at a time when the Government and Labor are seeking to expand the targeting powers of the Australian military. The Australian Greens have deep concerns about this proposal, and will be further considering its impacts in light of this incident.”

For good measure, Ludlam added that a disaster such as the “botched” attack on Syrian ground troops had been foreseen, and only added to the “chaos” and “terrible violence” in the country.

Bipartisan support for the new rules will see a broader range of so-called “target” cells and individuals to be slated for attack. Given the poor track record of coalition forces, there is no reason to have confidence in the assertions it will keep civilians out of harm’s way.

Brandis has not yet brought the changes before Parliament, but the Greens, Xenophon Team and Andrew Wilkie are considering how to question the Government over the issue in coming weeks when Parliament resumes.

Want more? Watch this Space! Subscribe to IA for just $5.