WALK FOR JUSTICE: Walk a mile in the bare feet of refugees on Palm Sunday

The endemic racism and repugnant rhetoric endorsed by some of Australia’s politicians and promulgated through both Houses of Parliament, as Hansard will forever attest, has legitimised the global bloodsport of demonising Muslims and refugees.

The extent to which parliamentary hatespeak has contributed to New Zealand's Christchurch massacre in the mosques will become better known as the Australian who has been charged with this heinous crime comes before the Court.

The Liberal National Party Coalition, in particular, continues to beat the propaganda drum with a maniacal and sometimes messianic fervour that borders on criminal incitement, and is defiant of international laws and covenants co-signed by an Australian pen with ink sometimes red and still warm with Australian blood.

Were it not for a vigilant, disparate and dissenting national peace army of civilian activists, drawn from all walks of life, various refugee advocacy agencies, courageous whistleblowers and media, the incessant lies, misinformation, and disinformation peddled by the Coalition, would not have been publicly exposed as a mostly malicious litany of fake news.

The offshore illegitimate outsourcing of our conscience and refugees to sub-contractors, other governments and other countries of our refugees is more than political cowardice by our governments.

OUTSOURCING OF OUR REFUGEES IS PEOPLE TRAFFICKING RORT

It is more than a billion dollar people trafficking rort by the LNP; more than a lucrative cashcow for corrupt officials, shonky operators, fraud and scandal. The long years of secrecy and lack of transparency of what has happened – and is still happening – on the islands of Manus, Nauru, Christmas, Papua New Guinea, the United States and elsewhere will no doubt contribute to the Coalition’s undoing in next month’s federal election.

Once again, the LNP have misread and misjudged the Australian people. It has escaped their notice that we have supposedly abandoned The White Australia Policy and have long been a multicultural melange. The bigotry and hatred that is their mantra poisons the very well from which we all drink.

The isolating of refugees fits into the sordid and defamatory narrative that all refugees are terrorists, rapists, murderers, criminals — too dangerous to be allowed to set foot on Terra Australis. And that includes babies and small children.

OUR WHITE COUNTRY! OUR WHITE RULES!

Nor are they worthy of Visas on humanitarian grounds. No, those humanitarian visas are only granted by Home Affairs Minister Peter Dutton to white-skinned au pairs from Europe and only if Gillon McLachlan, CEO of the AFL, renowned humanitarian and au pair refugee advocate, is a mate.

The Government will argue that there is "no refugee problem".  That’s true, in the sense that it is the Government(s) that is the problem.

The Government argues that there are fewer people in detention centres, et cetera. In fact, the "refugee problem" is greater than ever and the consequences of our brutality have already fuelled ominous legal and societal challenges on our own shores and beyond.

We who care need to fight harder and not lose momentum but instead accelerate efforts to bring about reform, justice, redress and reparation.

If ever there was an argument for a proper Federal ICAC, it is the Minister for Home Affairs, Peter Dutton.#auspol#AusVotes19https://t.co/FBVsCsh4wD

COALITION DERISION OF ACTIVISTS A BADGE OF HONOUR

The Coalition derides activists, advocates, dissenters, protestors, whistleblowers and protectors of those on the marginalia of society.. Their insult should be worn as a badge of honour.

The political and legal ramifications of our mistreatment of refugees will extend far beyond the barbed wire fences.

The suicides, the self harm, the deprivation of medical attention, the physical and mental harm we have caused, the destruction of families that we have authored and authorised to others, means that we will ultimately be held accountable, if not on a national basis then perhaps in an international court and before an independent arbitrator.

FLOUTING OF INTERNATIONAL LAW WILL BRING DAY OF RECKONING

Some of our misconduct not only flouts the United Nations Universal Declaration of Human Rights, but falls under the distinct character of war crimes and torture. The day of reckoning will be late, but it will come.

We are the collective voice of the refugee.  We must in all conscience speak where they are denied a voice. We must walk where they are forced to kneel. We must expose the lie masked as truth.

In all the discussions, interviews and broadcasts I’ve done, not once have I met an indigenous Australian who begrudged refugees refuge in this, their own country.

Why doesn’t the colonial government that has been imposed upon our First Nations, learn from this? 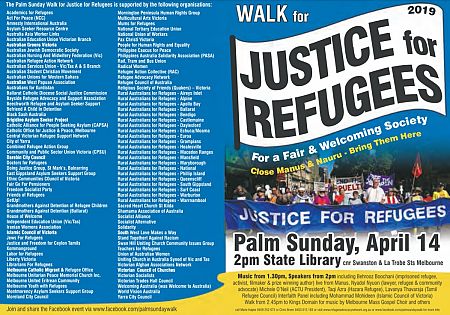 It would be wonderful if you would join me and thousands of ordinary Australians throughout the nation on the Palm Sunday Walk for Justice for Refugees. It is such an uplifting experience.

In Melbourne, we’ll gather at the State Library on the corner of Swanston and Elizabeth Streets at 2pm. Please come along. Let’s support one another. And let us become visible where the offshore refugee is so often forced to be invisible.

Let love not hate overcome the autocratic bullies who squat in our debased parliaments, state and Federal.

The walk is a manifestation of community solidarity for Justice for Refugees  in the face of white nationalism and the "Let’s Make Australia White Again" whitemanifesto.

Let us show our dissent; our rebelliousness, our refusal to acquiesce to political tyranny and treachery; our resolve to champion the refugee and asylum seeker. We are among their number.

It is not weak to speak of kindness, nor to speak of a shared and common humanity and compassion. Nor is it weak for the law, bureaucracy, justice and governance to embrace the human condition, and to designate for social justice and the notion that we all should be the first among equals. These are not heretical profanities.

One of the key speakers will be Manus Island prisoner, Kurdish-Iranian refugee Behrouz Boochani. Ironically, the journalist, activist and filmmaker is the recipient of January’s 2019 Victorian Premier’s Literary Award for his book No Friend But the Mountains.

He will appear by phone link and his entrapment on Manus is proving the old adage that the pen is indeed mightier than the sword. He is a powerful figure on the international stage and, despite all that the LNP has done to disable him, they have failed to imprison his mind, voice and formidable advocacy for refugees and justice.

The Walk is about the community to which we all belong — the human family. Let us not be shy and welcome "them" to the "us" that is Australia.

The fabulous big-hearted Welcome to Country will be led by Wurundjeri Elder Colin Hunter Junior, who is also on the Wurundjeri Tribal Council’s Committee of Management.

Each step in this walk takes us closer to Justice for Refugees.

For us, it’s a mere stroll, but refugees and asylum seekers are still walking the long walk.

Check out the Palm Sunday Walks in your area: australianrefugeeactionnetwork.wordpress.com/palm-sunday 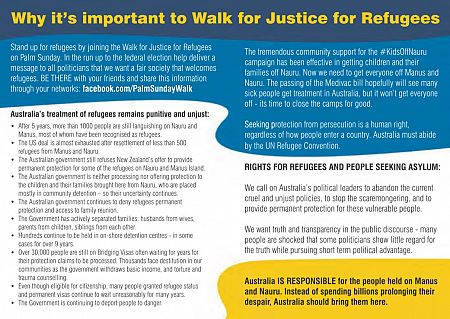 From the Refugee Advocacy Network:

It took over five years, but almost all children are now off Nauru. This is a result of the pressure of the refugee movement on the politicians who said they would never come here. Now we need to get everyone off Manus and Nauru.

Australia’s treatment of refugees continues to be inhumane and unjust.

Join the Walk for Justice for Refugees on Palm Sunday, 14 April 2019.

For a fair and welcoming society, close Manus and Nauru and bring them here.

Walk from 2.45pm to Kings Domain for music by Melbourne Mass Gospel Choir and others.

Half of the speakers will also be at this end of the march.

Stand up for a fair and welcoming society by joining the Palm Sunday Walk for Justice for Refugees in 2019. 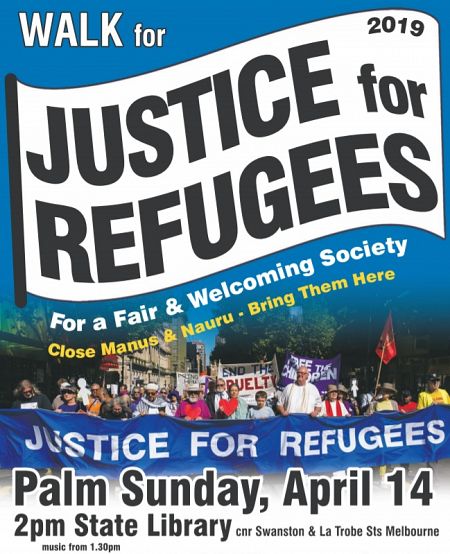 YOU CAN HELP!  Invite your friends, and share through your social media networks.

The Refugee Advocacy Network is a broad coalition of Victorian organisations who have come together to advance a more just, humane approach to refugees and asylum seekers in Australia. If you or your organisation would like to support the network please get in touch.