Don't you just love our Big Chief Lord Anthony John Abbott of Londinium and his White Armband view of history? I know I do.

The thing is, with Lord Anthony, every year is 1788 and every day is Australia Day. What's not to love?

Quite right. One cannot possibly compare such primitive peoples with the likes of Sir Francis Bacon and eggheads like Saint Augustine of Hippo-on-Sea, near Essex.

For goodness sake, they worshipped snakes like the Rainbow Serpent. And they thought the Earth was their Mother. As if.

They go around as if they own the place. Look at Ayers Rock. If it ain't brock, don't fix it.

Why did they have to go and demand it be changed to Uluru? What does that word mean? Who knows where that is? Might as well be in Woop Woop.

You seriously cannot count them as humans. Okay, perhaps a sub-human species — like refugees.

Honestly, not one of them would get a guernsey on the Board of the ABC. For a start, they couldn't speak English. And they had no idea who Don Bradman was. Or that he didn't even exist then.

And name one thing they invented. See, you can't. I rest my case. Even the nullah nullah is a rip-off of the lance that Sir Lancelot gave to his beloved Guinevere.

The didgeridoo is a rip-off of the recorder. No question.

The boomerang is a rip-off of the Patriot missile. It's so bleeding obvious.

And you can't count David Ngunaitponi's shearing machine, because it's nothing more than a rip-off of toenail clippers.

Thank goodness his unpronounceable surname was anglicised to Unaipon for our $50 note. As it should be.

Called the Indigenous da Vinci, David Ngunaitponi lodged 19 patents during his life, revolutionised sheep shearing, devoted much of his time to attempting to achieve perpetual motion, wrote prolifically, and conceptualised the helicopter two decades before it became a reality. His picture has been found on the $50 note (above) since 1995.

Okay, okay, so Aborigines did stick drawing on caves. But what is that compared with Blue Poles?

Told you. This is too easy. Like stealing a whole country from rug rats.

Lord Anthony and Captain James share so much in common it is spooky.

They were both born in November, mere days and centuries apart; Tony the 4th — Jimmy the 7th.

They both adored the monarchy. In Lord Anthony's case, there is a personal sadness since by virtue of his Catholicism, he serves a monarch upon whose throne he is prohibited to sit.

Still, better to be a serf than a knave.

Both share the missionary's zeal for enlightening the skin as well as the ignorant.

We who know better, are better.

Lord Anthony is a superior intellect of a superior race, a recipient of a Rhodes scholarship to Oxford provided by that great imperialist Cecil Rhodes, who gave his name to Rhodesia – later ripped off by African Aborigines and renamed Zimbabwe. Those darkies just can't help themselves.

Our Aborigines are lucky they were colonised by Lord Anthony's kindly civilising people.

Even though I'm a wee bit tinted myself, in moments like these I do defer to the white cells in my DNA.

Besides, so many blacks occupy the other cells.

With a Bible in one hand and a rifle in the other, our white forbears in Dear Old Blighty thoughtfully deported the criminal classes to populate the Great Southern Land and provide labour  for the squatters and Gina Rinehart.

No way could the Blacks build this city. Or any city. Name one.

Every now and again the Blacks had to be pulled into line. For a start they fornicate and breed more enthusiastically than the cane toad, Irish and Muslims put together. That was one reason we had to introduce rabbits — to feed the buggers.

Ungrateful sods. They gave our boys and girls and whalers, syphilis and gonorrhoea. And typhoid. And tuberculosis and trachoma, smallpox, measles, liver and kidney disease, heart disease, introduced them to grog and cigarettes and introduced southern fried chicken to the great southern land.

Truth be known, they probably introduced them to AIDs too. In Africa, via the green monkey.

In Australia, via the Tassie Devil. That's why they've got that horrible tumour disease, I reckon.

If they got a bit uppity, we'd cull them like roos and put poison in their sugar and flour or our gentle menfolk would go and hunt them down after port and cigars.

They were nocturnal creatures and since they did not have a sense of humour, their teeth were rarely bared and so they would shrewdly blend into the heart of darkness from which they emerged in the first place. Sneaky possums.

This week, at the Australian-Melbourne Institute, after his keynote dinner address discussing economic and social outlook, Lord Anthony fearlessly talked about the wallabys in the room.

Responding to a question, he uttered an inconvenient truth on the importance and benefit of foreign investment to Australia [IA emphasis]:

“I guess our country owes its existence to a form of foreign investment by the British government in the then unsettled or, um, scarcely-settled, Great South Land."

There you have it, plain and simple. It's official.

Terra nullius is today as alive and well in Her Majesty's antipodean and colonial government as it was centuries ago — as is the white intellectual supremacy and arrogance that invaded a clearly inhabited land and claimed it as their own geographical orphan.

We lied once and we continue to repeat the lie. As did Prime Minister Abbott. As if we hope the relentless chanting will transmogrify the lie into the truth.

For so many of our Indigenous brothers and sisters, the lie of terra nullius morphed into the truth of terror nullius.

They know this country like the back of their land.

And yet, we have made them refugees in their own country. 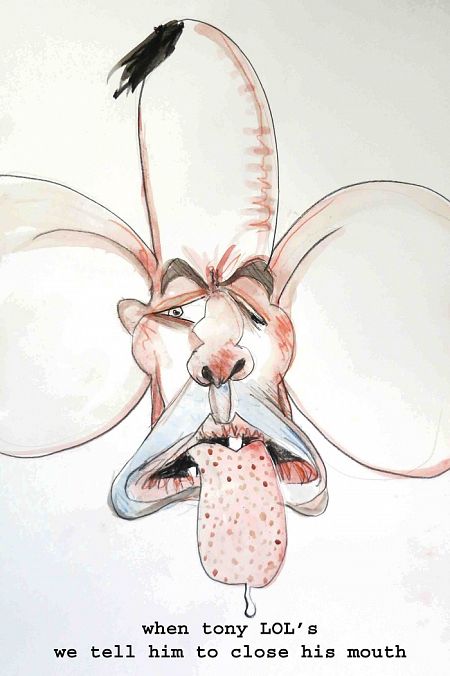