Wake up, Australia! You're being brainwashed by the right

The political narrative of radical conservatives uses linguistic programming to brainwash the populace, says Denise Allen — and it appears to be working. 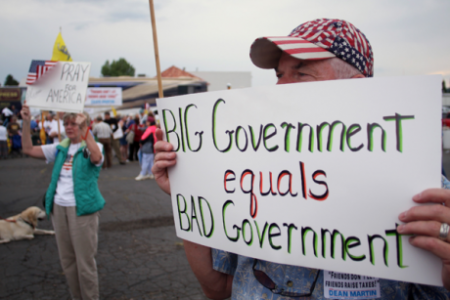 My father used to say:

“If tell someone long enough that they are an idiot they will believe they are.”

(He was condemning those parents who spoke to their children in such a manner.)

You would have to have been living under a mushroom not to notice over the past two years the repetitive slogans and words such as “liar” and “lie” that Abbott et al have repeated ad nauseum in every single Question Time, Parliamentary debate, door stop, TV/radio interview and every press release.

Of course, it is quite deliberate.

But not only that, it is designed.

Conservative think tanks in America have been working on linguistic programming based on neuroscience for the past 40 years in order to “frame” specific wording into their political narrative — in order to brainwash you.

And, oh, how successful they have been.

Conservatives around the world are working off the same doctrine that they have devised over the years through their think tanks in USA such as the Heritage Foundation, the Olin Institute at Harvard and other institutions. These think tanks have been funded by wealthy right wing conservatives for many, many, years in order to set their agenda and so as to convince the people to vote for them, even if it is against their interests.

These extremely wealthy American conservative think tanks – the equivalent to Australia’s IPA (Institute of Public Affairs) – have also devised a political narrative that all conservatives are using around the world.

Abbott et al including their cheer squads MSM and shock jocks have consistently many times a day, every single day for the past two years called the PM a “liar”, that she “lied to the people of Australia” — and, in doing so, have effectively brainwashed thousands in the public into believing it. 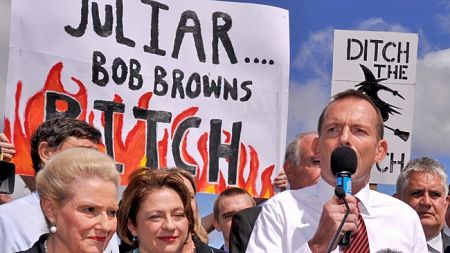 You only have to look at the polls to see how effective their brainwashing has been.

You can be conned by them simply using a change of word.

For example, in order to get the public to vote for tax “cuts” for the wealthy, George W Bush changed one word. “Cuts” to “relief”. Tax relief. Which, with other ‘framing’ of their wording, convinced the people that they were actually helping to “relieve” the wealthy of a terrible tax burden — for to be relief there must be an “affliction” and the person who takes it away is a hero.

Radical Conservatives around the world are also mimicking identical comments to their constituents.

I particularly noticed this when comments Abbott made in China were put to air and not long after comments Romney made in America on China were aired. They were almost identical! I couldn’t believe it and remarked on this on my Facebook page.

A former Labor MP replied that this is a doctrine the radcons (Radical Conservatives) around the world are following and directed me to a book written by George Lakoff — Don’t think of an Elephant: Know Your Values And Frame The Debate.  This little book explains exactly what the Radical Conservatives of the world are doing and how they have manipulated the people into voting for them.

I downloaded this book via Google books for $6.00 and read all 140+ pages in one sitting. It helps when the weather is cold and wet and one is miserable with the flu! Plus it’s a great read and insight into how the people are being conned by Conservatives who claim to have the peoples best interests at heart but are actually brainwashing them with designed “framing” of words simply to get up their extreme right wing agenda.

When you read this little book you will clearly identify that what Lakoff is explaining is exactly what Abbott et al and his conservative shock jock followers are doing.

For instance, recently on Twitter “tweets” appeared decrying Abbotts return to “Howards Golden Age”.  Within minutes nearly every left wing Tweeter had, in condemning the slogan, repeated it — therefore subliminally reinforcing it. That’s exactly what they want you to do.

And, as Lakoff says, progressives have fallen for it hook line and sinker.

Think how many times you have repeated the words “Great Big New Tax” or “Stop the Boats” in tweets or Facebook posts, or in everyday discussion when criticising Abbott.

You are doing exactly what they want you to do.

The mainstream media are also complicit in this tactic. They know very well they don’t have to use right wing terminology, but every day journalists from all mediums, including the ABC, are repeating the right wing mantra — therefore reinforcing their agenda.

Prior to becoming aware of this book, I had thought about this often­ — even challenging journalists to change their wording from “PM backflips” to “PM compromises”. It’s all in the wording — and the journalists know exactly what they are doing,

If you repeat certain words and slogans over and over again, it eventually makes the language normal.

In deeply extreme religious groups around the world – like extremist Christians in the USA (e.g. Paul Ryan) and extreme Islamic fundamentalists – it is all but impossible to change those minds. They are deeply indoctrinated with beliefs they have come to believe as the absolute truth. This is has been done by those doing the indoctrination repeatedly reinforcing the right ‘framing’ of words.

This is what Abbott has done.

“You tell someone long enough that they are an idiot, they will believe it.”

You tell someone long enough that someone is a liar and they will also believe it.

Abbott, like his mentor before him, has divided the country with his constant mantras on refugees. And it has worked, to the point where the Labor Government had no alternative but to implement a refugee policy that, had they had power in both houses, they would never have done.

They tried their darndest to bring down the Government by pursuing Craig Thomson then Peter Slipper.

And when that didn’t work, they drag up events of 20 years ago (that didn’t happen) in order to further denigrate the PM in the eyes of the public.

But Abbott’s consistent parroting, scaremongering and blatant lying over these issues in order to bring down the Government so far haven’t worked. That’s why he said of the PM “she just wont lay down and die.”

Recently, five Tory backbenchers launched an astonishing attack by branding Britons among “the worst idlers in the world”.

Mark my words, it will be part of their agenda to divide the country in order to get support to reduce social welfare in Britain, as they fully intend to do and would have done by now had they not been in a coalition with Liberal Democrats.

But we have woken up. Maybe slowly, but now we know that they will do anything to brainwash you.

It put into words everything I have been thinking.

It is a valuable insight into the twisted, warped minds of radical conservatives around world and the lengths they will go to brainwash you into voting for them.

But we progressives can take back the public discourse.

Challenge, as Lakoff suggests in his “How to respond to conservatives”, those who willingly follow like sheep the verbal outrages and lies Abbott et al make on a daily basis.

Through out this article I have quoted consistently from George Lakoff's book, taking a sentence here and a sentence there. With all due respect to George — it is because I could not have said it better myself and your words said it perfectly.

I urge everyone to spend a mere $6 on Google Books to buy Don’t think of an Elephant by George Lakoff — and encourage all your progressive thinking friends to do so too.