Tony Abbott has turned Australian politics into an ugly bloodsport and destroyed the tenor of Australian discourse — yet now has the audacity to say he is going heal the nation, writes Denise Allen. 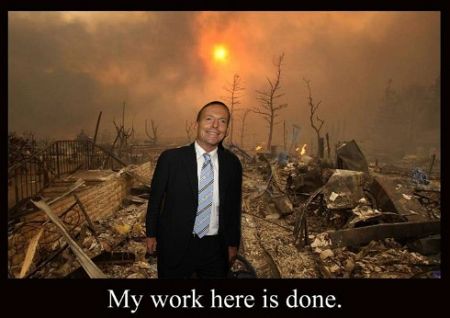 AUSTRALIANS LAST WEEK watched in despair ‒ at least I hope they did ‒ as the conservative right wing side of politics reached depths of ugliness never before seen in Australian politics.

That menu, Howard Sattler and his homophobic questions to the PM, Cory Bernardi and his obsession with bestiality — they all disgraced not only themselves, but the world's impression of us as a people.

Robust political verbal battles are not something new.

But what is new is the new gutter level ugliness that has pervaded our political discourse from the day the Independents gave the nod to Julia Gillard to take the reins of Government.

Make no mistake, Tony Abbott lit the fire, fanned the flames, turned them into an inferno, then sat back and watched it rage; and now − like many arsonists − he has jumped on the fire truck seeking to be one of the heroes that put it out.

From the moment Abbott lost the prime ministership, he has set about bringing down this minority Government and destroying the credibility of Julia Gillard, by any means — fair or foul

His ugly rants in Parliament, his vicious verbal attacks, and the credence he gave to the use of vile language against the Prime Minister when standing in front of "those" placards has given permission to all those rightwing, vicious haters of Labor and, in particular, women, to come out of the closet, put up their hands and voice publicly and loudly the sort of snide, degrading, dirty comments that were once only ever said in the privacy of one's home, or in a sniggering, sexist conversation at the pub.

He has sat back and watched whilst his minions have perpetrated some of the most contemptible attempts to bring down a democratically elected Government in our history. He has branded this minority Government illegitimate, without acknowledging that, had he been given the nod − according to his own theory − he too, would have led an illegitimate Government. And he has ranted incessantly and fallaciously that this is a "bad" Government.

In doing so, he has delegated authority to his band of rightwing lunatics to pursue the degradation of the Prime Minister to its utmost.

And in this, they have all but succeeded.

Like many bullies, Abbott began the brutal debasement, then stepped back and said "it wasn't me!"

He has destroyed the tone and tenor of our politics, and now that it is at its most fractious, he is now attempting to ride in like a hero on a white horse to save us all from this "dreadful woman" he has successfully vilified in much of the public mind.

Not only that, but he has the gall to accuse the Prime Minister of dividing the nation.

What Abbott has done is evil; it is fascism in all its glory — and if you don't believe me, check off the list here.

He and his team have been cunning and crafty beyond belief, backed by a complicit media that chant his lies and deceit without restraint — brainwashing a politically naive electorate into believing he is their saviour. 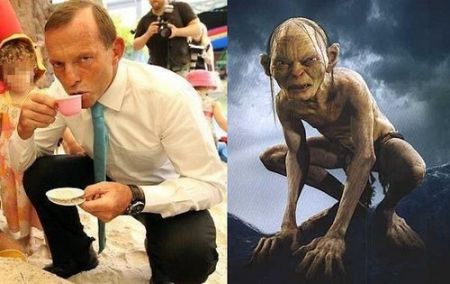 He is a man who will do and say anything, play any game, manipulate any situation, fan any fire — then sit back and watch the hordes fall for it, laughing hysterically like a madman all the way to Lodge.

The truth about this Government ‒ something the mainstream media refuse to tell you by simply focussing on leadership issues ‒ is that it has been a remarkably successful, passing over 600 pieces of legislation so far and introducing some of the most progressive policy reforms since the Whitlam days — such as, for instance, putting a price on carbon, building the NBN, introducing aged care reform, Gonksi, NDIS and unprecedented pension increases.

Abbott and his cohorts may well ride into power on the back of one of the most deceitful, untruthful, ugliest, unscrutinised and vicious campaigns in Australia's political history.

This man must take responsibility for turning this nations political discourse into the ugly cesspit it has become.

And if he can't be Prime Minister, he would rather burn every sense of decency and respect rather than let a woman be the leader of our country.

He hates her, and the fact that it is she ‒ not him ‒ who is Prime Minister, that it's like a cancer eating away at him.

Is this the sort of man we want to lead?

Someone who can produce poisonous ugliness at the drop of a hat and then pretend it didn't happen and/or he wasn't party to it and/or it was created by his opponent — but is utterly incapable of producing costed sensible policies?

Because if it is, this nation is uglier, sicker and sadder than I thought.