Visa applications from China and Malaysia surge due to 'poor policy'

The Coalition Government has argued that the surge in asylum applications from Chinese and Malaysian citizens is just part of normal growth in the caseload. Nothing could be further from the truth.

The surge is entirely the result of poor policy such as the staffing cap, Home Affairs rushing implementation of e-visas for Chinese nationals to save money and a slow response rate when things go wrong, despite the Department's rhetoric about being strong on border protection and immigration integrity.

Chart 1 (below) highlights the surge in asylum applications from Malaysia and China in recent years. 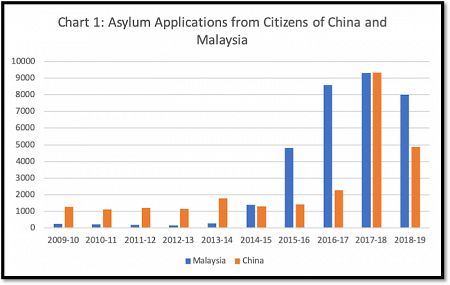 The most likely explanation is that the so-called global integrity system designed to identify visitor and other visa applications that require further checking, which was rolled out in 2016, was not up to dealing with the China caseload. Electronic lodgement of visitor visa applications from China was then introduced (possibly made mandatory) in February 2017. There are reports that in conjunction with these two changes, use of the "auto-grant" facility (that is, a system-generated approval facility) was ramped up.

Chart 2 (below) shows that the ratio of asylum applications as a portion of visitor visa granted to Chinese nationals grew by almost four times in 2017-18 compared to 2016-17 — hardly what would be expected if integrity checking had not been reduced. 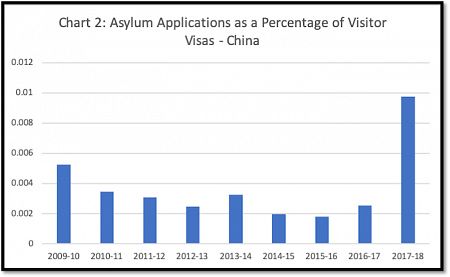 Electronic lodgement meant the experience of local Home Affairs staff in China to spot non-genuine visitor visa applications made in paper form was lost. Moreover, use of auto-grant meant scam organisers could test and identify the types of applications being auto-granted and those that were being referred for additional checking by local staff. With this knowledge, scam organisers could profit by selling entry to Australia on visitor visas together with work rights associated with asylum applications.

It seems the scam organisers have been much cleverer than the global integrity system and the Home Affairs leadership.

The surge out of China in 2016-17 and 2017-18 is particularly odd, given the extent to which asylum applications from Chinese nationals have fallen back in 2018-19. This suggests Home Affairs is slowly responding to the surge.

It remains unclear when Home Affairs noticed the increase in asylum applications from China and, importantly, how it responded. Did it revert to previous systems and processes that had been successful in combating visa fraud in China? Did they allocate additional resources to deal with the emerging problem?

What is clear is that Home Affairs rushed introduction of direct electronic lodgement and auto-grant for the Chinese visitor visa caseload, before adequate integrity systems were in place.

The cost of this is over 10,000 non-genuine asylum applications from Chinese nationals that will cost many millions of dollars to process at primary and review stages. Then there is the issue of what happens to the 90%-plus Chinese asylum seekers who fail to secure refugee status and are likely to be exploited for many years to come.

Chart 3 shows the ratio of asylum applications as a portion of visitor visa grants for Malaysian nationals increased by over 25 times from 2013-14 to 2017-18. Hardly standard growth if the visa system was operating with integrity! 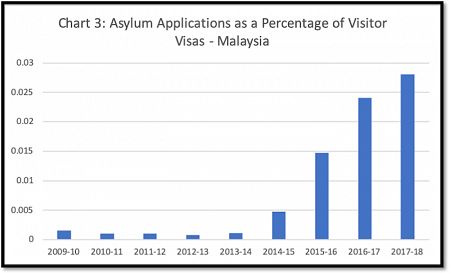 The approval rate for Malaysian nationals applying for asylum remains around 1% to 2%. Indeed, during the period 2009 to 2013, it is difficult to find any Malaysian asylum claims that were approved.

The surge in Malaysian nationals applying for asylum appears entirely due to the general gridlock in the visa system and the slow processing of asylum applications in particular. That has created a honeypot for scam organisers.

Home Affairs Minister Peter Dutton and Department of Immigration and Border Protection Secretary Michael Pezzullo are the obvious culprits for this debacle. But we should not discount the role of Finance Minister Mathias Cormann.

His Finance Department has a long history of being "penny-wise and pound-foolish". Against the background of a rapidly rising caseload, maintaining a cap on the number of visa processing staff and reducing their budget is a classic example of achieving small short-term savings for massive long-term costs.

The funding adjustments were based on marginal cost. This gave the Finance Department a budget bottom line benefit because visa application charges were well in excess of actual processing costs — they in fact often exceeded the average cost. (Visa application charges have increased significantly since then to include a large element of profit to the budget bottom line.)

But even funding adjustments at marginal cost gave the Immigration Department time to implement long-term planning for a larger caseload without allowing massive backlogs to build up, or, into rushing changes as Home Affairs appears to have done.

The funding and staffing restrictions Cormann’s Department has imposed on Home Affairs has not only led to a reduction in immigration integrity and massive long-term costs but it may have also driven Home Affairs into the foolishness of visa privatisation.

That will be where Cormann may well turn out to be the biggest culprit in the Home Affairs debacle.

Abul Rizvi is a former Deputy Secretary of the Department of Immigration and is currently undertaking a PhD on Australia’s immigration policies. You can follow Abul on Twitter @RizviAbul.