By Nick Carson | 27 July 2011, 12:00am | comments |
Labelling the events in Norway the result of extremism is missing the point, says Nick Carson, because extremism is not intrinsically bad and does not necessarily lead to violence.

After recent events in Norway it comes as no surprise that the Australian media are bad-mouthing 'extremism', to quote The Age, as having "no place in our culture". They seem to be collectively missing the point. Having an extreme point of view or ideology isn't a crime in itself. Extremism, regardless of the values or ideologies behind it, not only has a place in a given culture, but is quite essential.

The radical, extreme and experimental have forever been crucial in driving evolution of thought, technology, systems and other elements of human society. But, as recent events in Norway remind us, ideological extremism can sometimes dip into darker realms, entertaining manipulation, inciting hatred or descending into violent acts. As the ideologies driving the perpetrator's actions in Utoya and Oslo reveal, hatred and violence are all too often the domain of right-wing extremism.

Unfortunately, the peaceful, non-violent and progressive public policy or community actions born of left-wing ideology are often ignored or played down as our commercial media selectively digests reality to deliver the portions agreeable to their wider agendas. Some of these media outlets here in Australia, with unashamed right-wing bias, were urging an effective call to arms against the federal government over the carbon price, merely days prior to events in Norway. The subsequent headline "Radio shock-jocks incite violent 'extremist' action" remain unpublished. Our media doesn't incite hatred or violence...does it? Our media isn't extremist...surely?

Recently it emerged the perpetrator of the terrible events in Norway published a 1,500 page manifesto prior to the bombings and shootings in Oslo and Utoya, praising John Howard as "...one the most sensible leaders in the world," drawing many parallels with the Liberal Party of Australia's conservative policies on refugees and Israel. Right-wing extremism has a dark and gloomy history of violent action, at its most extreme descending into downright Nazism. Perhaps the biggest threat to our national security and domestic policy in Australia isn't extremism from overseas in the form of Islamic terrorism, nor is it in extremism from the peaceful left as dramatised by the commercial media, nor is it extremism as a whole, but rather these attempts to incite violent action against a government by right-wing extremist views and ideologies.

It's not just right-wing radio shock-jocks or brainless opinion-piece writers who incite violent action to a misinformed public. The leader of Australia's own right-wing political party, with arguably the most extreme right-wing ideologies in recent memory, has no qualms about standing in front of banners sledging unfounded accusations at opposition political leaders to stimulate hatred against an opposing point of view. Though this might sound like the actions of a political party in a dying North African dictatorship, this is happening in Australia — and it's happening right now. 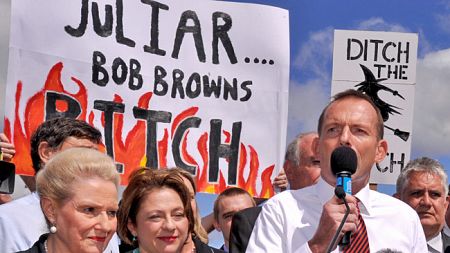 I've never heard of a Green inciting anything more than a forest-embedded sit-in, or an anarchist inciting anything more than justified damage to property, yet their ideologies are considered unacceptably extreme in the eyes of the public as communicated to them by our commercial media. It is the other end of the extremist spectrum in Australia we should be questioning and holding to account.

After all, while the words 'peace and non-violence' are a key pillar of the so-called "extremist" Australian Greens' principles, the same cannot be said of the Liberal Party, a party whose ideologies and views were praised by a person who saw fit to murder close to 100 people in an act of terrorism against a government he disagreed with.

Could it be that our view of what is acceptably extreme in Australia is completely backwards? While polls suggest most of us support one of the most extreme right-wing oppositions in recent memory, we remain misinformed about the implications and dangers of this ideology. Surely the peaceful, progressive and positive actions of our radical or 'extreme' left is the direction we'd rather head in?

I'd rather see the ideological divide between left and right collapse altogether in favour of reasoned discussion and debate to achieve consensus as a people, rather than tearing ourselves apart based on which side of the political fence we fall. Instead of dumbing down debate surrounding extremist views, perhaps we could do with a little more extremism to motivate a disengaged and disaffected populace to participate more in the formation of our government, our society and our culture.