Unraveling the mystery behind the QAnon cult

When a new conspiracy theory appears, don’t ask why, ask who’s running it and to what end. Why are Americans flocking to Q in their millions and what’s in QAnon for him?

Never run after a bus, a lover or a conspiracy theory — there’ll be another one along soon. When a new conspiracy, say QAnon, comes along, don’t bother asking why. In the touted sapientia (wisdom) of Homo sapiens, it’s just a thing we do. So instead of asking why, ask who’s running it and to what end. That’s my enquiry here.

Of course, there’s no point quizzing QAnon followers (anons). They’ve drunk the Kool-Aid plied by the latest hero putting a stop to the latest crisis created by the latest Satanist. The pattern is millennia-old good-versus-evil propaganda. Some of us swallow it greedily like a hungry infant its mother’s milk. Others – the ungrateful whingers among us – protest that we’re being fed pap when we crave substance.

As an aside, arguably, this divide between the thankful and the thankless aligns with the putative cognitive differences between conservatives and progressivists. Do cult followers tend to be conservatives? Are progressives usually sceptics? I’m not sure, but the idea quacks like a duck.

The story goes that this bunch plotted to remove Donald Trump from the presidency, but that Trump – assisted by Q – fought back and is planning to arrest the lizard people in an operation known as “The Storm”. So far, so good.

Since late 2017, Q has made hundreds of online claims about, among other things, imminent arrests, none of which have eventuated. Reportedly, many anons, feeling galled by years of failed promises, are vowing to take matters into their own hands. I guess that would suit Q just fine.

So, apart from having failed Clairvoyance 101, who is running QAnon and to what end? How and why is he attracting millions of followers?

First, the “how and why” question. Typically, cult leaders are clever, persuasive narcissistic sociopaths – that is, both charismatic and deadly – who are experts at exploiting those desperate for answers to what troubles them. So, whenever times are bad, for seemingly inexplicable reasons, wannabe cult leaders will be circling.

Of course, reasons for bad times are rarely inexplicable. It’s just that half the population, rather than keeping an eye on things, prefers to feel relaxed and comfortable. That is until it’s knocked for a six off its recliner and wants to know why.

So, what’s discombobulated so many people that they’re barracking for Q? QAnon theories, says researcher Melanie Smith, appear designed to justify and deepen people’s existing distrust of major institutions and of democracy itself. That distrust is sky-high: 76 per cent of Americans do not trust their government ‘to do what is right most of the time’.

Many Americans are mystified and deeply hurt that their government – like a bad parent – has abandoned them. But the reason is obvious to any keen observer of U.S. politics. Every administration since the 1970s has been a cheerleader for the neoliberal practice of commodifying the many for the enrichment of the few. It’s not the so-called lizard people but neoliberalism itself that’s the cannibal.

Next, what’s in it for Q? Cleverly, in terms of PR, the cryptic Q can be whatever his fans want him to be. Whatever else they project onto Q, they believe he’s a high-ranking patriot — obviously trustworthy, then. Cleverly, given it’s America, is the melding of Q with Pentecostal Christian tropes — another reason for trust. More cleverly than that, since Q wants American youth on side, is how the operation mimics the favourite occupation of tens of millions of young people — gaming. Q is the game master dispensing clues, challenges, dopamine highs and addiction to the game. 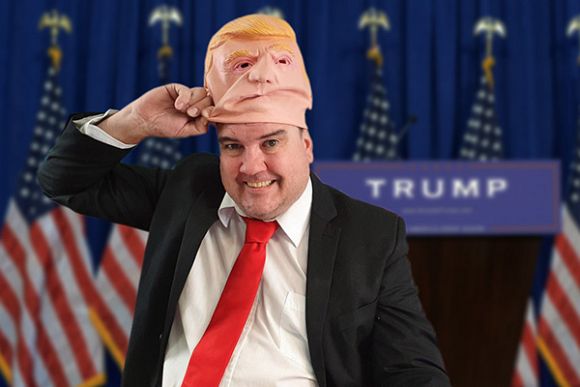 Our idiot experts have certainly had their hands full with idiots this week!

On the “who” question, researchers Bayan Joonam and Marley Clements conclude that as of 2021, Q is probably not a single person but a network of people, which has changed over time and now includes insiders such as retired three-star Lieutenant General Michael Flynn. Yes indeed, the very Mike Flynn pardoned by Trump for lying to the FBI. Trump’s pardon absolved Flynn of ‘any and all possible offences’ arising from the Mueller investigation.

On the night before the Capitol insurrection, Flynn urged his audience not to accept the “big lie” — that Joe Biden won the Election:

The people’s party — a means to what end? Isn’t the end always the same? Power or absolute power, take your pick. More specifically, the American right knows that, due to changing U.S. demographics, it can’t take charge by playing fair. Journalist David Daley reported that the Republican Party ‘would rather try to keep people from voting than lose’.

While the standard endgame is power, the means have evolved since the Hitlers and Himmlers of the past. These days the Trumps and Flynns have the internet. Who knows how many will heed their call to arms next time? Or will “Team Lizard” – just as beloved by the obscenely rich – get in first?