Turnbull continues to backflip as the Coalition's tenuous majority and his leadership remain under constant strain, writes John Passant. 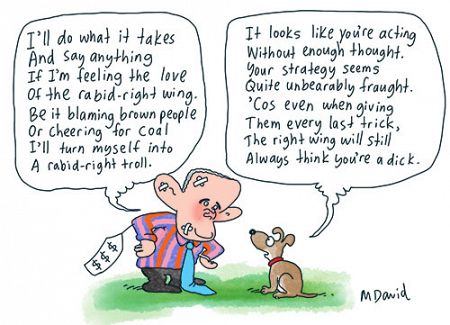 IT IS NOT OFTEN that you see Malcolm Turnbull so happy.

There he was in Tamworth on Saturday night, beaming and basking in Barnaby Joyce’s resounding by-election victory in New England.

On the surface, Turnbull crowing about this being the biggest swing to a government in any by-election appears warranted. With 81% of the vote counted, Joyce had won 64% of the vote before the distribution of preferences — a swing of over 12% to the Nationals.

But there are a couple of explanations for this swing that show the Government’s euphoria will be short-lived.

Second, voters may have had a lot of sympathy for Barnaby being forced to a by-election, based on a constitutional technicality. Joyce gives the impression, carefully crafted, of being a fair dinkum Aussie. If only the rest of us so-called dinky dis could "win" a $40,000 prize from the world’s richest woman, Gina Rinehart.

Third, New England is not representative of metropolitan seats. Its class make-up is different. It has a number of farmers, big and small, whose fortunes have improved in recent years because of increased produce prices. Its working class is less unionised and even less class conscious — in part because of the spread of capitalist community in the regions and the interdependence of workers and their employers on a number of factors including, directly or indirectly, on good prices in overseas markets.

Fourth, the field saw a number of candidates receive small votes of 1% or 2%, which will transfer to Joyce when preferences are distributed.

Fifth, we should remember that in 2010, Independent Tony Windsor won almost 62% of the vote before preferences were distributed.

Finally, there was a high informal vote of over 7%

The Queensland election result is a better guide to how this Government is travelling. The LNP vote fell 8% compared to the last election, in 2015, which was itself an 8% fall compared to the landslide election delivering Campbell Newman and his cronies government in 2012.

Matt Canavan, the resources minister pushing for $1 billion of taxpayer's money to be handed over to Cayman Island company #Adani says that federal politics didn’t affect the Queensland election

Not only that but, contrary to the consensus among most commentators, One Nation did not fare badly. In the 61 seats, the PHONies stood in, One Nation averaged over 21% of the vote and in some seats reached 30%. The Nationals are quite rightly worried that in the medium to long-term, One Nation could replace them as the supposed voice of rural and regional Australia — at least in some of their seats.

So enjoy it while you can, Malcolm, because today it is back to the reality of your incompetent Government ruling for the rich at the expense of the rest of us.

The recently announced Banking Royal Commission is but one example of the problems with this Government and the challenges that face it.

After two years of the former merchant banker, now Prime Minister, telling us that there would be no such Royal Commission – despite the proposal having widespread public support – Malcolm back-flipped. On Thursday, after getting a few hours’ advance notice of the big four banks agreeing that a royal commission was, indeed, needed, the Prime Minister announced the Royal Commission into Banking — the royal commission you have when you don’t want a royal commission into banking. As the Greg Jericho wrote in The Guardian, Sir Humphrey Appleby would be proud.

It is necessary, so the argument goes, to restore confidence in the banking and finance sector, a key sector in the Australian economy with about 9% of GDP attributable to it.

However, this Royal Commission:

One thing is certain. The Royal Commission will not threaten the super profits or the economic rents the big banks make. It is this oligopoly position that the banks protect through their mistreatment of customers, both business and individual.

It is not just the banks to which Turnbull is subservient. The so-called "religious exemption" amendments to the Dean Smith same-sex marriage bill which the Prime Minister will support in the House of Representatives show, once again, that he is a prisoner of the reactionary right of his Party. These amendments have nothing to do with religion or marriage equality — Turnbull is supporting homophobic discrimination against the LGBTIQ community.

Then there is the citizenship debacle. Politicians will supply us with information and statements about their citizenship. Who knows what this will reveal?

One thing seems certain. Turnbull will attempt to refer some Labor politicians to the High Court to investigate and rule on their citizenship status, as part of a cheap political manoeuvre to try to keep his Parliamentary majority.

It is a Parliamentary majority under constant strain, with an incognito Member for Dawson George Christensen at one stage threatening to leave if Turnbull did not resign as Prime Minister, as well as the former member for Bennelong, John Alexander, not guaranteed to win the Bennelong by-election on 16 December. George has stayed, for now.

In the meantime, as the Prime Minister faces his 24th unfavourable Newspoll in a row, what is happening to wages, to public schools, hospitals and transport and to our climate? All we get from this Government is either inaction or cuts. They are trapped between what business demands to help restore profitability and what voters want.

For once, I agree with NSW Deputy Premier and Nationals Leader John Barilaro: it's time to go, Malcolm. And let me be clear, take your whole rotten, incompetent neoliberal government with you.  Let’s have an election now. What could be more democratic?

"Not only did the government consult with the banks on the terms of reference, it set the banking inquiry up to take aim at the only other part of the financial sector that poses a competitive threat to the banks."https://t.co/blkSFWw25c