The Big Four, super profits and a Royal Commission

The super profits of the Big Four banks continue to impact on the rest of the economy and Malcolm Turnbull's solution of ordering them to appear before the Economics Committee is not likely to make them give up those profits.

FOUR YEARS AGO I pointed out that Australia’s banks were, in 2010 and 2011, the most profitable in the world.

Nothing has changed. Australian banks in 2015 were, once again, the most profitable in the world.

As The Australia Institute says:

Personal debt in Australia stands at about 180% of annual income. it may be that the increase in debt of workers mirrors to some extent the fall in their share of national factor income over the last few decades. According to the Australian Bureau of Statistics the share going to labour has fallen from about 62% in 1974 to 53% or so last year, with a concomitant increase in the share of national factor income going to capital, from 17% to 27%). I have written about this elsewhere too.

Making super profits from workers as borrowers is why the banks have, since the GFC, shifted their focus from short term debt to domestic deposits to fund their activities. From not quite an equivalence of funding from domestic deposits and short term debt in 2007, the difference between the two as a percentage of total funding is now around 35%, as this Reserve Bank of Australia (RBA) graph makes clear. 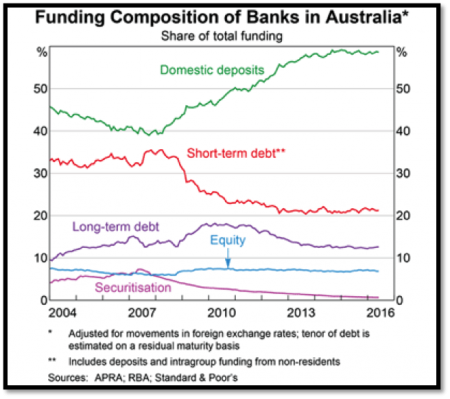 Those increased real funds are then used to more safely fund loans to workers for home purchases, to investors for rental property purposes and to businesses for productive and often unproductive activity. The government and (RBA) strategy appears to be for the construction industry to take up the slack resulting from the end of the mining boom. However, concerns are growing that with a glut in the pipeline for apartments (both for housing and investment purposes) there will be a big increase in investment defaults in the near future. Oversupply will make some of the returns on these investment uneconomic. It will force a slowdown in home prices if not a fall in some cities.

From the point of view of capital overall it makes perfect sense to have a super profits tax which redirects some of the economic rents back to other sectors of capital through, for example, company tax cuts. That, indeed. is exactly what Labor, as the party best able to impose solutions on capital as a whole, tried to do with mining super profits in a very small way with its Minerals Resource Rent Tax (MRRT).

A super profits tax is a substitute for competitive processes in circumstances where competition does not, or cannot, break down the monopoly or oligopoly — in this case of the Big Four. It lowers the return that in a competitive environment new entrants might have caused. The higher the rate of the super profits tax the closer it comes to producing results similar to genuine competition.

The Coalition, as the party of specific interests of capital, repealed the MRRT. The idea of a super profits tax on banks – one that David Richardson and Richard Denniss from The Australia Institute and others have argued for – would provoke a political and ideological response from the banks and the Coalition one hundred times more toxic than that from the mining companies and Coalition in 2010.

In an earlier paper, Josh Fear, together with Richardson and Denniss, estimated that the super profits of the banks in 2010 were in the order of $20 billion a year. While they put this down to their quasi-monopoly position, I would argue these profits can only be transferred from other sections of capital because of the actions of the bank workers in doing all the hard work that produces the result flowing from the oligopoly position of the Big Four.

The banks’ oligopolistic power means that they would pass on any super profits tax in the form of increased costs to Australian workers and business unless there was state price control of their offerings. That is the key to understanding the actions of the banks, especially the Big Four banks. They will do everything in their power to protect their profits, including their super profits.

Reflecting popular anger with banks, anger which is in part driven by an inchoate sense among many Australians that the banks are in fact ripping us off, Bill Shorten proposed a Royal Commission into the financial industry in the run up to the July election. While this struck a chord with many people, it was not enough to win Labor the election.

Of course, Labor’s concern was not just with the impact on workers or even if they could pick up votes with this call. It was also to right a monopoly wrong that distorts capital accumulation for non-banking capital. And the Liberal Party, led by a former merchant banker and as the party of, among other things, banking capital, opposed that.

However, reality has caught up with the re-elected Turnbull Government — a government with a wafer thin majority.

After the election, the board of the Reserve Bank of Australia ‘decided to lower the cash rate by 25 basis points to 1.5%, effective 3 August 2016.’ What this says about the slowing Australian economy is in itself a topic for another article. The banks did not pass on the whole cut to their borrowers. They cut home loans by between 0.1% and 0.14%. So, again, they are protecting their profit.

Bank bosses will be forced to explain their actions every year https://t.co/2t6EQWhOcS #auspol

They did increase term deposit rates to help savers. Their argument is that they had to balance between the needs of borrowers and savers. This is spin. The increase was to term deposits — locked in deposits with locked in interest rates for a locked in period, typically about 8 months. Most people do not have their savings (if they have any) in such fixed term deposits. The rate increases only apply to new deposits after 2 August. And the banks can change that slightly increased rate any time they want. They do it all the time. The term deposit increase was cover for the Big Four protecting their super profits.

According to Sophie Elsworth at News Corp Australia Network:

Estimates compiled by financial comparison website RateCity tipped the banks to make a massive windfall. The largest home lender CBA would collect an extra $475 million a year in interest and the second biggest Westpac would reap $350 million more, while NAB’s miserliness would deliver it more than $300 million. ANZ would net $265 million when compared to having passed on the full 0.25%.

So what to do? Malcolm Turnbull has ordered the CEOs of the banks to appear before the House of Representatives Economics Committee every year. Seriously? That is going to make them give up their super profits? Remember in April this year when Turnbull berated the banks about their activities? Nothing changed, of course. Malcom Turnbull is the wet lettuce man.

Bill Shorten is still pushing for a Royal Commission, which, like the neoliberal Henry Tax Review, will by and large offer up market, not working class, solutions. It may offer some trickle down benefits but we all know how reliable they are.

Of course, we ordinary working people could push for a super profits tax and price controls over interest rates to prevent the Big Four Banks from recouping any such tax. As I argued above, a rent tax is likely to be used to fund tax cuts for business.

We could push for nationalising the banks, although the High Court might find that a step too far. Workers could take over the banks, in effect nationalising them under their own control. The current political climate is far from seeing that on the table let alone being achieved at the moment.

There is one way, however, some workers could cut into the banks’ super profits. Workers in the finance industry could fight for massive wage increases and for increased numbers of full time staff. Any real and militant fight they lead would cut the profits of the Big Four banks and redistribute some of the super profits back, initially, to those bank workers winning big pay increases but over time, to all workers as the bank workers’ pay increases flow through to workers in other sectors.

Of course, I recognise finance union leaders are not going to do this so it is up to the workers themselves. In the current climate, that is also unlikely to occur. So that throws us back to the Keynesian neoliberal solution of a Royal Commission. Tax the super profits of the banks at 100% and spend the money on socially useful programs — not tax cuts for big business. To guard against the Big Four passing the tax on to customers, control the price the finance industry can charge for home loans, personal loans and credit cards.

For more on bank malpractice, we recommend you read the latest IA series of articles by Dr Evan Jones for an in-depth analysis of the parliamentary inquiries into systemic bank corruption.

This week the big four banks refused to pass on in full the Reserve Bank interest rate cuts. #insiders
https://t.co/gnWQg1xrll

Dr Evan Jones' shocking analysis of bank corruption - happening at a bank near you. https://t.co/1jWFNCTyFX @IndependentAus

Big four banks get $3.7b subsidy from the people. They should face a Royal Commission. https://t.co/Gl6drLAcpU #auspol