In his first European visit as U.S. President, Trump's arrogance towards his global counterparts has confirmed his international reputation as a buffoon. Alan Austin reports from France.

THROUGHOUT his first visit to the Middle East and Europe since becoming U.S. President, Donald Trump displayed rudeness, disregard, arrogance and aggression towards his global counterparts.

When he wasn’t being crass and insensitive, he was comical and foolish. The European media – and through them the watching world – responded with disbelief, dismay and ridicule.

An early blunder was Trump’s unprompted revelation that he had not dobbed in Israel during a recent meeting with Russian Foreign Minister Sergey Lavrov, in which he allegedly shared secrets drawn from Israeli intelligence. But in so saying, Trump then clearly did implicate Israel.

The Times of Israel dealt with this folly deftly by quoting at length, with links, the hilarious mockery Trump received from U.S. late-night comedians.

An early victim of Trump’s offensive behaviour abroad appears to have been his wife Melania, who was filmed twice rejecting his attempts to hold her hand. The first was in Israel, the second in Rome.

‘After the gesture at Tel Aviv airport, Melania Trump once again refuses to give her husband Donald a hand … and the frost rages between the two.’

More serious was Trump’s hectoring of leaders of the North Atlantic Treaty Organisation (NATO) countries in Brussels, which Le Monde analysed under the headline:

The blistering editorial asserted that Trump 'lectured them as children' and 'emphasised what divides NATO rather than what brings us together'.

'... counter-productive, finally, because his verbal and physical brutality, manifested in particular by the manner in which the American president has pushed aside the Prime Minister of Montenegro, is not likely to improve the climate between Americans and Europeans, in a context where their unity is crucial.'

This was a reference to a farcical scene not observed in European diplomacy since Attila the Hun shirtfronted Arnegisclus in Bulgaria in 447. Trump shoved aside Montenegro’s bemused Prime Minister Dusko Markovic in order to stand front and centre – with pouting lips and belly sucked in – in a photo shoot.

This was pilloried in news outlets in Montenegro, France, Italy, Spain, Portugal, Greece, the Netherlands, Britain, Norway, Belgium and virtually everywhere else.

Before their first meeting, newly elected President of France Emmanuel Macron had been briefed about Trump’s aggressive tactic of yanking unsuspecting victims off balance with his bizarre handshakes and was not to be sucked in. With his body well-balanced, Macron gripped firmly, moved with the sudden tug, then patted Trump’s arm with a knowing laugh.

This took place, incidentally, after Macron had deliberately swerved to make Trump wait in line while he greeted three other national leaders first. Macron remarked later to Le Journal du Dimanche that this was a small but significant moment in resisting Trump’s bullying:

"I don't believe in diplomacy through public invective. But in my bilateral dialogues I don't let anything slip by. That is how we gain respect."

Media across the world to note this "un moment de vérité" (moment of truth) included Stern in Germany, the Telegraph and the BBC in the UK and most of the French media.

Italian Prime Minister Paolo Gentiloni was openly snubbed when Trump refused to use headphones to listen to the English translation of his NATO summit speech in Italian. Alone at the conference, Trump was seen sitting with eyes shut and a blank look.

"The Germans are evil, very evil." This was attributed to Trump by Der Spiegel and Suddeutsche Zeitung following Trump’s discussions with EU Commission President Jean-Claude Juncker.

"Look at the millions of cars they sell in the U.S. and we'll stop that."

The Commissioner was reported as sternly resisting Trump’s aggression and reaffirming that “free trade is an advantage for all”.

Other embarrassments include a ridiculous sword dance in Saudi Arabia, referring while there to “Islamic terror” instead of “Islamist terror”, Trump telling Israeli President Reuven Rivlin in Jerusalem that “We just got back from the Middle East”, his excruciating message scribbled at Israel’s Holocaust Museum, his ride in a golf cart to a G7 photo op while all other leaders walked and his lack of punctuality, which at least one Italian news journal, Today, highlighted.

Thus, in this first endeavour to establish a persona as an international statesman, Trump has conspicuously failed. This was despite the bar having been set quite low by earlier foreign affairs gaffes made at home.

Europe must 'take our destiny into our own hands' - Merkel reacts to Trump meeting https://t.co/wpncJ7uEET pic.twitter.com/c1AsFBfkyP

According to the Berliner Zeitung:

‘Trump in Brussels caused a scandal. He had accused the majority of the NATO member states of insufficient military involvement.’

"Such a humiliating treatment is to be rejected, something you do not need to accept."

It is unlikely any real damage was inflicted on NATO or global relations generally by this inept performance. Expectations were clearly minimal, as revealed by briefings NATO officials had given on Trump’s inability to function as a normal adult.

Both Newsweek and Foreign Policy quoted a source engaged with preparations for Trump’s trip:

The main outcome appears to be confirmation that the current U.S. President is a buffoon who is all too ready to tweet but with little capacity to bring about solutions.

Hopes remain that he is a harmless fool rather than a dangerous one – given his potential power – and that his minders are able to keep him in check. That is if they can get him to listen to them for more than 20 seconds. 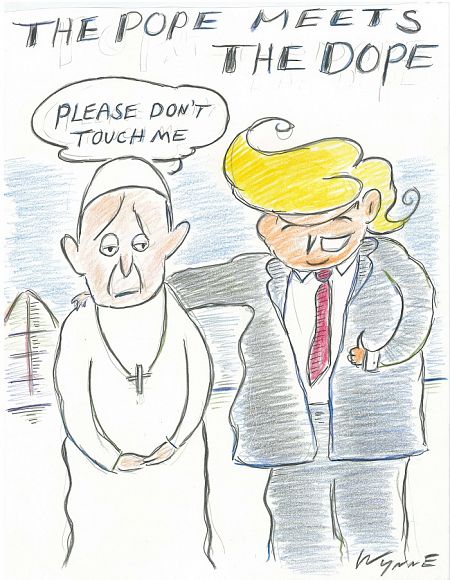 Trump and the Pope, by Terry Wynne

Trump being Dr.  Jekyll and Mr. Hyde with the Middle East and Europe. Listen to the different tones. DOES HE EVEN KNOW WHO OUR ALLIES ARE? pic.twitter.com/QotsCbAClE

Get a world view. Subscribe to IA for just $5