The rise of Donald Trump is a sign of the times, writes managing editor Dave Donovan.

ON THE 26th of September, I wrote:

There is a crisis brewing in the upper echelons of our society. The wisdom our self-appointed betters so generously shower down upon the lowly masses no longer appears to be being received….

.… the prevailing wisdom so seldom seems to prevail in reality. For instance, the elites appear to be pooh poohing the idea of a Trump presidency right up until his inauguration.

And so it has transpired.

The shock throughout our society and the world has been immense. None of the experts, elites, pollsters or pundits saw it coming.

As candidates go, Clinton has her problems and Sanders would have been far superior, but Trump is just appalling — a boor, a bigot, a braggart, a bankrupt and a buffoon; a climate denier, and a crude cad. And those are some of his better qualities. Far more concerning, he is downright dangerous.

But his rise was almost inevitable. Because it is the zeitgeist of our days.

Almost exactly 100 years ago, in February 1917, the peasants rose up and brought down the Russian nobility. They did it because they were tired of the established order. An order that had seen the peasantry suffer through war and famine, while the aristocracy partied on.

Now, again, the peasants are revolting. 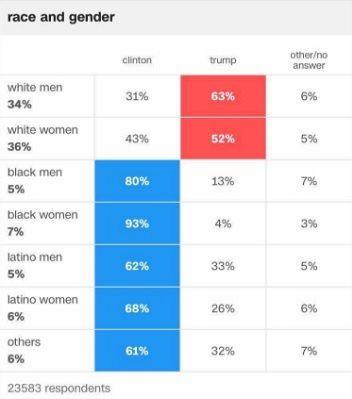 There have been any number of reasons posited over the last few days as to why the great white American heartland rejected the wisdom of their betters, and went with the populist underdog and outsider. All of them may them may tell part of the story, but the real reason why is simply that the underclass have taken a look at the world around them – the one the one-percenters have built – and have realised they don’t like it very much.

They have seen their jobs leak overseas, bailed out the banks while the bankers escaped scot free, and had their sons and daughters sent overseas to needless oil wars. Meanwhile, the rich have gotten richer – much, much richer − while they have been forced to work longer hours for less and take a second job at Walmart to make ends meet.

The people know that something is wrong and only one of the candidates promised to turn the world upside down. And that is why Trump won. Like Brexit, like Jeremy Corbyn supporters facing down New Labour in Britain, like the DNC having to rig the primaries to ensure Bernie Sanders didn’t win, the people no longer want what the masters say is best for them. Even if the alternative is a vulgar spiv with a fake orange tan, groping women in a bad wig.

To hell with it all, they said, flicking the middle finger at their so-called betters. If you don’t like the chess board, turn it over. After all, it is the zeitgeist of our days.

And what will come next? We don’t know for sure, but we do know that it won’t be whatever the experts say. 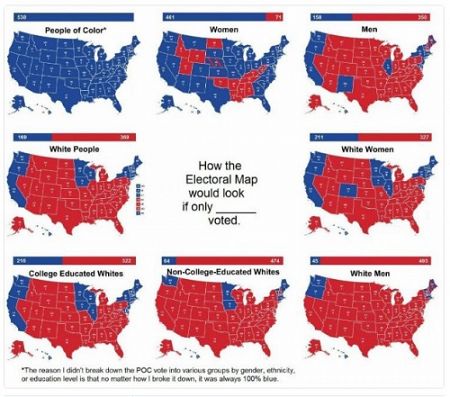 Of course, it wasn't just poor whites who voted for Trump

Trump is likely to be a disaster, but maybe some good could come from pulling the rug out from under the establishment, who have been ruining everything for generations anyway.

Maybe Bernie said it best, reacting to the shocking rise of Trump on Wednesday (9/11/16):

Donald Trump tapped into the anger of a declining middle class that is sick and tired of establishment economics, establishment politics and the establishment media.  People are tired of working longer hours for lower wages, of seeing decent paying jobs go to China and other low-wage countries, of billionaires not paying any federal income taxes and of not being able to afford a college education for their kids - all while the very rich become much richer.

To the degree that Mr. Trump is serious about pursuing policies that improve the lives of working families in this country, I and other progressives are prepared to work with him. To the degree that he pursues racist, sexist, xenophobic and anti-environment policies, we will vigorously oppose him.

And maybe, just a glint of light, while Trump turns America inward, Australia may be able to turn its face to the sun. To develop its own identity and establish its own independence. To escape from playing pawn in America’s global chess game; its constant adventures and everlasting wars.

Of course, the experts won’t like it. But then again, they haven’t been right for a very long time.

Matt Taibbi on President Trump and How America Got It So Wrong https://t.co/SXHL3AZqHp via @RollingStone

You are a subscriber and can't login, email us HERE.

Life expectancy in Republican states around 5 years less than in Democrat states? Interesting. Due to lower income? pic.twitter.com/1LjfObq0O9