Trump and the death of belief

“Belief is the death of intelligence. As soon as one believes a doctrine of any sort, or assumes certitude, one stops thinking about that aspect of existence.”
~ Robert Anton Wilson

If you’re not familiar with Robert Anton Wilson, he smoked a lot of pot, took buckets of mescaline and wrote The Illuminatus! Trilogy.

You may have seen his books in crappy group houses, or in baskets at markets that sell a lot of homemade jewellery. He was called the Pope of agnosticism. Not just because he had whack-job, drug-addled weirdos for followers, who lived in group houses way longer than they really should have, but because he believed in agnosticism about everything. He was also a futurist and, apparently, a prophet.

Please don’t think I’ll be discussing the “Illuminati” or anything else Bavarian at this point. I’m discussing something far darker: the death of belief. I agree that doctrine and certitude should be questioned, always, but now we lack belief itself. How often do we doubt, where we once wouldn’t? You may have noticed that we are truly living in the golden age of “post-fact”.

Donald Trump has COVID-19. Apparently. Do I believe he does? I tilt towards yes, but most sincerely, nothing would surprise me. When all that spills from a mouth is lies and obfuscation, I find it mind-numbingly difficult to believe anything. Throw in the most divisive election in the U.S. since the American Civil War, with countless members of the administration in gaol, or going there — what to believe? 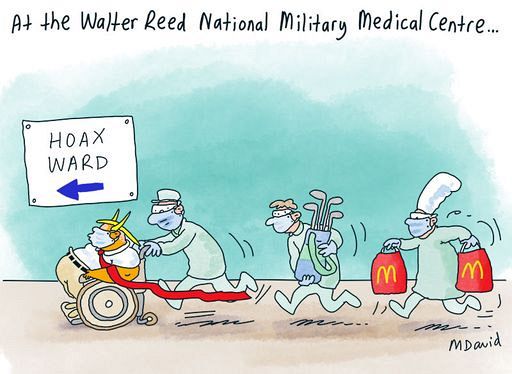 According to White House statements, President Trump has contracted COVID-19, but Dr Martin Hirst says there are reasons to be sceptical.

Is patriotism the last bastion of the scoundrel? Or is it pity? Will there be a “miraculous” recovery that shores up the evangelical vote? There are already countless vigils. And who are holding those vigils? We know the "Proud Boys” are. We know evangelicals are.

Are you? Are you praying, or sending thoughts and feelings, or whatever it is you do when you wish someone well?

Even with mortality, Trump divides.

Do you believe in life and love and light for every living creature? Then you’ll be thinking of, or praying for Trump. Or maybe you’ll take the karma angle, which is a kind of spiritual shrug. Or maybe you’ll be thinking along the lines of so many of those “Hard Realists” that seem to coincidently gather round the Right-wing press and think “C’mon, he’s old. The economy’s more important.”

Trump divides. He’s asking you to question your own morality, right now.

He’s also asking questions of his most strident supporters. Let’s start with his media friends. He doesn’t have many, apparently, but you don’t need many if you have your very own network and friendly mogul. Every state in the U.S. that has listened to medical experts and had a Democratic leader, has been under assault. (The similarities to Australian politics are of course, purely coincidental).

The argument that has been screamed – and often backed by weapons – is that liberty, and the economy, is more important than death. Trump and his supporters (which is probably too gentle a term) think of Trump as the embodiment of the economy, liberty and freedom. He was the WWE Superstar that asked you to believe that his Presidency was real. He asked you to believe that all of his Administration were good guys — then the next week were the bad guys. Every WWE week promised new battles, new heroes, new villains. There was no-one he couldn’t defeat. Kim Jong-un. Stormy Daniels. The first WWE President in history promised us that he would never die.

That is, of course, if you believe.

Because now, as you know, opinion is fact.

During a presser about Trump's COVID hospitalization, the president's physician confidently told reporters "he's back."

"You've seen the videos and now the tweets...he's back."

But when pressed about what that means, Dr. Conley responds "I'm just not at liberty to discuss." pic.twitter.com/KQlSQz59O5