More smoke and mirrors from Rupert Murdoch, as News Corp gets all "scientific" with Big Tobacco, writes Rhys Muldoon.

WITH PROFITS down, News Corp, like many media companies, has had to find new revenue streams.

Earlier in the year, News Corp lost US$1.5 billion (AU$2.06 billion) in just three months. It was so serious, Rupert Murdoch himself, as executive chairman, decided to forego his entire bonus. And those losses keep climbing.

The Australian, a newspaper that has apparently run at a loss since 2008, according to former editor Chris Mitchell, has just found a new revenue stream — Big Tobacco. News Corp has signed a deal, according to an anonymous source, that is “well into six figures”. 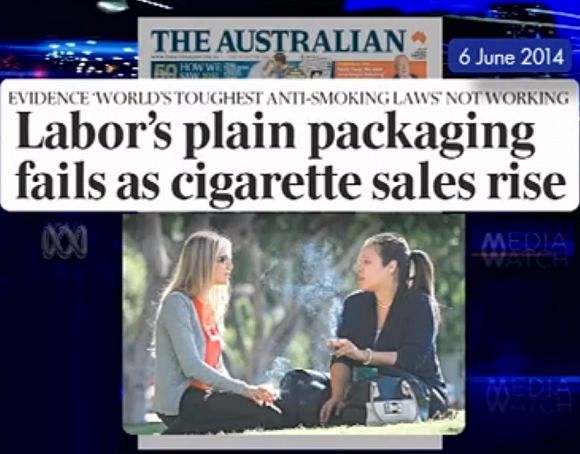 Academics and The Australian go up in smoke

Tobacco advertising has been virtually non-existent for many years. Gone are the days of brands like Black and White ('5 extra smokes for blokes!'), Escort ('Join the Escort Club!') and Virginia Slims ("You’ve got your own cigarette now, baby!”) Now cigarette advertising has to be more discrete. And discrete it is. So discrete, one of the “articles” contains the line: 'While the best thing any smoker can do is quit tobacco and nicotine altogether…' Sound Okay? Sure.

But it goes on:

'The reality is that many adult smokers in Australia will continue to smoke cigarettes – one of the most harmful ways to consume nicotine – unless the government rethinks its tobacco control policy.'

It then goes on to berate 'policymakers, regulators and health authorities', asking that they listen to '...facts, evidence and science-based alternatives...' You’ve probably guessed it. It’s an ad for e-cigarettes.

While the Murdoch press has regularly been accused of being “anti-science” regarding climate change, science is front and centre with these “articles”.

'A better future starts with faith in science' reads the first headline. It then bangs on about how amazing computers are for a while, telling us that knowledge and technology will overcome threats like malware and viruses. Then we get: 'Australians understand this. Sometimes our politicians don’t.'

We are then informed that:

'Recently released research by Philip Morris International (PMI) shows that public faith in science is high, with 80 per cent of people surveyed in Australia hopeful that advances in science will solve many of our biggest problems.'

Uh-huh. We then get into the aforementioned berating of those science hating regulators.

'Follow science to the moon'. 'If our minds are open to advances in science, nothing is beyond us'. Thus opens another “article”.

This one is a meditation on science making the impossible possible and how so many of those darned experts got it wrong. Men like Lord Kelvin, who proclaimed: “Heavier-than-air flying machines are impossible.”

We then are reminded that we went to the moon and that flight has:

'...liberated human endeavour and created a sense that if minds are open to advances in science, nothing is beyond us. Clearly, the answer is never say never.'

Then the same Philip Morris sponsored research is quoted and we get into an identical argument for e-cigarettes.

'We should not let this become another tale driven by mindsets trapped in the present, captive to conventional wisdom and an unwillingness to recognise the potential of science and evidence to solve great problems.'

This third and final example (don’t worry, there are plenty of others) is headlined: 'Even car safety copped a belting.'

This one is a poem to the wonders of car safety and how the seatbelt and science have saved many, many lives. 'In the event of a car accident, the safest place a person can be is in their car with a seatbelt attached.' Helpful stuff.

'Some may still cling to bizarre theories in defiance of evidence, but for the rest of us the science is in and it is unequivocal.'

And you know what comes next — more berating of government, health authorities and regulators.

This one even goes so far as to add:

'Yet our politicians still choose to defy evidence and shun technology which can lead to better outcomes.'

All of these “articles” look like regular articles. There is a small mention in grey, stating: 'Content produced in partnership with Philip Morris.' There is one thing noticeably absent: an author. Where there is normally a by-line, it simply says (in that soft grey) 'Partner Content'.

It’s not often you see such unabashed praise for science in a Murdoch newspaper, but you certainly do here. It’s the best science money can buy.