“I asked my father

I said, ‘Father, change my name’

The one I'm using now it's covered up

With fear and filth and cowardice and shame.” ~ Leonard Cohen

You may or may not have read it, but there’s a rather dark book by Ray Bradbury called ‘Something Wicked This Way Comes’. It features a Mr Dark, who brings a carnival to an idyllic town called Green Town. His carnival is set up very quickly at 3am on 24 October. He grants wishes for money. It gets worse. He wants more than money — he wants souls.

I’ve no idea what Bradbury was getting at, but in unrelated news, Melbourne's Festival Hall has been bought by Hillsong. You may already know this. I “know it,” but there’s a difference between “knowing” and “accepting”. If this is a cri de cœur, may it reach God’s ear.

If you’re not from Melbourne, it’s hard to overstate Festival Hall’s cultural significance. In Sydney, maybe it’s The Hordern, Cloudland in Brisbane or in Canberra, The Uni Bar. You get the gist.

Born in 1913, it’s been home to boxing, ballroom dancing, basketball, The Beatles, Bob Dylan and the Beasts of Bourbon. That’s just some of the B’s. Let’s throw in The Who, the Small Faces, Frank Sinatra, Lou Reed, Pink Floyd and The Clash, Chuck Berry and Queen. Remember André the Giant from The Princess Bride? Him, too. Okay, you get the point. 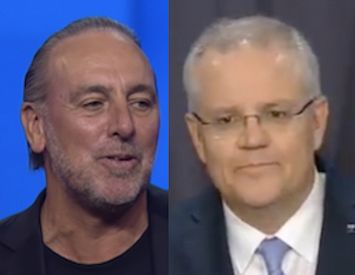 The PM remains mute as his mentor, Pentecostal Pastor Brian Houston, is investigated for covering up child sexual abuse.

I have no idea if you’ve been to Festival Hall, or to Hillsong. I’ve been to both. I wrote a piece a number of years ago for the Sydney Morning Herald – ‘The Day I Booed in Church’ – about my time at Hillsong.

I’ve never booed at Festival Hall. I’ve been there to see bands I like and I’m generally a pretty enthusiastic gig-goer. I tend to be up the front. The last two gigs I attended were, oddly, both Iggy Pop. The most recent one, it was Iggy’s birthday and he was turning 73. If you want to see a miracle on stage (without any strange hands held high in an awkward reminder of an artistically inept, Aryan Austrian) check out Iggy’s 73-year-old torso, creating photographic sculpture, every f***ing second.

Iggy didn’t pass around the tax-free electronic collection plate, no. We bought our ticket and we took the ride. He knew the deal. We knew the deal. Did he give? Hell, yes. And with far more sincerity and vitality than Brian Houston’s slick-suited, tombstone-toothed sorry about his paedophile pater’s profligate penchant for Peter, Paul and Percy.

(An apology I witnessed live, dear reader. No, really, I did)

Festival Hall, the people’s hall, has been sold to hucksters on the taxpayers’ dime (and I don’t mean the time John Wren of ‘Power Without Glory’ fame owned it).

In the words of Brian Houston himself:

Are you in Melbourne right now? Are you in Victoria? You need some good news in Victoria, don’t you? Well, we’ve got some phenomenal news. Since early 2019, we began to talk about Festival Hall. It’s an iconic venue in Melbourne. The Beatles played there, pretty well everyone’s played there... it’s a youth movement. It’s an amazing venue and by God’s grace... we’ve been able to purchase Festival Hall. It is going to become the city location of Hillsong Melbourne... and so we’ve started an entity called, um, (looks to Bobbie Houston) something venues.

“Community Venues! That’s it! Community Venues. And so it’s Community Venues that have been able to acquire Festival Hall and Hillsong Church will be the anchor tenant... I just wanted you to know that during a pandemic, we’re not just splurging out... we want a renovation, two or three floors, a kid’s ministry.”

Trust me, it gets worse. Way worse. It’s like watching a shareholder’s meeting for a company who are worried about ICAC or a royal commission. What it doesn’t look like is anything holy. If you’ve never seen a Hillsong video, get ready. Please play some music you love whilst watching.

Now, where were we? Memory. What was and what is now, gone into a fiery white pit.

Every memory of every band you ever saw, every kiss you had, every drink, every scuffle, every girl or boy you smiled at, every bit of mildly illicit behaviour you indulged in, is being washed away with soft rock and vivid white paint.

I admit to being a strange creature. Yes, I’m a theist. I believe in God, but not in Hillsong. I’m strictly non-denominational. I also like jazz.

Festival Hall, every plank, every nail, used to ache when the place was thumping with the music of the people. It moaned, it ached and it felt like the floor could fall in. It felt, dare I say it, dangerous. If you loved that lyric enough, if those words spoke to you in a way that logic didn’t and you had a thousand people feeling the same way, it felt almost spiritual. Maybe it was.

And now, it’s gone. Gone like so many things that 2020 seems to be so great at gobbling.