‘Government by exclamation mark’ was how I came to think, in the early days, of Abbott’s rule. More and more this seems to be so.

Consider the number of shouts and whispers we heard after MH17 went down.

First the crime, then the cover-up. The criminals will be brought to justice. Putin will be held personally responsible for this act of evil. The worst peacetime atrocity in modern history. Putin ‘not welcome’ in Brisbane. Putin to be denied permission to come to Australia. Putin, if he comes here, will be ‘brought to justice’. Hundreds of millions to be spent ‘bringing them home’. A war should be suspended so we can recover the bodies. Hundreds of millions spent while we wait for the war to be suspended. A national day of mourning. A multi-faith service in a Melbourne cathedral for the innocent dead.

None of this, after Gaza, ISIS and Ebola, seems very proportionate any more.

What was clear from the start, that it was an unintended shooting down of a plane that was foolishly in air space over a war zone and mistaken for another plane, seems the case now, like a six-car pile-up on New Year’s Eve, or a Mediterranean ferry sinking in a storm.

And now we have Putin coming to Brisbane. How will he be treated? As a murderous neo-Communist dictator the ICC should put on trial for crimes against humanity? Or as what he is, the world’s most powerful man, one we should treat pretty gingerly?

The politics of the exclamation mark make it difficult for us either to greet him or to shun him. Did he personally order the shooting down of the plane? Of course not. Is his war on Ukraine illegal? Absolutely. Was his takeover of Crimea constitutional? Possibly. Will we be selling him our uranium and beef again soon? Of course we will.

Abbott and Newman are in a fix of their own making. They are accustomed to dealing with semi-fictional enemies — the wicked people-smuggler, the homegrown crucifying terrorist, the furtive criminal unionist, the heinous Kevin Rudd who personally sent boys into roofs where they were electrocuted — and faced with actual, complex, powerful humans with agendas of their own, they are at a loss as to what to do or say, lest the bad guy … answer back.

It is not beyond the bounds of likelihood that Putin will want to debate Abbott in a public place and Abbott will flee from the encounter. It is not beyond the outskirts of possibility that he will persuade some delegates that Kiev did the shooting-down and doubts will be officially articulated on this score. 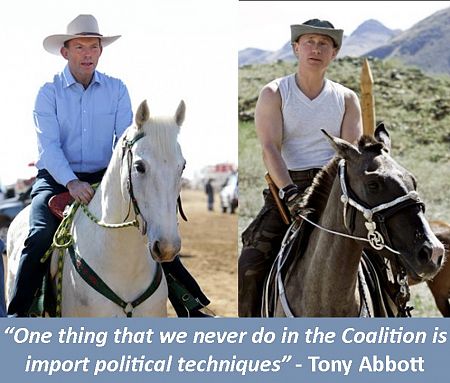 But because Abbott, who deals only in menacing fictions, is unprepared for the real Putin and not just a huffing muppet he wanted not to come here, Abbott, the hyperbolist, will have no words to deal with him face to face, as Bob Carr might have done, and engage him in actual conversation. And will look, as he usually does, a fool.

The Abbott adventure gets worse and worse. Kobane will fall and Abbott will be shown to have been forbidden by Baghdad to send help there. Baghdad will fall and ISIL command the former Mesopotamia. The Budget will be rejected and Palmer demand that Hockey be sacked before any more negotiation take place. Abbott will be too weak to sack him and Turnbull will move against him.

It is no joke to say, as I have every other day for eighty-four days, that this is the worst free-elected government in a thousand years on this planet.

And, daily, it gets worse and worse.

I want to be a fly-on-the-wall when Abbott asks Putin about MH17 at G20. I guess #heyASIO will do it for me ;) 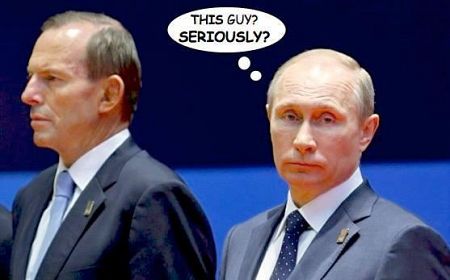 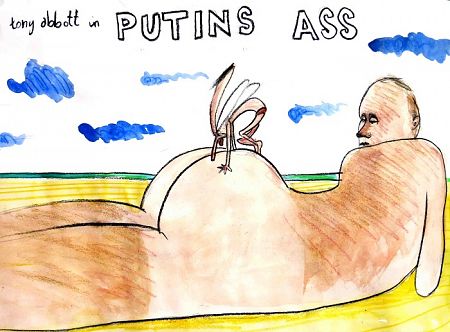