Tony Abbott is a serial copycat who steals his ideas from true leaders, writes deputy editor Sandi Keane, and we should be afraid of what he's concealing.

TONY ABBOTT IS A SERIAL OFFENDER when it comes to borrowing ideas and lines from more inspiring leaders.

He’s even taken a leaf out of the bride’s playbook with the regulation blue ties:

“Something borrowed, something blue?"

“We hang petty thieves and appoint the great ones to public office."

Unless the election result flies in the face of the pollsters’ predictions, our next Prime Minister will be a man who elevated stealing to an art form.

The most egregious example was the centerpiece of his 2010 election campaign.

The "marathon" was surely an original and inspired idea. The would-be Prime Minister would campaign for 36 hours straight, crisscrossing the country, visiting fisherman, bakers, firemen and supermarket delivery men, joking with late-night radio talk show hosts, appearing on early-morning TV shows, and buying flowers for his wife at an all night flower market.

Except the campaign described here was David Cameron’s election campaign, the UK Tory leader, and the date was May 2010.

The two leadership spills in the Government and Opposition turned what was set to have been a ho-hum election on its head — to the delight of political tragics. The promised drama of Julia Gillard pitted against Tony Abbott, a self-confessed junkyard attack dog, convinced Barrie Cassidy ‒ veteran political journalist, host of ABC’s Insiders and one-time IA contributor ‒ to write an “insider’s” account of the election, The Party Thieves.

Astonishingly, on page 214, Cassidy describes the marathon stunt by Tony Abbott as  'an inspired idea'.

Ever heard the playground limerick:

'Copy Cat from Ballarat went to school and got the strap'?

That’s how plagiarists were dealt with once.

IA attended the launch of the book and, puzzled, asked Cassidy why he attributed the so-called “inspired idea” to Tony Abbott — not David Cameron. Australia needs a leader with vision and original ideas, surely? Cassidy nodded begrudgingly, and quickly excused himself to autograph the next book.

Roll forward to the current election, where we now we see Tony Abbott channeling his mentor, John Howard, in declaring the coming election to be about “trust”.

At Sunday’s campaign launch, the Opposition leader called on Australians to take him on trust:

Back in 2004, the slogan 'who can you trust' won Howard the election.

George W. Bush stole the line for his own campaign. But quoting Howard on trust these days is risky, since Australians discovered we’d gone to war in Iraq on a lie.

Nevertheless, Abbott’s slogans, as published in the Sydney Morning Herald on January 30, 2013, were lifted straight from Howard’s 2004 playbook:

Tony Abbott puckers up to his hero in July. (Image via Joe Armao / The Age)

But if anyone in the government dares borrow an idea, Abbott lashes out in high dudgeon.

Last year, the Leader of the House, Anthony Albanese (now deputy prime minister) attracted much derision when he mimicked a fictional Hollywood President played by Michael Douglas in a speech to the Melbourne Press Club.

Opposition Leader, Tony Abbott, seized the moral high ground, censoring the government of having “no ideas of its own”.

But barely a week later, not only did Abbott gazump Albanese’s minor misdemeanor by plagiarising real Presidents, he did so at the National Press Club — then compounded the misdeed by claiming it as his own original work.

What the former journalist and speechwriter for John Hewson did was borrow from Barack Obama and Richard Nixon, as well as U.S. shock jock, Rush Limbaugh — all in the one speech!

Chuffed by the kudos from staffers who said it was good, Abbott responded:

In championing the neo-liberal policy of small government, Abbott said:

"At the heart of Labor's failure is the assumption that bigger government and higher taxes are the answer to every problem."

Which sounded uncannily like Richard Nixon’s speech on February 2, 1973:

"At home, we must reject the mistaken notion ... that even bigger government is the answer to every problem."

Mr Abbott then moved on to solid Opposition ground — the blight of taxes:

"The Government has completely failed to appreciate the iron law of economics that no country has ever taxed its way to prosperity."

"No nation has ever taxed itself into prosperity."

"The current leaders of the Labor Party have failed to understand what Abraham Lincoln knew in the marrow of his bones, that government should do for people what they can't do for themselves and no more."

"I'm a Democrat. But I believe what Republican Abraham Lincoln believed: That government should do for people only what they cannot do better by themselves, and no more."

More recently, in July this year, Abbott was mocked for declaring the emissions trading scheme an “invisible substance”:

"It's a so-called market in the non-delivery of an invisible substance to no-one."

Sadly for Tony, an alert news junkie on one of the comments threads picked up that the line was stolen from London's Daily Telegraphwhich on Feb 19, 2010, quoted Mark Shapiro’s earlier piece in Harpers Magazine:

“And unlike traditional commodities, which sometimes during the course of their market exchange must be delivered to someone in physical form, the carbon market is based on the lack of delivery of an invisible substance to no one."

“...a genuine original thinker in working out that this country might need.”

But Abbott is not, said Marr:

“He’s a political thinker working out what will win him an election.”

Political commentators have always been intrigued by Abbott’s known desire for mentors and heroes. He hero-worships John Howard and seeks regular guidance from Cardinal George Pell.

Marr described Abbott as being an

Not just B.A. Santamaria (of whom Abbott, according to Marr, remained “a devoted foot soldier”) but the Jesuit priest at Riverview, Father Emmett Costello, a Bentley-driving conservative who urged him to enter the priesthood.

Marr raised the question that many commentators have asked — whether Abbott can move out of the shadows as a follower and become a leader?

'He is instinctively a follower — a lackey. The mantle of leadership sits uneasily on him.'

Tony Abbott remains a complex and unknown quantity — a man “wearing a mask”, according to David Marr.

“You don’t know when and if that mask might fall away,” Marr told Robert Manne.

Tony Abbott, ever ready to borrow the ideas of others, asks us to take him on trust. It is surely fair for voters to question just whose trust we’re committing to and whose ideas we’re voting for at the September election. 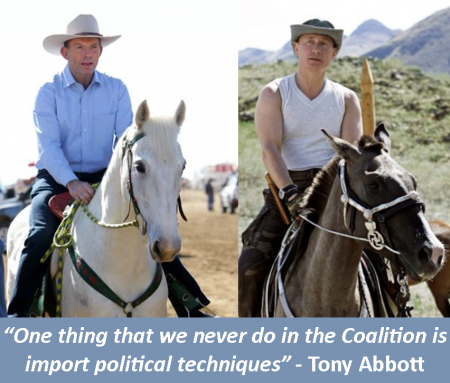