Is the Australian government’s offer of “hundreds, not thousands” of dollars to grieving Afghani parents an insult that puts our troops’ lives at risk, asks Bob Ellis. 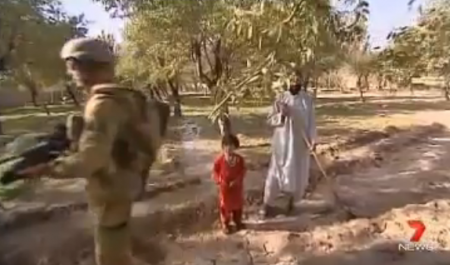 So, some Australian soldiers killed two little boys, but that’s all right, the local people “perfectly understand” and their family will get “hundreds, not thousands” of dollars in reparation. And, of course, an apology.

This is what the Defence Minister, Stephen Smith, said yesterday, and our former Defence Minister, John Faulkner, went along with I guess. John believes we should be in Afghanistan because they treat their women so badly, so he said in a conversation with me.

Whereas we, when we kill their sons, give them hundreds of dollars. Hundreds. So we’re better than them, aren’t we? Of course we are. And anyway, we’re going soon.

Let us imagine some Indonesian soldiers invaded Australia in 2001 and killed my two sons on a cricket field in Careel Bay, and offered me hundreds, not thousands, of dollars in reparation for my loss. Would I have said I perfectly understood, this was a just war that they were waging on the hated Howardite government, so these accidental civilian deaths were fine with me? They’d apologised after all, and they’d offered me nine hundred dollars and I’d said, of course I’d said, look, make it eight hundred, call it my donation, for I hate Howard too… and these things happen. Come to the funeral. We’ll be friends, good friends. We’ll take tea together afterwards.

Does Minister Smith believe this was ever likely? Does he really? How immured in racism is he, or is it culturism, that he still imagines ‘hundreds, not thousands’ is a good phrase to use in such a context — a boast worth making, a useful doorstop sentence, a sentence that will not get more of our soldiers killed because of it, specifically because of it?

How degraded have we become by this ‒ George W. Bush’s first ‘stuff happens’ war ‒ that we value in hundreds, not thousands, these two boys’ lost lives, yet gladly give Cornelia Rau two million for being wrongly locked up for a few months, ten years ago. Hundreds. Not thousands. Two million. Two million. Cornelia Rau.

Like the kids gunned down in Sandy Hook last year, these two little boys will not have graduations, weddings, golden weddings, children, grandchildren, nor a tenth birthday, nor a life on earth. Yet Smith says their family perfectly understands what we did to them last week and wants no more than a few hundred dollars, and an apology of course, for all to be well in Uruzgan hereinafter and none of our Diggers will die there because of it — none at all.

It would not be so, I think, in the case of my two sons in the aftermath of their gunning down — but maybe I am crazy. It would not be so in Sandy Hook either. And maybe those parents are crazy too.

Why are we in Afghanistan? Because the Taliban government wouldn’t ‘give up’ Bin Laden, who was living there at the time. We wanted Bin Laden because a few of his people brought down two towers in New York. We eventually got him in another country, though not the man who protected him, Mullah Omar, who is still at large, and will be part, we hope, of a Coalition government we leave behind after killing more children and, oh, hundreds of thousands of breadwinners and burning their crops and shooting their cows, accidentally, and their goats and chickens, accidentally, and bombing their huts, accidentally, regrettably, and apologising. We got him — and he was the reason we were there for ten years, though he was somewhere else for nine of those years before we got him.

What are we doing in Afghanistan? How many more of their boys will be killed for being nice to us? How many of the Hazara people we have sent back will be killed also, like my friends the Bakhtiari, two nice little boys when I knew them first. How many? How many?

Why are we in Afghanistan? Are we out of our minds?

Can there be some other reason?