WHY DO so many conservative politicians spruik their religious and civic-minded credentials, and then go out and steal the reputations and images of groups or individuals with much, much better ones?

Firstly, Andrew "Handy Andy" Hastie, who shot to fame as the bible-bashing barista / AJ / RWNJ who in 2015 won a by-election for the seat of Canning in WA during the brief and best forgotten reign of the thankfully former Prime Minister Tony Abbott.

In mid-2016, Hastie was abruptly severed from the apolitical Army Reserves for using unauthorised images of himself in military gear for his Federal election campaign material (see above).

In keeping with established Liberal tradition, Hastie was entirely unrepentant, reportedly claiming that the ADF had “used a bit of policy to try and push me around”.

The people of Canning were clamouring to see him in his camos, claimed Hastie:

“I had to decide whose authority I answered to. It was the people of Canning. As a Federal parliamentarian, I don’t take orders from the military.”

With that sort of desire to not take orders from his lawful military commanders, we can be sure the decision to hand Hastie his marching orders was not a difficult one to reach.

Liberal Party's Canning MP Andrew Hastie in breach of parliamentary rules after being booted out of the Army Reserve https://t.co/lkIoiS5BQR

Moving swiftly across to the other side of this great nation, two Gold Coast State LNP MPs have, just over the last month, also been done for doing the devious false endorsement dirty.

First offender was backbench MP Robert Molhoek — a man reportedly more visible to Chinese billionaires than his own Southport electors. Rob was rumbled claiming not one, but two false endorsements in just a little over a fortnight. This could be something of a record and, indeed, may constitute the sole achievement of Molhoek's political career so far.

Molhoek's initial offence occurred in late October, when this acolyte of failed former Premier Campbell Newman was admonished by the 2018 Commonwealth Games Organising Committee for using the Gold Coast koala mascot Borobi on a massive campaign poster. Of course, most politicians possessing an average IQ or above would realise they are not allowed to use pictures of official Games merchandise in party political campaign material unless they had received specific permission to do so (which they certainly never would).

For obvious reasons, this thought, however, never occured to Rob Molhoek.

“I am not sure how you get permission to use a ‘stuffed toy’.”

This was an unconvincing argument, since not being sure about how to execute a simple task is assuredly not an unfamiliar experience for Molhoek.

Molhoek went on to say he and Borobi were “great mates”, proving koalas on the Gold Coast truly are stuffed.

Then, just this week, Molhoek was forced to destroy posters of himself koala-cuddling up to Dawn Crichlow, above text apparently quoting this respected veteran Gold Coast Councillor giving him a resounding endorsement.

Crichlow, however, denied endorsing Molhoek – or, indeed, any other politician – saying:

“I don’t endorse anybody in politics, I’ve got no feelings for politicians whatsoever. I don’t trust them. He should have had the decency to ask me.”

Decency and the LNP? Come on Dawn, you can’t expect a cane toad to suddenly change his warts!

Speaking of which, Burleigh bullfrog Michael Hart MLA also found himself in a pot of hot water over his decision to flaunt himself in an official Surf Life Saving outfit in his campaign posters... 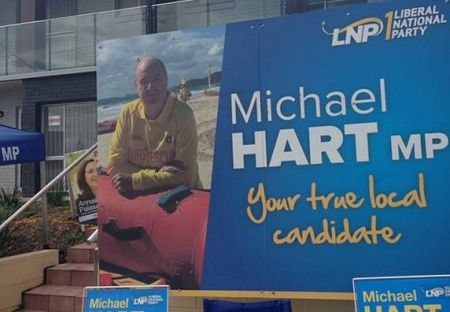 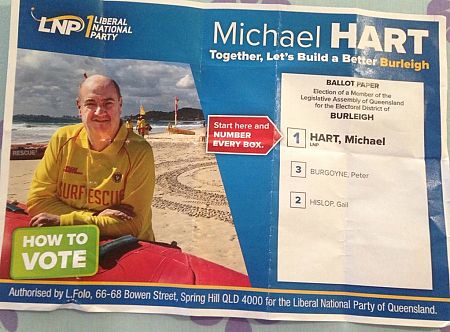 These unauthorised images were used by him for weeks, leading to both the national and state surf life saving bodies issuing statements saying both Hart and his Party had been asked to cease and desist using the images.

“He was told to remove the images by SLS Australia and it took him a week to do so,” said furious former life saver and fellow Burleigh candidate Gail Hislop. “This is just ignorance, or arrogance, or both.”

It wasn’t until Friday last week (17/11/17), after the local media embarrassed Hart the previous day in print and on TV, that the big man eventually took down the posters and told his volunteers to stop handing out the offending cards.

Two of our sitting MP's are under fire for using unauthorised images. @zaphski #QldVotes #9News pic.twitter.com/yfnop6dAw0

Gail Hislop said Hart would have known his use of the revered SLSA uniform was inappropriate:

“Surf Life Saving Queensland is an apolitical and nonpartisan organisation, and I think most sensible people would know that it simply isn’t right for a candidate to trade on their image and reputation for the sake of votes. Michael Hart would well know this is not appropriate. I have previously been a surf life saver, trainer and assessor for Surf Life Saving, and know that Michael making out he did not know it was okay to do so [use the images] is just disrespecting every Surf Life Saver in Queensland."

Unlike Rob Molhoek, Michael Hart is far from invisible in his electorate, being easily able to be sighted from great distances on Burleigh Beach, by even the most myopic voter. One wonders how effective Hart is as a life saver, however, given his general physique more resembles a slightly deflated beachball than a fearsome Straddie shark. It may be pertinent to mention here that to qualify as a lifesaver, amongst other tasks, volunteers need to be able to complete a 400m pool swim in under nine minutes, and then complete a 200m run, 200m swim, 200m run in under eight minutes. This seems like a tall order, even for an obvious fitness fanatic like 57 year-old shadow biofuels minister Michael Hart.

I am with @TurnbullMalcolm on this. Precious time with the grandchildren, beer and all. #politicalcorrectnessgonemad #qldpol #auspol pic.twitter.com/kLSS7883Zd

Incidentally, Michael Hart and his wife own 11.2% of prominent local beer company Burleigh Brewing, although IA would never for a moment insinuate the local member might be getting high on his own supply.

Once again, why do Coalition MPs steal other people’s reputations to enhance their prospects of success rather than being honest and straightforward? Gail Hislop has a suggestion.

“It is typical born to rule mentality that they can do whatever they want to win votes,” she said. “It’s sickening.”

I’ll drink to that.

Labor's candidate for Burleigh Gail Hislop is a small business owner who will be a strong voice for the area pic.twitter.com/nkNtxgs9dl