The mascot of the 2018 Gold Coast Commonwealth Games may have a grim future, with experts saying koalas “face extinction” within five years.

These were some of the alarming reports heard by a group of around 200 Gold Coast residents at a community meeting held in Broadbeach recently (26/10/17) to hear concerns about the policies and actions of the Gold Coast City Council under the administration of Mayor Tom Tate.

Organised by GECKO, the Gold Coast and Hinterland Environmental Council, with the help of local activist group Save our Spit, many of the issues raised concerned the way unsustainable development was degrading the environment of the City and its wildlife. Rampant habitat and species loss ‒ including an alarming decline in koala numbers ‒ the destruction of parks, greenspace, iconic natural features, cherished landmarks and dismay at radical increases in urban density were all concerns voiced repeatedly at the meeting.

It ended with unanimous votes of no-confidence in the Council and in favour of the Council being sacked by the State Government, and an administrator appointed.

You can read more about this meeting in an earlier report published on IA HERE:

One of the most troubling issues raised at the meeting, however, concerned the plight of koalas, a species once abundant on the Gold Coast.

KILLING OFF THE KOALAS

The desperate situation facing koalas on the Coast and its hinterland was devastatingly summed up in a report prepared by a number of organisations dealing with koalas, read out to the meeting by GECKO campaign coordinator Lois Levy. It said koalas faced “the real danger of extinction” on the Gold Coast.

The koala groups said the Currumbin Wildlife Hospital was “swamped with sick and injured animals”, having “taken in 500 from the Gold Coast in the last year alone”.

The tragic situations in which koalas are being found, due to the frenzied pace of Gold Coast land clearing, was breaking the hearts of rescuers, the meeting heard:

“In the northern end of the Gold Coast, development is taking place at an incredible speed …. Across the Gold Coast, koalas are frequently found up lamp posts, in drains and holes, or found wandering disoriented or emaciated, injured or sick. Others are stuck on development sites, completely cut off from habitat, with bulldozers moving in on their last refuge.”

The Council does have a koala management plan, Lois Levy told IA, but it was inadequate, misguided and being ignored.

Said Levy in an exclusive interview with Independent Australia:

“They [the Council] do have a Koala Management Plan, but it's not adequately funded and it doesn't address the primary concern, which is the removal of vast swathes of habitat. So, that they are still passing developments straight through where every single tree is taken off the land, and so there is no possibility of having connections and corridors for these animals.”

Lois Levy told IA koalas would be extinct on the Gold Coast within five years if land clearing continues in the way it has been under this Council:

“… scientists are telling us that, unless something is done in the way of conserving Koala habitat, which of course has other wildlife in it, and corridors so that they can move around, they will be all gone within 5 years.” 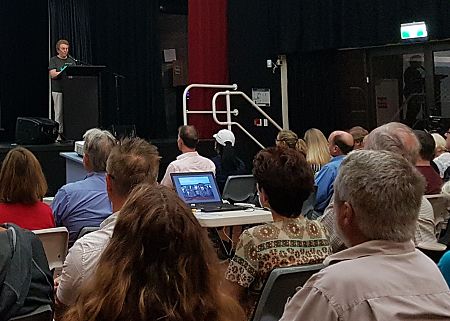 Lois Levy speaking at a meeting of about 200 concerned Gold Coast residents on 26/10/17, which went completely unreported by local media (Image by author)

And it appears that Council is deliberating concealing the truth about the Gold Coast koala genocide from the public.

“… are going to Council that, when presented to the public, are very heavily redacted — that is, large sections blacked out.”

Gold Coast Councillor Peter Young, who was recently featured as a whistleblower in an ABC Four Corners exposé on corruption in the Gold Coast City Council, confirmed the koala groups’ allegations.

He said the reason the Council was redacting these reports ‒ and allegedly lying about their contents ‒ was to conceal the grim future faced by these iconic creatures on the Coast:

We heard today about the hundreds of hectares of habitat loss for koalas. We know that's a fact and yet, all of this year, you will see the Council tell us the amount of protected vegetated cover in the City is increasing. Now, that is really not the truth and I can't tell you anything more than that, because it's all confidential.

But, sometime in the future, that confidential information will be made available to you, and you will see that in fact our habitat hasn't increased in size, it has decreased and it's the best quality habitat that is decreasing at the fastest rate.

The meeting heard that Mayor Tom Tate's Gold Coast City Council administration has not used the Open Space Preservation Levy to acquire any conservation land since 2012.

WHY BOROBI IS BLUE

In a darkly ironic twist, the mascot for next year’s Gold Coast Commonwealth Games is a blue koala named Boribi, which Lois Levy said had “become a joke”:

“We say he is blue because he is so depressed about his own relatives, who are trying to survive in the little patches that are left.”

Councillor Young appeared to reluctantly advocate protests at next year’s Commonwealth Games to bring attention to the sad plight of these adorable creatures:

“I fought hard to secure the Commonwealth Games. I think it's a fantastic opportunity for our City and so it concerns me to even be suggesting this to you. But, as was mentioned before, we've got a blue koala as our mascot. And we are seeing a decimation ‒ a slaughter ‒ of our koalas and other wildlife. So, wouldn't it be the worst thing out for the Commonwealth Games to be associated with the slaughter of those animals?”

This sort of protest could bite, said Sally Spain from Wildlife Queensland (formerly the Wildlife Preservation Society) because:

“Tourists come to see koalas, not a second casino.”

Speaking to IA after the event, Lois Levy said GECKO did not aim to stop development, but just ensure its sustainability, so as to protect vulnerable creatures such as the koala:

“We are very concerned about the natural environment situation, and our species living here on the Gold Coast. Because we can't stop development, but we can certainly plan it a lot better than it is now — to make sure there is still room for our wildlife and our, particularly our koalas, that will be extinct within 5 years, unless we do something pretty drastic, right now.”

“I am very concerned about Mayor Tate's administration. It seems to be increasingly secretive [and] …. I don't think he cares one iota about the environment. And, really, he won't even speak to groups like us, so that indicates to me that he is really not interested, at all.”

You can read a transcript of IA's interview with Lois Levy HERE or listen to the interview via podcast below:

You can also read a transcript of this event HERE and a podcast of the entire meeting HERE. Follow managing editor Dave Donovan on Twitter @davrosz. 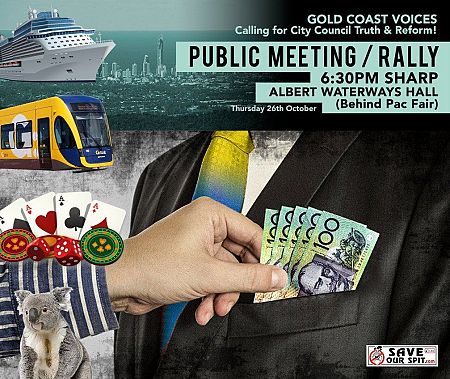