The Right's war on cafe latte

Media editor Dr Lee Duffield looks at the one-sided culture battle being fought against latte-sipping, inner-city dwellers and suggests the perpetrators deserve a kick in the backside from farmers.

THE JIBE about “latte-sipping", "greenie", inner-city dwellers gets a lot of noise but on closer examination, it is much ado about nothing to Australians — except for potentially harming the dairy industry.

The facts suggest that only an ideological fringe really gives a damn if others drink latte; it is after all just milk coffee, nothing that sinister or effete and people all over the country are drinking a lot of it.

Two straw polls have fuelled this report on the purported demon drink: visits to a selection of corner coffee shops to find out how much milk they are ordering in, and a search engine operation to check on the latte rhetoric and the latte facts.

We are talking about the invective in news media against voters in some of the inner-city parts of Australia, like the electorates of Grayndler or Batman, who usually return Labor or sometimes Green members, very rarely Liberals — evidently causing some grievance, sense of injury and exclusion, frustrated sense of entitlement, hurt feelings?

A review of media reports over the last six months or so turns up two points.

The first point is that this anti-latte language is mostly used just by some National Party members and the radical right-wing faction of the Liberals — Senator Eric Abetz coming to mind. Generally, other people in Australia do not use “latte-sipping, inner-city, Green-voting” as a form of insult.

The second point is that the term is used also by conservative journalists among the staff on News Corp newspapers, especially The Australian, putting their opinions and prejudices into columns.

Again, other media are not usually bothered with the tired epithet, maybe more interested in doing some original and creative analysis.

Whatever can go on in Rupert Murdoch’s words factories when somebody is going out on the coffee run? The safest thing for them must be to order Aussie billy tea; sipping a latte may be more than your job is worth.

WHY SO DOWN ON LATTE?

All jesting aside, what is it about the harmless hot drink that causes this element in society to get so upset and out of step?

The offending product itself, café latte, is part and parcel of the coffee and café boom of the last 30 years or so, started a few decades earlier by Europeans who opened coffee shops and put “café latte” on their beverage menus.

Maybe it was the foreign language name that bothered fringe conservatives — too “pretentious”, a feeling then carried over through the years? The later variant soy latte provokes even more trouble.

MAKING A GLASS OF COFFEE

How to make this stuff, so reviled in one small corner, enjoyed everywhere else:

Coffee made with milk is hardly a new-fangled drink. When instant coffee arrived in force in the 1950s, it was often mixed with hot milk, sometimes called drinking “mud”. And even before that, they did the same using Bushell’s liquid coffee extract — very sickly.

HOW MUCH LATTE AND HOW MUCH MILK?

How much latte drinking goes on nowadays and how much milk?

For one thing, the outlets – coffee shops – are no longer confined to the central business district or the so-hated inner-city.

A challenge: if not too choosy, not a “connoisseur”, not a full-on latte-sipping "greenie", you should be able to find a passable café latte in any National Party electorate in Australia. 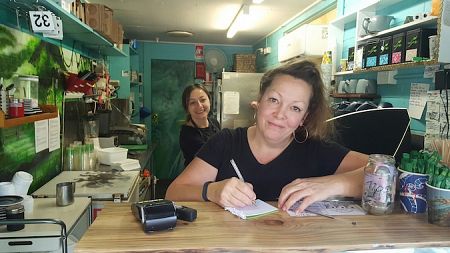 The IBISWorld marketing consultancy says it has counted 14,286 businesses selling coffees in Australia, earning $8 billion in revenue — an industry growing at 5.1 per cent annually and employing 73,329 people.

The Statista organisation has counted 9,900 such businesses.

Both companies inform us their work is excellent, so we must assume they use different definitions — 12,000 looks like a fair number.

Investigating these places, our straw poll focused on three cafes: small ones to keep the results conservative not exaggerated, located, yes, in inner-city suburbs.

They purchase each week, respectively, 400 litres, 300 and 210 of Australian dairy milk, mostly full cream but some 15 per cent of it skinny or enriched.

Do your own arithmetic with the average of those by 12,000 outlets, coming to 18.93 billion litres of milk each year.

The industry body Dairy Australia says its 1.51 million cows, on 5,789 farms at last count, were producing 90.15 billion litres of milk each year.

Considering the amount that goes into processing -- for cheese, ice cream, yoghurt and on and on -- and marketing milk sold to households, it seems unlikely the cafes would be taking quite as much as the 21 per cent indicated by the above calculation.

So the figures are rough but they do show this: the coffee shops are big customers for an important, if somewhat distressed, Australian industry and some people might do better to stop belting into their clientele who drink a lot of milk coffee , AKA café latte.

Out of the politicians among those critical people, the Liberal Member for Corangamite in Victoria, Sarah Henderson, seems to be fighting on two fronts, in two minds.

Ms Henderson has been quoted in The Australian attacking Greens for launching a “latte-sipping campaign” to change the date of Australia Day.

This might be dangerous ground, given that her electorate, even though redistribution has it taking in more of urban Geelong, includes several voters who produce milk, used for, café latte.

"I wish to thank dairy farmers … for attending the meeting I convened in Alvie', Henderson said. She would elsewhere be laying it on thick, also welcoming “the Australian Government's Mobile Service Centre … on a tour of hard-hit dairy regions in Victoria.”

A few more examples — judge by the tone.

The then New South Wales Roads Minister Duncan Gay became fed up with “latte-sipping hipsters of Newtown or Fitzroy”, who should appreciate his work: “It is one thing to sit in your cafe, sipping your latte, and complain about cars and roads…”

I love the new bumper sticker I got in Townsville. Hugely popular up here! pic.twitter.com/pNzpPCTihA

"Don’t take my coal job and I won’t take your soy latte."

Back in Sydney, Lord Mayor Clover Moore got a blast over some Council initiative involving coffee:

A few shots from The Australian — a field day for the columnists and selected blogs:

Application of the term “latte sippers” seems to say: We are different to them, we don’t like them, we reckon you don’t either or at any rate, you shouldn’t.

It’s hardly potent propaganda; not that persuasive, not that constructive and unifying either, nation-wise — maybe something to think about over a coffee.