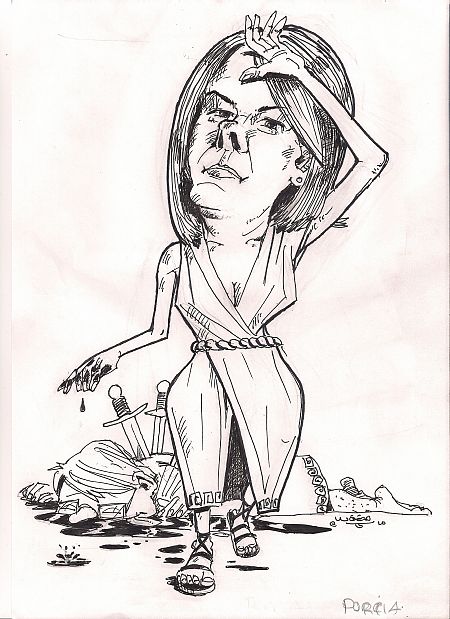 To paraphrase Gough Whitlam — God may well save the Queen, but nothing can save Julia Gillard; and, after the ABC’s Four Corners exposé, she should resign her high office without further delay.

She is in a politically terminal situation and every day she continues to tarnish that high office and the ALP, is a day closer to political Armageddon — the day Tony Abbott becomes Prime Minister and debases the country even further.

This great nation is hurtling towards destruction, all caused by a lack of credible leadership on all fronts.

The Liberals dumped Malcolm Turnbull for Tony Abbott, who in turn created a macabre front bench made up of political miscreants mingled with former Howard time servers of the worst kind.

The ALP dumped Kevin Rudd in favour of Julia Gillard and it seems to have been rueing the day ever since. Ms Gillard’s prevarications on almost every question put to her by Andy Fowler (what a gem of an interviewer my old mate really is) were embarrassing.

Rudd may have been all the things he was accused of – control freak, ego maniac, workaholic – the list is endless, but those descriptions apply equally to  many others in the Parliament; they fit  well to a myriad of politicians — they are part of their job descriptions.

Rudd has one quality found lacking in Gillard and Abbott — it’s called a sense of humour. The bloke laughs at all manner of situations including, it seems, the one he finds himself in now. He said during the 2007 election campaign, which caused the demise of John Howard, that he was “playing with Howard’s mind”.

Well, right now, he’s playing with Gillard’s and his own!

Gillard giggles her way out of serious answers to serious questions; Abbott has a cold, cruel and calculating attitude to everything.

Abbott’s arrogance knows no bounds – God help this country if and when he ever grabs the top job – the thought of the likes of George Pell pulling the political strings is too much to bear.

Abbott will take a leap back into a disgraceful yesterday when it comes to education, health, the Republic, social conscienceness and, of course, WorkChoices.

The man in the street will be put back to where the likes of Abbott and Pell really think he belongs — the gutter.

Gillard deserves a modicum of sympathy for the derision being hurled at her over sensitive issues like job losses and the high dollar.

There is not a great deal she can do about them — and if Abbott has any ideas he is keeping his powder dry and not commenting.

He is leaving that to the hapless Joe Hockey — a decent buffoon who gallons more of the milk of human kindness than the cold and uncaring Abbott (and Pell).

Each day, these days, brings more mayhem and political confusion.

Where, in the name of common decency and love of country is a man or woman with leadership qualities who can fill the breech?

Dare I ask: where is there a Bob Brown when he’s needed the most?