The stupidity of Joe Hockey

There is growing evidence that Joe Hockey is the dumbest Australian politician ever.

He imagines ‘entitlement’ is what a bricklayer aged fifty-five lately thought he had — a pension at sixty-five. He is entitled now, Joe thinks, only to be ‘retrained’ as a shelf-packer, despite his bad back, or maybe a nurse in a mental hospital.

Joe thinks this persecution of future old people will not worry those who are old already. But these he has told he will take away their pension if the inner-city tenement they bought for fifty thousand is now worth a million and they persist in living in it. This is eighty per cent of all old age pensioners and he thinks he has kept their vote.

He thinks all this will improve consumer confidence and they will buy more now, though 10 or 15 per cent of what they spent last year is unavailable this year. He imagines this ‘austerity’ programme, which demands people spend more while earning less, will be the first to work in world history.

He thinks mothers who used to get $1,500 or $2,000 a year to clothe and equip their kids at school will be thankful they don’t get it now. They will ‘trust’ he knows what he is doing, while smoking a cigar, enjoying his wife’s millions and planning himself to retire, not at seventy, but at fifty-eight.

Joe thinks that spending $24 billion, or $1,770 dollars per taxpayer, on a plane that still can’t fly near storms to defend Australia will not be resented, in an era when such planes are never used and drones, which do the work, cost one two-hundredth as much, will be joyfully applauded by the caring parents of the struggling disabled.

He thinks kicking cripples and buying useless planes is a good look.

@TasGreg @davrosz @BarkingMadGC oh and they also decided to buy private jets as well as military ones. #hardlife pic.twitter.com/DANEjHZXOM

He thinks that spending on a sea-search for a plane crash with no survivors as much money as would have saved Holden is a good look, and retrenched Holden workers, and Toyota workers, and Ford workers, and the small businessmen who used to make car parts in tributary industries will understand.

Joe’s great stupidity is to imagine he has the moral stature to do such things, as Sir Robert Menzies, perhaps, or Black Jack McEwen once had. He imagines that breaking promises – no surprises, no new taxes, no kicking cripples – maintains moral stature and does not injure, erode or shatter it.

He imagines he has two friends in Australia, willing to share that cigar with him and celebrate his victory over numeracy — his ruining of his country.

It is not his country, of course.

He believes the heathens do not deserve help, and if the children throw stones, well, rubber bullets is what they will suffer in return. He believes inequality is deserved. It is in his DNA.

If this is unfair, I am sorry — I do not wish to be unfair.

Joe thinks there won’t be many votes lost in the long run if he presses ahead with this innumerate sado-Thatcherist foolishness. But a million votes are gone already, some to Palmer, which will never come back.

It is not as though the Liberal Party is respected.

Its last long-serving prime minister lost his own seat. Its present one, who brought back knighthoods and then thought better of it, and will never bestow another, is thought a crazy man or a klutz by thirteen million Australians who want some other prime minister.

There is no ‘political capital’ for them to draw on. They are regarded by many as whingeing, thick-accented shysters. Many of their own back bench are agape and cannot believe Joe has got it so wrong.

Joe is a fool and will not be Treasurer by September.

He will bow out sweatily smiling, unthanked and unsung, perhaps after being enmeshed in the web of corruption now engulfing New South Wales, his pitch, where $22,000 will buy you a conversation with him.

He cannot survive this week. He is dead as mutton already.

And he’s so dumb he doesn’t see it.

My favourite graph in "Labor's Mess".. (oh wait, somehow they forgot to put it in) pic.twitter.com/YsQL2F3SY3 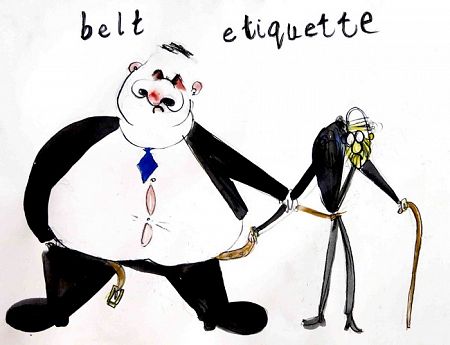