The return of Rudd to stop Abbott 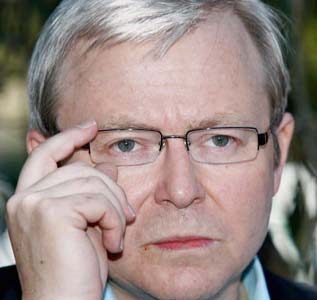 Senior correspondent Barry Everingham says Rudd will lose the vote next week, but win the one following.

Kevin Rudd will arrive in Australia tomorrow to either political oblivion or political resurrection — but whatever his fate, Julia Gillard is dead in the political water.

It is impossible for her to regain whatever respect or dignity she had left and she was shot of both – her appearance on Four Corners sealed her fate.

Next week’s caucus ballot will sort things out temporarily.

A ring around tonight indicates the former Prime and Foreign Minister will live to fight another day; the gap is narrowing between him and Gillard, and if there is a spill and he loses this time he’ll win next time.

And if this comes to pass, Australia will be the winner — Rudd can and will stop Abbott’s race to The Lodge.

He’s more popular than the failed seminarian, and women – who are not at all keen on the bullying tactics of the Opposition Leader – will be a big help in getting Rudd over the line.

The disgusting denunciations of him by his former ministerial colleagues show the depths to which Australian politics has descended.

It gives credit to the old political adage that anyone who wants a friend in politics should get a dog.

Rudd of course is not blameless in the matter — he didn’t recover from the knifing he got when Gillard got the top job.

The ALP seems to have forgotten that Rudd won them a massive victory and got rid of Howard to boot — that makes him a hero to most Australians.

If the theory that Rudd can beat Abbott is correct, then his resurrection should be encouraged.

An Abbott Government will be a march back to a yesterday from which the country will take years to recover.

Importantly, the spectre of Tony Abbott marching around the world as our Prime Minister would give the impression we are a nation of thugs and troglodytes — his gorilla like swagger gives the impression he is entering a boxing ring.

That, coupled with his mangled stutter, has all the hallmarks of a boxer whose brain has been damaged by constant punching.

Then there’s his adoration of Cardinal George Pell — arguably the most divisive Australian Roman Catholic cleric since the egregious Irish Archbishop Mannix.

Every piece of Abbott’s legislation will need Pell’s imprimatur.

As though that isn’t bad enough, consider the input of the likes of Michael Kroger, Hugh Morgan, Gina Reinhardt, Andrew Bolt et al.

Abortion, contraception, stem cell research— back in the basket.

History — rewritten by the likes of Windschuttle and Bolt.

Work choices — back to the Howard plan.

Climate change — the deniers will have a field day.