The Abbott Government is transparently using nationalism to drive a conservative political agenda — and it could backfire disastrously, writes Simon Tatz.

AUSTRALIA IS THE GREATEST COUNTRY in the world and to say otherwise is un-Australian and un-patriotic.

This is the growing sentiment being expressed not just by overly proud (patriotic?) citizens and some zealous media commentators, but also by members of the Federal Government.

The ABC has been accused of failing to adhere to the standards of nationalistic jingoism.

“… instinctively takes everyone's side but Australia's.”

Mr Abbott’s message is unambiguous: our armed forces don’t, and never have, done wrong and to report ‘allegations’ – such as the mutilation of suspected Taliban members or the physical mistreatment of asylum seekers – is un-patriotic and against our national interests.

Playing the nationalism card is an old political trick.

American President Ronald Reagan often chided his Democrat opponents for “talking down” America whenever they raised issues like the failing U.S. economy. Reagan was the master of labelling his political opponents “un-American”. This type of appeal to a sense of nationalism is increasingly being used to silence or demonise those who hold contrary views to the Australian Government.

Mr Abbott’s use of nationalism is best characterised by Benedict Anderson in his landmark work Imagined Communities: Reflections on the Origin and Spread of Nationalism.

In brief, Anderson wrote that communities are imagined because we never know most of our fellow citizens; we don’t meet them, talk with them or share religious, political or cultural affinities, yet in the minds of each person lives the image of being in communion. And this imagined community can be harnessed by leaders to further their aims, which more often than not are militaristic.

Australians can all unite to cheer their national team ‒ to stand as one against the Poms ‒ and yet many of the same people we sing the national anthem with and share the spirit of camaraderie with can and do hold completely divergent beliefs and views on other aspects of life.

There was a shared a sense of community around the Sydney Olympics, but this dissipated the moment it was over. Not long after the fleeting sporting events conclude, differing politics, religion, values, norms, customs, socio-economic status, geography, demographics, and customs remain as dividers and demarcations of Australian society.

As an aside, I watched Catherine Freeman win Olympic gold at a pub in Ballarat.

Some of the patrons actually booed Freeman’s victory and yelled racist remarks at the TV as she accepted her medal. Nationalism can’t always override racism and prejudice, which is why some leaders need to find common enemies.

Anderson sees the nation as

‘… an imagined political community – and imagined as both inherently limited and sovereign.’

Nationalism is not the stirring of a national consciousness, it is an invention designed to unite people around a ‘boundary’, often presented as a common enemy or threat. This boundary can be physical — it’s our territorial waters and these asylum-seekers are ‘illegally’ crossing into our territory; or it can be based on alliances — these people are different to us, they didn’t line up in a queue, they commit crimes and live off welfare, so we don’t want that type of people here.

To Anderson, the imagined nation

‘… is always conceived as a deep, horizontal comradeship. Ultimately it is this fraternity that makes it possible, over the past two centuries, for so many millions of people, not so much to kill, as willingly to die for such limited imaginings.’

Our current political leadership and likeminded commentators are ‘imagining’ an Australia that is limited and sovereign. Their sense of nationalism is defined by the threats to us by ‘others’. We have seen the dangers of this in Europe over the last few hundred years, and while Australia isn’t about to take up arms against a neighbouring country, or massacre particular groups, the rhetoric is nevertheless becoming eerily familiar.

Fostering this sense of nationalism and patriotism requires the use of icons and artefacts as rallying points.

The Abbott Government is busy trying to create an agenda of people, institutions and symbols that are ‘Australian’ ‒ whatever that actually means ‒  so that those who suggest otherwise are, by default, un-Australian and against ‘us’.

The catalogue of what is ‘un-Australian’ now includes the ABC (SBS has never been ‘Aussie’).

Mr Abbott and his entourage know exactly what they’re doing in trying to place the ABC outside the imagined notions of Australian values and culture.  The ABC is for ‘lefties’ — your inner-city types, the chattering classes and, if you’re a real Aussie, you’ll see it as a threat to the national interest.

They are using nationalism to drive a conservative political agenda.

The risk this tactic faces is that Australia lies in the Asia Pacific region, where countries much larger and more powerful also use nationalism to unite disparate and diverse peoples behind a common cause or boundary.

And it just might be Australia they decide to unite against.

Simon Tatz is a former ABC employee and was chief of staff to the minister for higher education and regional communications in the Gillard-Rudd Government. 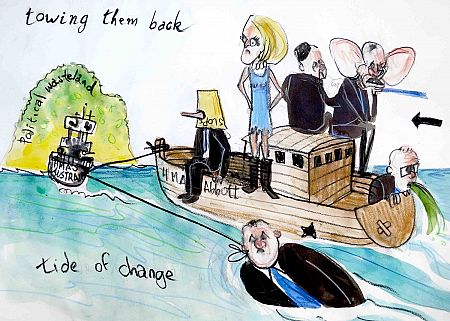 Talking tough on 18C from the safety of parliamentary privilege

Drugs in sport: Time to end the war

3 March 2014, 11:00am With drugs in sport leaping back into the news, Simon Tatz says it's time for ...
Join the conversation
comments powered by Disqus
News updates