The Morrison Government is on the nose

As the Morrison Government's moral and leadership failings mount up, boasts of "electoral invincibility" may instead form an ironic political epitaph, writes Tarric Brooker.

AT THE DAWN OF 2020, the Morrison Government found itself well and truly on the ropes, with the backlash from its mishandling of the bushfire crisis and Prime Minister Scott Morrison’s secret Hawaiian getaway severely affecting public confidence.

Then when the coronavirus crisis arrived on our shores and the Government decided to shower selected members of the public with money from the sky, suddenly, the Prime Minister could do no wrong.

Despite a litany of failures in 2020, including JobMaker creating just 609 jobs out of a projected 450,000 and the government-backed small/medium business loan scheme lending out just five per cent of the funds committed, the Government continued to ride high in the polls.

According to Newspoll, Morrison had recorded near record-high approval ratings since April last year.

While there are questions from some quarters about the accuracy of Newspoll’s figures, polling from Essential, has been very similar.

But in recent days, there are signs that the Morrison Government’s Teflon coating may finally be wearing out.

According to the latest Newspoll, Labor has maintained its 52-48 lead — its strongest result since 2 February last year.

Meanwhile, embattled Federal Queensland MP Andrew Laming will step down at the next election, after a series of scandals and abuse allegations.

Despite senior Liberals such as Treasurer Josh Frydenberg defending Laming’s continued presence in Parliament until the next election, we may be seeing the first signs that the Government is beginning to really feel the heat.

In the recent past, embattled Coalition MPs have generally enjoyed the strong support of their party’s leadership amidst various scandals and allegations of wrongdoing.

2 weeks after being asked on ABC 7:30 Report by Leigh Sales "How good does it feel to be a minister in the Morrison Government knowing that no matter what questions arise over your conduct your job's safe?" and after even more exposes - still doesn't answer the question ... pic.twitter.com/ijfUxKkIC3

In the words of 7:30 host Leigh Sales to Frydenberg a few weeks ago:

“You look at ministers in the Morrison Cabinet. Angus Taylor is still there after publicly releasing a fake document about the Sydney City Council, Linda Reynolds is there after apologising for mishandling a rape allegation in her office, Peter Dutton is still there with the Auditor General potentially taking a look at how he's awarded government grants.

The Prime Minister hasn't even read the details of the serious allegations against the Attorney General, let alone stood him aside to make further inquiries.

How good does it feel to be a minister in the Morrison Government, knowing that no matter what questions arise over your conduct your job is safe?”

But now, several scandals and a couple of weeks later, the once seemingly impervious Morrison Government is looking vulnerable.

With the next election possibly just four months away, the idea that this Government is invincible is looking quite shaky.

Whether Opposition Leader Anthony Albanese and Labor can capitalise on the long list of Morrison Government mistakes and scandals remains to be seen but the opportunity is certainly there.

After almost two years of being relatively disengaged with Federal politics, the Australian electorate has emerged from its stupor frustrated that the Government can’t seem to manage even the most basic level of decorum in the Parliament it presides over.

In this atmosphere of uncertainty and with the budget coming up in a little over a month's time, all this may once again be put on the back burner in the face of more cash goodies from the Government, just like last year's mismanagement of the bushfires.

Currently, the Coalition’s ongoing moral and leadership failings continue to be the chief concern for the electorate. if Anthony Albanese can demonstrate that Labor can effect genuine change for the nation, this Government’s boasts of “electoral invincibility” might end up part of an ironic political obituary.

The Morrison Government is out of time, out of ideas – and at the next election, they should be out of office. pic.twitter.com/btWvcImRD0 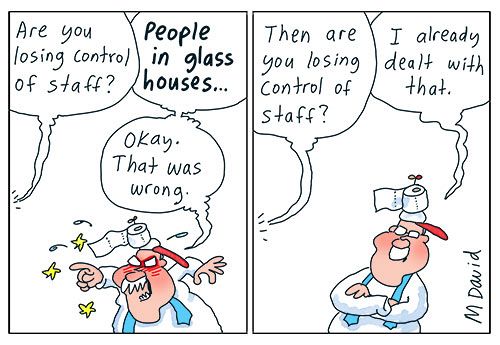