With Newspoll showing Labor back on level ground, Bob Ellis considers why it all went so wrong for the Liberal Party so quickly. 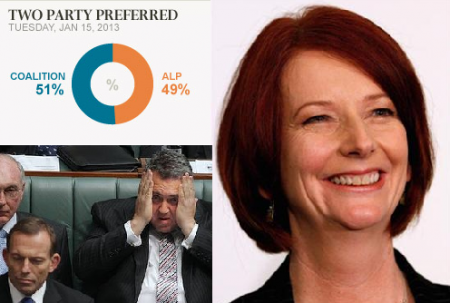 NEWSPOLL SHOWS Labor’s base vote back where it was, 38, when it won a negotiated victory in 2010.

It is likely 4 per cent of the ‘Other’ vote is for the Katter Party in Queensland, whose Newman-hating preferences will probably drift to Labor, putting it on 50 or 51 two-party preferred. With an adequate campaign, this means Labor would win outright in August or November, after it is shown Abbott’s figures do not add up.

Its numbers will improve when the honest poll, Nielsen, comes out in two weeks and shows Labor on 51.

Why did it go so wrong for the Liberals so quickly? They cannot now win in Victoria or South Australia, and Labor has to be in with a chance in Queensland, where Newman sacked firefighters in time for this most dangerous summer of all. But why did it go so bad for them federally?

It’s because, I think, they no longer have secrecy on their side.

For most of their history, they could hide their incompetence under big lies: that China would soon invade us; that this could be avoided if we beat back the ‘Communist menace’ in Vietnam; that Afghanistan should be invaded because Bin Laden lived in a cave there; that Iraq should be bombed flat because big bombs were being built there; that boat people were the Taliban in disguise with kidnapped children they threw overboard; that Hicks, Haneef and Habib were terrorists; that the GST and WorkChoices were dead and buried; that Wayne Swan was ‘the most incompetent Treasurer in our history’; that Campbell Newman had no intention of sacking thirty thousand public servants; that global warming was ‘bullshit’; that Thomson was a whoremonger and Slipper a kind of rapist of men; and so on.

For now, in the age of Assange and the social media, it’s no longer possible, or it’s very hard, to prevail by spin, fudged facts and big lies any more. No-one anymore believes Hockey can add, or Abbott knows what he’s doing, or Newman cares what happens to ordinary people, or O’Farrell is not the fond friend of racketeers and gun fiends. The jig is up, their cover is blown, and they can’t get the kindly-koala mask back on, and the sneering-jackal is showing. Their situation will get worse in the coming months, as the Slipper caper and the Thomson frame are revealed, and Hockey is obliged to say which eighty billion he will cut from whom.

It’s what happened to Romney in October.

And Abbott has to show, after the hottest day in our history, why global warming is bullshit. Campbell Newman has to show why sacking nurses and bushfire-fighters helps anyone. They’ve been smoked out, and there’s nowhere for them to hide — no sheltering lie to cower under, any more.

If there’s one thing above all other things that has done for them, it’s their nastiness.

The hounding of Haneef and Hicks and Kirby and Kernot and Thomson and Slipper, the immoderacy of their baiting of Gillard – ‘deliberately barren’, ‘she should die of shame’ – show private school bullies in hot pursuit of the new little kid in the dorm: push his head down the toilet, there’s the go. They’ve tried on the ‘character issue’ and it’s exploded, like a shit-bomb, over them. Who would you rather have to dinner in your house, Pyne or Craig Thomson? If the answer is Craig Thomson, they’re in big, big, trouble.

Or, to put it another way, who would you rather send to help sort out the Middle East, Bob Carr or Julie Bishop? You see the difficulty they’re in. The truth has caught up with them, and, for the first time in their sixty-nine year history, they’re cowering and cringing in its flashlight.

And there’s nowhere for them to hide any more, and lie, and bluster, and wriggle.

And the adventure, probably, is over.